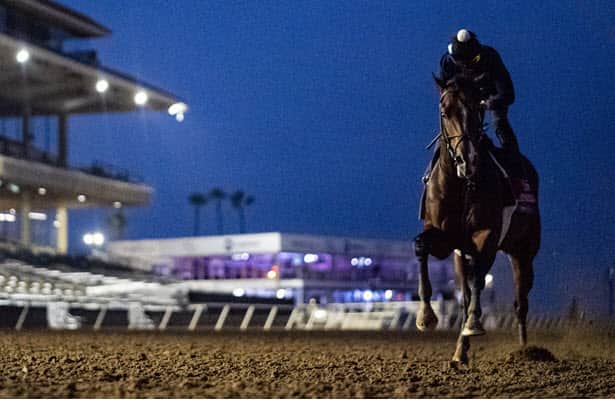 On a day such as Breeders’ Cup Saturday, it could become tempting to bet all races. But this post will exclude three of the them, partially because it does not seem realistic to bet every single race on the card and win.

Nevertheless, here are thoughts and betting ideas on most of the Breeders' Cup races on Saturday at Del Mar, including the ones that compose the late Pick 5 and ending with the $6 million Breeders’ Cup Classic.

The Dirt Mile contains a boatload of speed.

Besides Life Is Good, runners such as Pingxiang, Jasper Prince, Eight Rings and Ginobili all own enough speed to set the pace in most normal Grade 1 races. Even though Life Is Good owns more ability than them, there is a reasonable chance those four speed horses can weaken him.

If the pace heats up, Silver State can take advantage of the meltdown. From a class standpoint, it would not come as a huge surprise because Silver State already won the Metropolitan Handicap (G1) earlier in the year. In his two most recent starts, he ran second by a head in the Parx Dirt Mile to multiple Grade 1 winner Mind Control and also closed for third in the Whitney Stakes (G1) behind the Classic favorite Knicks Go.

It might take some effort to beat Life Is Good, even if he becomes tired because of the pace, but Silver State’s best run can get it done.

Jackie’s Warrior holds the advantage of being able to set a fast pace and still kick home in a powerful fashion. This is an ultra-talented sprinter.

Matera Sky owns speed, but there is no reason for Jackie’s Warrior to fear the Japanese-based world traveler. When he ran in the Sprint two years ago, he initially chased in second before fading to last. In Matera Sky’s most recent start, he was fifth and lost by six lengths in the Cluster Cup in Japan.

Following Sea, Lexitonian, Special Reserve and Dr. Schivel own speed as well, but in races with a fast pace, they are more likely to stalk.

Single Jackie’s Warrior in multi-race wagers and move on.

For an exacta wheel, think about C Z Rocket and Lexitonian underneath.

Master of the Seas lacks a Group 1 or Group 2 win in Europe this year.

Regardless, his form shows good efforts against a couple of familiar names overseas. In September, Master of the Seas ran third to Benbatl in the Joel Stakes (G2) at Newmarket. He lost by only 1 1/4 lengths, which is not a terrible margin against a good older horse. Master of the Seas also ran second by a nose to Poetic Flare in the Two Thousand Guineas (G1) in May on the same course.

Master of the Seas is 12-1 on the morning line and might remain forgotten by the public. Charles Appleby shippers often are underrated.

Mo Forza also deserves a spot in tickets. He overcame a slow pace in his last two starts to win the Del Mar Mile (G2) and City of Hope Stakes (G2), while beating a consistent runner in Smooth Like Strait each time. Mo Forza also won the same two graded stakes races last year, although for some reason he did not compete in the Breeders’ Cup afterwards.

Perhaps Got Stormy is usable as well. Although this 6-year-old mare’s form is inconsistent, she ran well when taking the Fourstardave Handicap (G1) in August. She also won the 2019 Matriarch Stakes (G1) on this course.

Letruska has run a great campaign and should earn the older dirt female Eclipse Award no matter what, but she could lose the Distaff at short odds.

Private Mission is likely to gun to the lead from the inside. If she can reach the front first, it might force Letruska’s rider Irad Ortiz Jr. to back off. From that point, Private Mission might control the race and post a mild upset.

Shedaresthedevil is a candidate to beat Letruska too. In fact, she already beat Letruska in the Azeri Stakes (G2) in March after outbreaking her at the start and controlling the pace.

In August, Shedaresthedevil won the Clement L. Hirsch Stakes (G1) by 3 1/4 lengths, giving the filly successful experience on this course.

If the pace does heat up, then the mare Royal Flag looks most likely to take advantage and pick them off in the stretch. In her three most recent starts, she won the Shuvee Stakes (G3) at Saratoga by three quarters of a length over Horologist, finished third by half a length in the Personal Ensign Stakes (G1) to Letruska and won the Beldame Stakes (G2) at Belmont by a dominating 4 1/4 lengths over Horologist again.

Teona brings great momentum from Europe to the Breeders’ Cup.

Two starts ago, Teona won the Sunningdale August Stakes by 3 3/4 lengths over the familiar Desert Encounter, who later finished second to Walton Street in the Canadian International (G1) at Woodbine in September. In Teona’s most recent start, she won the Prix Vermeille (G1) by 1 1/2 lengths over a big name in Snowfall, a three time Group 1-winning filly this year.

Teona is the top selection, although the defending champion Tarnawa poses a threat once again. In Tarnawa’s two most recent starts, she was second by three quarters of a length in the Irish Champion Stakes (G1) and Prix de l’Arc de Triomphe (G1). The latter is the most important race in Europe.

For a long shot, think about the German-based Sisfahan.

In early September, Sisfahan lost the Preis Von Baden (G1) in Germany by only a length to Torquator Tasso, the Prix de l’Arc de Triomphe champion.

There are two ways to approach the Classic. Multi-race wager players might want to include the biggest names in Knicks Go, Essential Quality, Hot Rod Charlie and Medina Spirit. All four colts are Grade 1 winners this year. For a long shot, Tripoli is another option.

From a win bet standpoint, it makes sense to narrow the picks to options that can give bettors the most for their money.

Knicks Go and Hot Rod Charlie both show at least one TimeformUS Speed Figure at 130 or above in this race, making them the two fastest horses on numbers. Value-wise, though, Hot Rod Charlie offers bettors more for their dollars as his projected odds are higher than Knicks Go and he owns slightly more versatility than his one-dimensional foe.

In addition, there is a chance Medina Spirit could post a mild surprise if he secures the lead. Bob Baffert does not back down from sending a good speed horse to the lead unless he trains other good speed horses in the same race. Also, bettors are likely to receive great odds on Medina Spirit as the probable fourth choice behind Knicks Go, Essential Quality and Hot Rod Charlie. If Knicks Go breaks slower than expected, watch out.

In other words, Hot Rod Charlie and Medina Spirit are the value options.

Essential Quality is bound to take advantage of a fast pace if one arises. But his final odds will be low because of his excellent win record.

Do not overlook Tripoli, as he was compromised by Azul Coast in the Awesome Again Stakes (G1) and figures to save ground with a rail trip. Maybe Tripoli is outclassed, but he loves 1 1/4 miles at Del Mar, as proven by his win in the Pacific Classic (G1) in August. He could hit the board.

Maybe another idea is to backwheel Tripoli underneath the big four names.