Analysis: Who's poised to upset in the Mucho Macho Man Stakes? 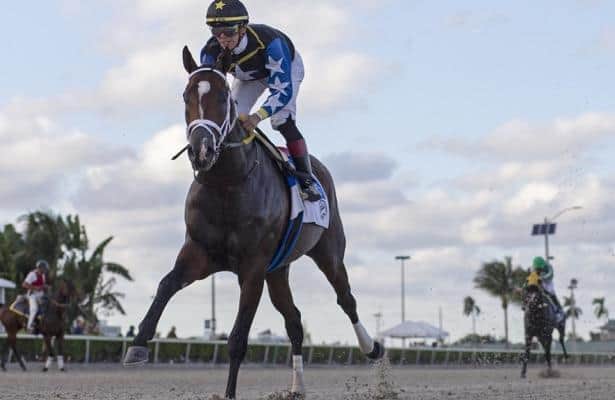 While the race won't offer 2020 Kentucky Derby points, the winner will probably use the race as a springboard to actual qualifiers, whether at Gulfstream or elsewhere. Therefore, the one-mile contest for 3-year-old horses remains an important one to watch.

This analysis will cover four horses that appear to have a chance at winning.

The first runner to discuss is As Seen On Tv, the winner of the Juvenile Sprint Stakes at Gulfstream Park West. To win, he had to press Smash Factor through moderate fractions before making his move on the turn.

As Seen On Tv ranged up alongside Smash Factor easily.

At the top of the stretch, As Seen On Tv and Smash Factor raced on even terms. Watching more closely, though, it is clear As Seen On Tv was only waiting for further cues from a confident Paco Lopez, while Smash Factor looked spent after receiving multiple whip strikes by Jesus Rios.

Lopez began to ask As Seen On Tv by waving the whip in midstretch, and As Seen On Tv responded, drawing clear by 1 ½ lengths. Also, 6 ½ lengths separated the runner-up Smash Factor and the third-place Poe.

Previously, As Seen On Tv competed at Monmouth by finishing runner-up to Meru in the Smoke Glacken Stakes and broke his maiden over the same course. All three of As Seen On Tv's TimeformUS Speed Figures broke 100, with his highest TimeformUS figure a 110 in the loss to Meru.

The concern is distance, as all three of As Seen On Tv's races came in sprints. But this colt is filled with distance blood. For instance, his sire Lookin at Lucky is known as a great route influence, while the dam Untamed Passion is a Pulpit mare out of Alydar. Untamed Passion is also a half-sister to Fantasticat, the 2004 Super Derby (G2) winner at nine furlongs.

If As Seen On Tv takes a step forward at one mile, he is the winner here.

The second option to discuss is Chance It, the winner of the Florida Sire In Reality Stakes.

He won at 1 1/16 miles, which answers the route question. But it is still important to observe the trip.

Chance It went wide on the first turn before flanking Smash Factor. On the far turn, Chance It began to draw clear from a tired Smash Factor earlier than As Seen On Tv did. Under moderate encouragement from Tyler Gaffalione, Chance It opened up by 7 ¼ lengths in the stretch.

One negative is that Chance It weaved in and out slightly late.

Chance It also earned a low 89 on TimeformUS for his route win, well below the top runners in this spot. His 99 and two 104s came in sprints.

Regardless, Chance It merits consideration. With a small break since his Sept. 28 In Reality win, it is possible he has matured and grown since then.

Next on the list is South Bend, the one-mile Street Sense Stakes winner at Churchill Downs. He won the race with the perfect ground-saving trip.

South Bend then disappointed at 5/2 in the Kentucky Jockey Club (G2), fading to sixth after pressing the longshot pacesetter New Eagle. But it is possible he did not handle the sloppy surface or two turns, or both.

Now he cuts back to a one-turn mile on fast dirt, and he did earn a respectable 102 on TimeformUS in his Street Sense win.

If South Bend can work out a good trip from inside again, he could rebound.

Finally, there is mystery turf horse in Sole Volante. This one owns two visually striking wins in turf routes at Gulfstream Park West and locally in the Nov. 30 Pulpit Stakes. From watching those two races, it is clear this closer owns a quick turn of foot. The latter win earned him a 105 on the TimeformUS scale, the second-highest figure in the field.

For what it is worth, Sole Volante's half-brother Explode ran well on dirt last year, winning the 1 ¼-mile Canadian Derby (G3) at Century Mile.

But Sole Volante's sire is Karakontie, while Explode's sire is Trappe Shot, a descendant of the dirt-oriented A.P. Indy. Karakontie is a turf sire.

Nevertheless, Sole Volante could still prove his versatility. Many horses with a turf pedigree ran contrary to their blood before.

As for the rest of the field, Smash Factor shows stamina issues in his running lines.

Ashaar's stamina is also questionable, as he faded in the Nashua Stakes (G3) when attempting to stretch out to one mile. Ashaar also sports a clear sprint pedigree on the bottom side.

Inter Miami only won a local maiden claiming race. Even though he drew clear by 8 ½ lengths, the TimeformUS figure came back too light at 91.

As Seen On Tv gets the nod in this analysis, with respect to Chance It and South Bend too. To a lesser extent, Sole Volante is also a contender based on his route experience and turn of foot. The dirt is a question mark though on the latter horse, while those first three names are solid contenders.