Analysis: A case for Owendale and Fearless in Stephen Foster 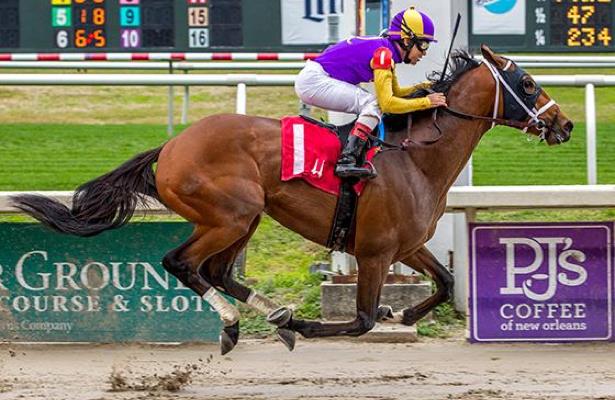 Four horses appear capable of winning the Grade 2, $500,000 Stephen Foster Stakes on Saturday at Churchill Downs. On the downside, the public is going to make those four entries the first four choices on the board in this eight-horse field.

Still, at least there is room for value beyond Tom’s d’Etat and By My Standards, the expected first and second choices.

With their best shots, Owendale or Fearless can win too.

Who is Owendale? Owendale is a consistent closer with upside. As a 3-year-old last year, he captured graded stakes races such as the Lexington Stakes (G3), Ohio Derby (G3) and Oklahoma Derby (G3). But he also finished third in the Preakness Stakes and second in the Clark Stakes (G1). Cross out the flop in the Breeders’ Cup Classic.

Once Owendale straightened out after the turn, he mowed down both Silver Dust and Everfast with a relentless outside rally to win.

The stretchout back to nine furlongs is not an issue. If anything, the slower pace of a longer race might help him sit closer early.

According to TimeformUS, trainer Brad Cox has won at 23 percent at Churchill Downs over the past year and 24 percent with Florent Geroux. This combination loves Churchill Downs and works well together.

Why did Cox choose this spot over the Metropolitan Mile (G1) at Belmont? The Stephen Foster ran as a Grade 1 race only a few years ago. Perhaps the connections still respect the race as a Grade 1.

At third choice or higher, Owendale is a solid third option to consider alongside Tom’s d’Etat and By My Standards, or even against them. He only needs a moderate to fast pace to close into and a clear path late.

As for Fearless, last February he won a Gulfstream optional claimer by 8 1/2 lengths to stir up hype. He then tried the New Orleans Classic (G2).

While Fearless disappointed with a sixth-place finish, he did experience traffic problems.

Watch Florent Geroux wrangle back Fearless around the first turn. It did not look too tight on video, but perhaps Fearless was not comfortable.

Fearless gradually moved up approaching the far turn. But he had no way to tip outside and get in the clear. Then in the stretch run, Tenfold and a fading Silver Dust continued to block Fearless on both sides. Late in the stretch, Tenfold came inside and forced Fearless to take up.

Fearless gets a pass for the stakes flop.

He is also forgiven for a runner-up finish in an Oaklawn optional claimer, when he lost to Dunph. According to the running line, Fearless fell 18 lengths back before closing the gap to 2 1/4 lengths. No matter what kind of talent the horse has, it is hard to make up 18 lengths on dirt.

In a May 30 local optional claimer, Fearless settled “only” seven lengths back this time and circled the field on the far turn, before swallowing both Top Seed and Gun It late. This time, Fearless won by 2 1/4 lengths while also overcoming a slow pace. Visually, it was impressive.

Like Owendale, Fearless might sit closer at the nine-furlong distance. The eight-horse field can help, as he is more likely to find room.

Fearless figures to go off as the third or fourth choice. As with Owendale, use Fearless either alongside the two favorites or against them.

Now to briefly discuss the favorites.

Tom’s d’Etat rides a three-race win streak into the Stephen Foster with wins in the Fayette Stakes (G2), Clark Stakes (G1) and Oaklawn Mile. In the Oaklawn Mile, he mowed down Improbable under a handride to win. Improbable went on to capture the Hollywood Gold Cup (G1).

He is also proven over slop and fast dirt, making rain a non-issue.

One concerning statistic is that trainer Al Stall Jr. is 0 for 24 over the past year with horses running back in 57 to 96 days (according to TimeformUS). With that said, good horses can overcome poor statistics.

Tom's d'Etat is a major contender, but an obvious one.

By My Standards rides his own three-race win streak. He won his return race in a Fair Grounds optional claimer before backing the effort up with wins in the New Orleans Classic (G2) and Oaklawn Handicap (G2).

His biggest weapon is tactical speed. He wants to track the leader in second and take over around the turn before the closers reach him.

On the negative side, By My Standards did need to work hard to take the Oaklawn Handicap, as Gabriel Saez used the stick multiple times. But it is also arguable that By My Standards defeated a good field with Warrior’s Charge, Mr Freeze and Tacitus behind him.

Unfortunately for those wanting one horse to count on, the Stephen Foster is competitive. Give the race a second glance over.