Analysis: This horse can beat favorite in San Diego Handicap 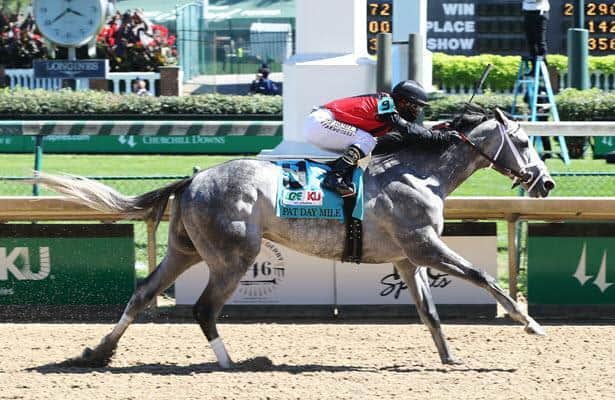 For bettors who enjoy playing against the heavy favorite, the Grade 2, $250,000 San Diego Handicap on Saturday at Del Mar is one to consider attacking.

Even though the improved Royal Ship deserves his role as the favorite after a game second in the Hollywood Gold Cup (G1) to Country Grammer and winning the Californian Stakes (G2) before that effort, there is an opening for him to lose this local prep race for the Pacific Classic (G1). The runner that can beat him Rushie, who is on the rail.

There are three reasons Rushie can defeat Royal Ship in the San Diego.

For one, the distance is shorter this time.

Instead of running 1 1/4 miles in the Hollywood Gold Cup (G1), Royal Ship and Rushie are now running 1 1/16 miles. The shorter distance favors the flashier Rushie, who seems out of his element competing at nine furlongs or longer.

Only three months ago in the Oaklawn Mile Stakes, Rushie barely lost by a nose to By My Standards. The Oaklawn Mile set him up perfectly for a campaigned centered around top one-mile races, yet the connections chose to experiment with distance in the Hollywood Gold Cup. With the longer dirt routes offering more money, it is easy to see why they wanted to take a shot and see if Rushie handles 1 ¼ miles.

Rushie came up empty in the stretch, which signals he does not want to run longer routes after all. Last year, Rushie also ran flat late in the nine-furlong Blue Grass Stakes (G2) and Santa Anita Derby (G1) too.

However, 1 1/16 is close enough to what Rushie wants. He is 1 for 1 at this distance with an allowance optional claiming win at Oaklawn last year.

In contrast, Royal Ship has run his best races in this country past one mile on dirt. As written above, he won the nine-furlong Californian and ran a close second in the 1 ¼-mile Hollywood Gold Cup. In both cases, Royal Ship and Country Grammer opened up with a notable margin on the third-place finisher, hinting that both of those races were fast ones.

The second reason to trust Rushie is the third start off the layoff angle.

Most returning horses hit their best stride in their second or third start off the layoff. Perhaps Rushie needed his first two races to shake off the rust. The reason is as simple as that. He could hit a peak speed figure this week and possibly win, if there is a slight regression in Royal Ship.

Royal Ship ran his third race of the season in the Californian. If there is another level of improvement in 5-year-old gelding, Mandella will save it for the Pacific Classic, as there is no reason to empty the ship yet for a Grade 2 race. This is Mandella's horse for the Breeders' Cup Classic.

As for the third reason to back Rushie, he is working fast with regular intervals.

Again, workout times are not the most important factor in the world. The majority of handicappers overrate their importance, as trainers prepare their horses differently and never work their horse as fast as he or she could go. Why would they empty the tank in the morning? Yet, Rushie’s fast works leading might signal a horse ready to run his “A” race, while Royal Ship seems like he is preparing for the Pacific Classic.

Now that Rushie cuts back in distance in his third start of the campaign with fast workouts in tow, there is almost no excuse for him not to fire his best shot. From the rail, he either needs to gun for the front under Umberto Rispoli or accept the pocket position close to the pacesetter. The latter scenario is fine as long as he handles dirt in his face.

Without a doubt, Royal Ship is the best horse on paper, especially in terms of TimeformUS Speed Figures. Multi-race wager bettors must include the favorite. Yet, Rushie is close enough in ability to find room for him on those tickets as well.

For those playing a win or place bet, Rushie is the best option at 3-1 or higher.