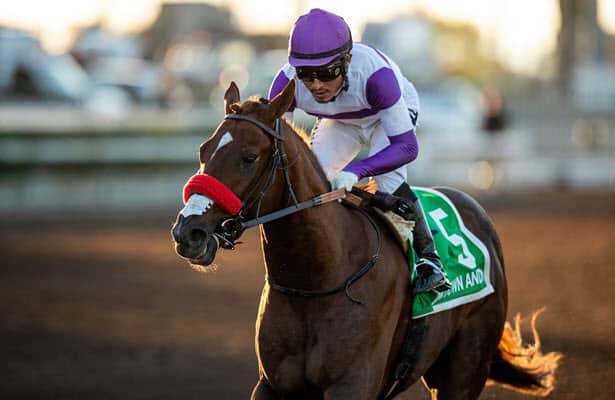 Even though Kentucky Derby prep races in California feature short fields, they typically result in a couple of top horses on the trail. One of them is shipping to Louisiana for the Grade 2, $400,000 Risen Star Stakes at Fair Grounds on Saturday, and this colt might offer value to bettors searching for other options besides the probable favorite Smile Happy.

The California shipper in question is Slow Down Andy, who won the Los Alamitos Futurity (G2) in December by one length over the Bob Baffert-trained Messier. A few weeks ago, Messier went on to dominate the field in the Robert B. Lewis Sakes (G2) at Santa Anita by an incredible 15 lengths.

Slow Down Andy sports two-time Kentucky Derby winning connections in trainer Doug O’Neill and owner Reddam Racing. It seems easy for the public to get behind this colt with familiar people behind him.

Yet a few factors will keep his price reasonable.

For one, many horse players are likely to single Smile Happy, the 3 1/4-length winner of the Kentucky Jockey Club (G2) last November at Churchill Downs.

Because of his strong performance last fall, Smile Happy ended up at 8-1 in Kentucky Derby Future Wager Pool 3, which closed on Sunday. The notable part is that he was the only singular option under 10-1. Slow Down Andy closed at 23-1 in the same pool with only mild interest in him.

The Pool 3 money shows there is a difference in how the public views Smile Happy and Slow Down Andy, even if they both won a Grade 2 race last time with approximately the same speed figure. On TimeformUS, Smile Happy earned a 108, while Slow Down Andy posted a 110 in his Los Alamitos win.

In other words, Smile Happy’s presence figures to help keep the odds on Slow Down Andy reasonable – or even in the value range depending on how excited the public gets to bet on Smile Happy. As stated above, there is no real difference between them in credentials or speed figures. But an undefeated horse who can close well tends to catch fire with the public.

The second factor to help Slow Down Andy’s price is his status as a Cal-bred. This is a California-bred son of Nyquist, the 2016 Kentucky Derby champion. Nyquist’s name at the top helps Slow Down Andy's pedigree credibility, but some bettors are probably not eager to spend money on a California-bred making his first start on a different circuit.

Yet the state of birth should not matter if the horse runs fast enough. Only eight years ago, California Chrome won the Kentucky Derby and Preakness Stakes as a Cal-bred.

The third factor to keep Slow Down Andy's price reasonable is his greenness. Slow Down Andy lost the Golden State Juvenile for Cal-breds by half a length to the average Finneus only two starts ago on the Breeders’ Cup undercard.

With his head cocked to the right and slight weaving in the stretch, Slow Down Andy ran like a horse who did not understand his job in the Golden State. Despite those same problems, Slow Down Andy still beat Messier one start later at Los Alamitos.

His lack of professionalism in the stretch might scare off bettors, but it might not stop him from winning anyway. Running on the outside might even help Slow Down Andy focus on the horses he needs to beat. Notice that he lost the Golden State Juvenile while running in between horses.

Slow Down Andy does own some tactical speed. Assuming Mario Gutierrez asks him out of the gate, he can clear enough horses to secure a stalking position behind Epicenter and any pressers. Since this is a nine-furlong race, the horses get more time before reaching the first turn.

Last year, Mandaloun won the Risen Star from Post 10 after stalking in third through the initial stages. A talented horse with speed or tactical speed can overcome a wide post, and Slow Down Andy looks like that kind of horse.

Deciding on Slow Down Andy as the top choice took a while as a talented runner such as Smile Happy is hard to ignore, and even Epicenter has a chance at stealing it. Perhaps there is still room for Smile Happy and/or Epicenter in multi-race wagers.

Ultimately, Slow Down Andy’s win over Messier looks impressive enough to make him the top selection. And the possibility of value exists, given the multiple factors above. While his problem of running green in the stretch is not ideal, maybe the ugly flaw will improve as a 3-year-old.

Slow Down Andy is the top blog choice and a fair win bet.