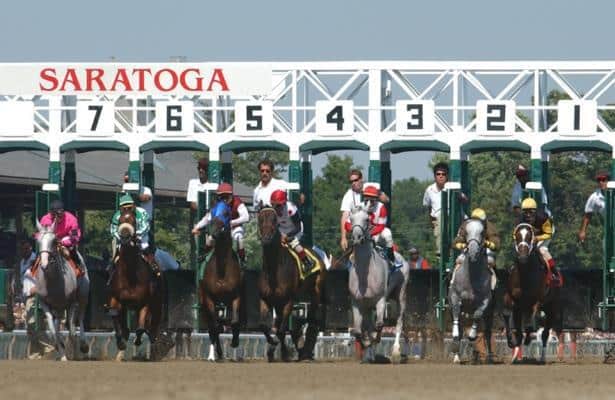 Life Is Good brings his blazing speed to the Grade 1, $1 million Whitney Stakes at Saratoga on Saturday, and there are only five other horses in the field against him. As explained before on here, small fields sometimes can result in more aggressive tactics from the other horses.

Given his speed, the most likely scenario is that Life Is Good would outsprint the field to the lead and open a slight cushion through moderate to fast fractions. Nevertheless, what are other possible pace scenarios besides Life Is Good controlling the pace alone?

One possible pace challenger is Hot Rod Charlie, who wears blinkers again for the first time since the Breeders’ Cup Classic last fall. The son of Oxbow also wore blinkers when he set blazing fractions in the 2021 Belmont Stakes before Essential Quality eventually passed him late.

Hot Rod Charlie could end up pressing Life Is Good. This is the second most likely pace scenario to happen, and one that is necessary if anything other than Life Is Good romping home to an easy win occurs.

According to TimeformUS Pace Projector, Hot Rod Charlie is placed almost right next to the Life Is Good on the projection, with a large gap to Olympiad in third. The projection takes into account blinkers.

With Hot Rod Charlie pressing, Olympiad might settle near them about two lengths away. Americanrevolution is expected to stalk the lead on the inside in fourth. The overmatched Zoomer could settle in fifth, while Happy Saver figures to trail the field or possibly settle in fifth while Zoomer is outrun.

As for the third possible pace scenario, Hot Rod Charlie under Flavien Prat could attempt surprise tactics from Post 2 and try to steal the lead from Life Is Good in the first quarter. It would throw Irad Ortiz Jr. on Life Is Good off guard and force him to decide whether letting Life Is Good loose is worth it with Hot Rod Charlie going for the lead at all costs.

Then again, Life Is Good has never once rated. If Hot Rod Charlie tries to gun for the lead, then it probably means the two hook up in a speed duel and set the race up for the horses behind them, such as Olympiad in third or even Life Is Good’s stablemates Americanrevolution and Happy Saver.

When Life Is Good set the pace in the Pegasus World Cup Invitational (G1) earlier this year, he posted TimeformUS Pace Figures of 152, 152, 148 and 137. In his most recent start in the John A. Nerud Stakes (G2), Life Is Good posted a 146, 140 and 135. There were fewer pace figures in the latter race because it was a sprint race.

Hot Rod Charlie does not always run pace figures in the 150s. But if Prat wants that kind of speed out of his mount, Hot Rod Charlie is capable. Another point to remember is that Prat rode Life Is Good in the John A. Nerud and knows he cannot let Life Is Good lead uncontested.

Those are three pace scenarios to consider in the Whitney Stakes. Although Life Is Good might simply sprint away alone as stated above, that pace scenario is not a lock given the blinkers added back on Hot Rod Charlie and how small fields result in more aggressive tactics from the other riders.

If Hot Rod Charlie uses his speed, the pace scenario could get interesting.