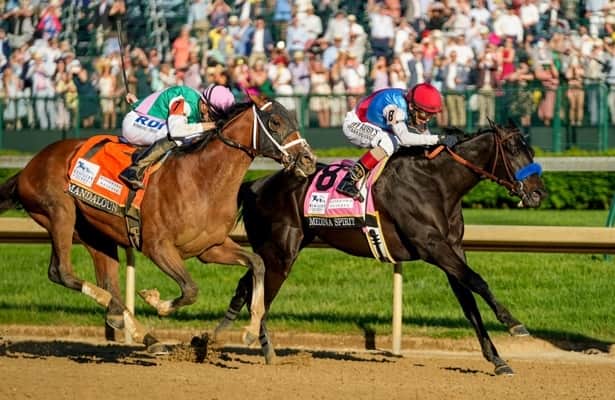 When the dust from the testing and legal battles settle, Mandaloun will likely end up as the 2021 Kentucky Derby champion. Even though the split sample for Medina Spirit tested positive again for betamethasone, the final outcome has not been decided. But a disqualification is expected.

In any case, the main point of this post is to explore the overall ability of Mandaloun, the Derby runner-up, and discuss his value from a betting perspective as he makes his next start on Sunday. The son of Into Mischief is scheduled to run in the listed Pegasus Stakes at Monmouth.

Mandaloun lies somewhere in the mix of top 3-year-olds, but even if he ends up declared as the Derby winner, it is tough to call Mandaloun the best 3-year-old horse in training – yet. A few notes about his races need further review before ranking him on top.

These notes also will help bettors consider whether they should spend loads of money on him in the Pegasus or when he returns to Grade 1 races.

For one, Mandaloun received a great trip in the Kentucky Derby and still failed.

In the replay below, watch as Mandaloun saves ground on both turns.

Then he tips out in the stretch run and gets a perfect shot at Medina Spirit.

In fairness, not every horse handles taking dirt on the inside. The position helps stalkers more on turf without the potential for kickback. Top horses such as California Chrome and Tiz the Law took the outside route in their dirt wins because of this reason.

If a horse does not mind eating dirt, though, then he gains a notable advantage from saving ground. The only tricky part is finding an opening.

As seen in the replay, Mandaloun easily tips out when Soup and Sandwich fades. One might expect Mandaloun to explode at this point after saving ground and storing up his run. Instead, Medina Spirit fends off Mandaloun while Hot Rod Charlie and Essential Quality come into the picture as well and put Mandaloun’s runner-up spot into jeopardy.

Then again, the accusation that Medina Spirit cheated is also an accepted one by most people now, even if betamethasone is not a performance enhancer. In a fair race, perhaps Mandaloun drives past Medina Spirit and holds off the other two runners late.

After running wide on both turns, Mandaloun comes up empty.

He finishes sixth by 11 3/4 lengths as the heavy favorite.

For most horses, fading after a wide trip in a two-turn route is understandable because of the ground loss. But bettors made Mandaloun the heavy 6-5 favorite in the Louisiana Derby. With those type of odds, near-perfection is expected as heavy favorites are supposed to overcome adversity and overpower the field. Regardless of the odds, the best horses are supposed to overcome a wide trip and still finish well.

To Mandaloun’s credit, he also ran wide on both turns of the Risen Star Stakes (G2) in February and still won by 1 1/4 lengths over Proxy, with Midnight Bourbon in third. That effort is more in line with a top 3 horse in this crop, and it makes the fade in the Louisiana Derby confusing.

Maybe handicappers can write off Mandaloun’s Louisiana Derby effort as an odd clunker for no real reason. Either he turned in a clunker, or trainer Brad Cox took it easy on him with the goal of peaking in the Kentucky Derby on May 1. Both are plausible explanations for the failure.

Whenever Mandaloun starts at 6-5 or less again, the Louisiana Derby flop is one bettors need to remember as he took a ton of money and burned it. In this week’s Pegasus against Grade 3-type horses, he is likely to start at even or less for an ungraded race where Cox probably does not want to empty Mandaloun’s tank.

Given Mandaloun's sixth in the Louisiana Derby, it is hard to call him better than Essential Quality or Hot Rod Charlie. If he is called the Kentucky Derby champion, that might help his standing. But for some reason Cox opted to skip both the Preakness and Belmont Stakes. At least Essential Quality and Hot Rod Charlie ran and competed well in two of the Triple Crown legs.

To end this post on positive notes, the fact that Essential Quality and Hot Rod Charlie went on to run great in the Belmont Stakes flatters Mandaloun. Also, the Risen Star win after running wide on both turns remains an impressive effort, even if it was months ago. Furthermore, it is hard to ignore a good horse with tactical speed in any dirt race.

Mandaloun eventually could develop into the top 3-year-old in the country. Right now, he only remains in the top mix with no clear leader.

Betting-wise, use caution when playing Mandaloun in the Pegasus at Monmouth as well. Only two years ago, Maximum Security, under the allegedly cheating trainer Jason Servis, lost this race to the ironically named King For a Day.

Mandaloun is not the best 3-year-old in the country, nor is he a lock to win the ungraded Pegasus. With that said, the potential is there to reach the top.