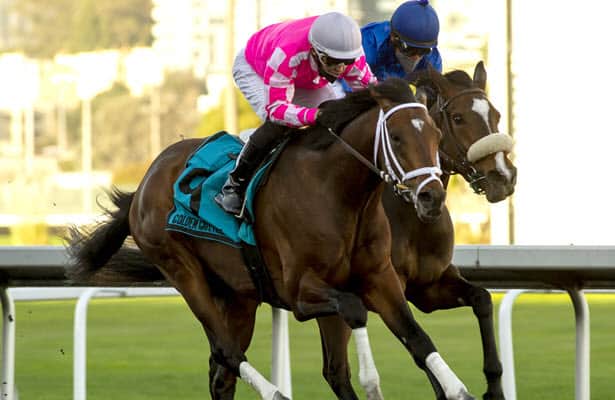 Off the probables list, there are three Preakness Stakes runners who are interesting from a win perspective right now. The second leg of the Triple Crown is scheduled for May 15 at Pimlico Race Course and possible entrants include Kentucky Derby winner Medina Spirit and his stablemate, Concert Tour.

First and second-place Wood Memorial Stakes (G2) runners Bourbonic and Dynamic One did not fare well in the Derby either, running 13th and 18th respectively. Their poor placings in the Run for the Roses make Crowded Trade a tough selection.

With those eliminations, there are three viable win options left.

Even though Medina Spirit won the Kentucky Derby and never ran out of the exacta in six starts for trainer Bob Baffert, he is not well respected by the betting public. Perhaps his sire Protonico repels handicappers away from him, either that or his low auction price.

Forget about Medina Spirit’s sire or humble background though. None of those two factors are important anymore, as this horse has shown his form up to 1 1/4 miles by now with two graded stakes wins, as well as three additional graded placings. If it rains, then revisit Medina Spirit's pedigree for signs of handling mud or slop.

While Medina Spirit runs better on the lead, he still remains likely to stay in the mix until the end even if he concedes the front. Without the lead, he still ran fast enough to beat Dream Shake for second in the San Felipe Stakes (G2) and Santa Anita Derby (G1). On the Kentucky Derby undercard, Dream Shake was a great second by a head to Jackie’s Warrior in the Pat Day Mile (G2) following an exciting stretch battle.

Medina Spirit also posted a 122 TimeformUS Speed Figure for his Kentucky Derby win, while opponents such as Concert Tour and Crowded Trade lack that figure.

All signs point towards Medina Spirit as a major contender once again. His overseas odds are the same as Concert Tour, making Medina Spirit the value.

This Tiznow colt never had a chance to run early in the Kentucky Derby. Jockey Mike Smith made an attempt to hustle Midnight Bourbon out of the gate. Once he did not break sharp, the horses to Midnight Bourbon’s outside inevitably went left and in front of his main path.

To Smith’s credit, he kept Midnight Bourbon outside and in the clear after the troublesome run to the first turn. Midnight Bourbon gave him some run by passing some tired horses for sixth, 8 1/4 lengths behind the resilient winner Medina Spirit.

Midnight Bourbon was consistent on the Fair Grounds path to the Kentucky Derby. He won the Lecomte Stakes (G3) in January, before finishing third in the Risen Star Stakes (G2) and second in the Louisiana Derby (G2) to Hot Rod Charlie. In that final prep race, Midnight Bourbon also ran a career high 114 TimeformUS Speed Figure.

Toss out Midnight Bourbon’s decreased 110 TimeformUS Speed Figure from the Kentucky Derby. As helpful as speed figures are when handicapping, they do not account for any trip failures. In a normal field, he is capable of securing an upfront position on or near the pace.

This remains a horse with upside. Consider Midnight Bourbon in the Preakness Stakes.

By sticking to the philosophy of eliminating Arkansas Derby and Wood Memorial horses, the list of possible contenders becomes slim.

Going down the list of probables, Rombauer is the third most interesting win option.  If the pace heats up, this closer could make up ground and threaten the leaders at double-digit odds. Right now, Rombauer is trading at 14-1 in overseas markets, which is decent. .

Rombauer did not keep up with Essential Quality and Highly Motivated in the Blue Grass Stakes (G2) stretch run, losing by 5 ¾ lengths. Those two runners had the race in their favor with a 48.21 half though and powered home quick. While Rombauer held a close position in third throughout the backside, he works better a closer into a fast pace.

Rombauer still only ran a 110 TimeformUS Speed Figure for winning the El Camino Real Derby and a 111 for finishing third in the Blue Grass Stakes, but those numbers can improve. In any case, a horse at double-digit odds in the Preakness is supposed to look a bit slow.

For what it is worth, Rombauer was also a closing fifth in the Breeders’ Cup Juvenile last November and second in the American Pharoah Stakes (G1) as well.

Rombauer’s Preakness win chances go up if Caddo River enters and joins Concert Tour and Medina Spirit up front. In that case, a pace collapse might happen and give this closer a shot. At a minimum, Rombauer deserves space in the bottom slots of exactas and trifectas.