These 3 Breeders' Cup probables might enjoy mud or slop 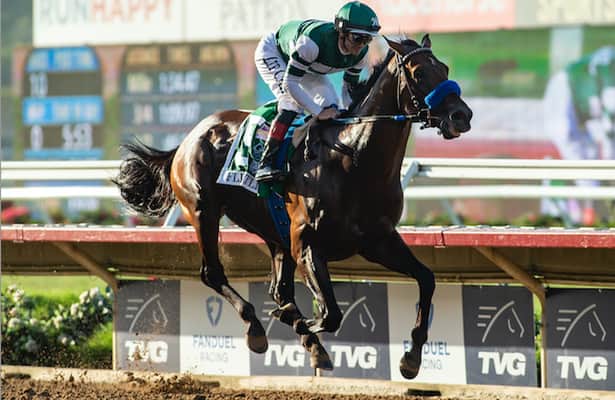 One of the more solid angles in mud or slop races is playing a horse with a connection to the great sire A.P. Indy. Some exceptions exist, but for the most part, the A.P. Indy influence helps when it rains.

See which horses appreciate a distance or surface change with Sire Moves, including turf horses moving to a wet track

Here are three likely starters for the Breeders’ Cup with A.P. Indy in their bloodlines and an overall evaluation of their chances to handle wet dirt.

With Tapit on top, the sire line for Flightline extends to the great A.P. Indy in the third generation. There is no sign of A.P. Indy on the bottom side.

But there are turf influences on Flightline’s bottom side, including Flightline’s dam Feathered and second dam Receipt, the daughter of Dynaformer. Feathered won the 2015 Edgewood Stakes (G3) on turf, and Receipt’s only win came when she broke her maiden on turf.

In many cases, horses with a turf pedigree tend to handle the slop.

Another factor to think about is Flightline’s speed, which should help keep mud out of his eyes as long as jockey Flavien Prat lets him roll in first, second or third early on. Most sloppy tracks favor speed for this reason, as the mud kickback tends to hamper the runs of many closers.

Nest already owns wins on wet dirt. When Nest blew out the field in the Ashland Stakes (G1) by 8 1/4 lengths, she did it on a wet-fast surface. Nest’s second in the Kentucky Oaks also came on wet-fast dirt.

Pedigree-wise, Nest is supposed to handle mud or slop. On the bottom side, her damsire is A.P. Indy. On top, Nest’s sire Curlin also helps as a mud or slop influence. In his own career, Curlin won the 2007 Breeders’ Cup Classic over an ugly slop surface at Monmouth Park. His active daughter Malathaat, who Nest might face in the Breeders’ Cup Distaff, won the 2020 Demoiselle Stakes (G2) on slop.

In addition, Nest owns tactical speed. She can contest the pace, as shown in the Coaching Club American Oaks (G1) at Saratoga when she won by an amazing 12 1/4 lengths, or she can stalk effectively as she did in the recent Alabama Stakes (G1) and finish well enough to win by 4 1/4 lengths.

Justique was discussed earlier in this blog in the post highlighting exciting 2-year-olds sired by Justify. This filly broke her maiden at first asking for the conservative trainer John Shirreffs in a 5 1/2-furlong sprint.

To make the Breeders’ Cup Juvenile Fillies, Justique needs to win or run well in the Chandelier Stakes (G1) at Santa Anita this weekend. If Justique wins, Shirreffs probably will take this filly to Keeneland as he tends to support the biggest races.

Justique’s damsire is Bernardini, the son of A.P. Indy. Out of all the A.P. Indy sires, Bernardini has been the most reliable one for producing runners who can handle mud or slop.

Justify also works as a mud or slop influence. After all, Justify captured the 2018 Kentucky Derby and Preakness Stakes over the slop.

In addition, there is turf in Justique’s blood. She is a half-sister to the successful turf runner Mo Town, who won the 2017 Hollywood Derby (G1) at Del Mar. On the top side, Justique is also a granddaughter of Scat Daddy, who sired many successful turf runners, including the $1.08 million earner Mean Mary.

If Justique could not handle mud or slop, it would come as a surprise with mud-sire Bernardini as the damsire and the connections to successful turf runners.

Before this post ends, remember this note. Pedigree matters when a horse tries something new, whether it is wet dirt or a change in surface or distance. But if the horse already owns experience at the race conditions, the form takes precedence.

If the horse runs contrary to pedigree, then trust the form. Otherwise, pedigree is a useful tool to help predict what races horses will want.