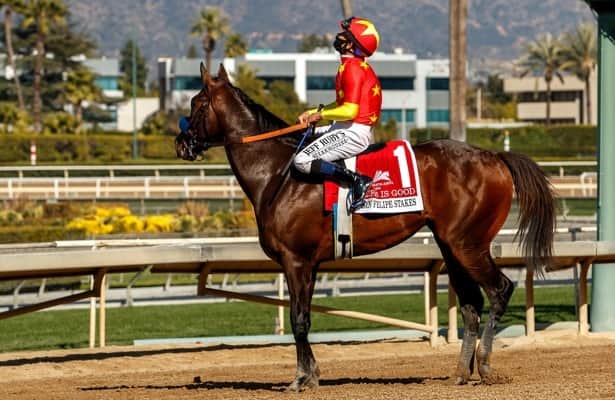 Following three points series races on the road to the 2021 Kentucky Derby, there has been plenty of movement on the leaderboard. One contender proved to be much the best on Saturday, another is good enough to qualify but still on the bubble, while the other two winners are not nominated for the Triple Crown.

Let's jump in and start analyzing the leaderboard by looking at who's in, out, and who's on the 2021 Kentucky Derby points bubble after the Gotham Stakes (G3), Tampa Bay Derby (G2) and San Felipe (G2).

When a top contender delivers an impressive win, the expectation that a 3-year-old can perform to that level without taking a step back isn't always rational. But when they do, the speculation that the 3-year-old is poised to become the next Kentucky Derby winner becomes even more appealing. After a win in the Sham Stakes (G2), Life is Good returned to Santa Anita Saturday with another remarkable performance. The win vaults the son of Into Mischief into a tie atop the leaderboard with 60 points.

Despite not racing on dirt or further than 7 furlongs before Saturday, he proved he's good enough to qualify for the Kentucky Derby. By winning the Tampa Bay Derby, Helium has enough points to make it into the Kentucky Derby field, but before we count him in, his connections will have to nominate him later this month. Trainer Mark Casse said Sunday that this is the plan.

After a three-month layoff, Pioneerof the Nile's son returned to Aqueduct the same way he left: a winner. But this time, a win in the Gotham Stakes has made Weyburn a potential Kentucky Derby starter. The only thing keeping his connections from getting their tickets punched is the late nomination fee.

His Kentucky Derby resume is impressive, but there's still one thing he hasn't been able to accomplish: beating his stablemate. Also trained by Bob Baffert, Medina Spirit finished right behind Life is Good for the second time on Saturday. But between those runner-up finishes in the Sham and San Felipe, Medina Spirit got his time to shine when he won the Robert B. Lewis (G3). Thirty-four points have been enough to qualify for the Kentucky Derby in many other years, but it took as many as 40 points in 2019. So Medina Spirit will remain in the bubble category for now.

He followed up his third-place finish in the Sam F. Davis (G3) with a second-place effort in the Tampa Bay Derby. Combined, they have put Hidden Stash in a comfortable position on the bubble since the son of Constitution may need only to finish in the top three of a points series one more time to qualify for the Kentucky Derby. The class in his next start on the Kentucky Derby trail will be tougher, but Hidden Stash might be ready for the challenge.

The son of More Than Ready completed his first graded stakes race in good order. Though he didn't win in his second career race, his runner-up finish in the Gotham gives Chad Brown all the points he needs at this point to still qualify for the Kentucky Derby without having to win next time out.

He continued to progress in the right direction with a third-place finish in the Tampa Bay Derby, but because he didn't finish better than fourth in the Smarty Jones, the son of Liam's Map can't afford to miss the top three again. Moonlite Strike's chances to qualify could be dwindling, but he's still in control of his own Kentucky Derby destiny next time out.

Though it was a good race for Chad Brown's other starter in the Gotham Stakes, a third-place finish for the son of Into Mischief might have been disappointing. One reason could be that after this weekend, the margin for error is getting thinner for the more seasoned starter. Highly Motivated still needs a significant number of points to qualify, and he will likely have to earn them all next out. The second option for disappointment might be his performance compared with his trainer's expectations in his first race at a distance greater than 6 1/2 furlongs.

Because his racing career started only last month, the Twirling Candy's son entered the San Felipe as a long shot to qualify for the Kentucky Derby. His pursuit of gaining points in a hurry got off to a good start, however, with a third-place finish behind Life is Good and Medina Spirit. He's now on the leaderboard and might worth considering as a top three finisher again in his next race.

The son of Empire Maker took a step back in the San Felipe by following up his runner-up finish in the Robert B. Lewis with a fourth-place effort on Saturday. Roman Centurian will have the opportunity to get back on track and qualify next time out if his connections continue to pursue the Kentucky Derby.

After finishing second in the San Vicente at Santa Anita, Bob Baffert elected to send the son of Violence to the East Coast for the Gotham. The effort to earn as many points as Life as Good or Medina was there for the taking, but Freedom Fighter came up short. He made it on the leaderboard by finishing fourth, but we'll have to wait and see if he gets sent back for another prep race or if he returns to sprints.

Todd Pletcher holds the record for the most wins in the Tampa Bay Derby, but Unbridled Honor didn't offer him much chance to extend it. By finishing fourth after breaking his maiden only in February, the son of Honor Code will have to show more promise next time out if his connections are still hoping he will qualify for the Kentucky Derby.

The Road to the Kentucky Derby resumes this weekend with the Rebel (G2) from Oaklawn Park. Click here to look at the remaining races on the points series schedule and the points awarded for each contest.