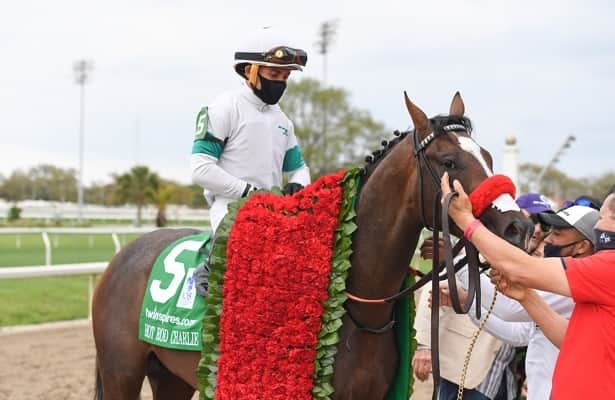 For the second consecutive week, a 3-year-old that shipped out of California took home the most points. The 2021 Kentucky Derby trail returned to the Fair Grounds for the Geade 2 Louisiana Derby, a race that holds a points payoff so significant that both the winner and runner-up scored enough to qualify for the main event on the first Saturday in May.

Let's jump in and analyze who's in, out and on the bubble by running down the changes prompted by Saturday's results.

The son of Oxbow has shipped east before, but this time he returned to his stall a winner and a Kentucky Derby qualifier. As a 2-year-old, he left California for Keeneland, where he was good enough to finish second in the Breeders' Cup Juvenile. After opening his sophomore campaign with a third-place finish in the Robert B. Lewis (G3), however, his chances for qualifying for the Kentucky Derby were not as strong as they appeared to be earlier in the season. But it takes only one good win at this stage, and Hot Rod Charlie delivered on Saturday. Trained by Doug O'Neill, he is the new Kentucky Derby points leader.

By finishing runner-up in the Louisiana Derby, Midnight Bourbon has earned more than enough points to qualify for the Kentucky Derby. Since finishing second in the Iroquois Stakes, the son of Tiznow managed not to miss the top three in his next four points races. His lone win in all five contests came in the Lecomte Stakes (G3), so the Kentucky Derby will be his next attempt at securing his second graded stakes win.

He got his ticket punched when he won the Risen Star (G2), but he took a step back as a Kentucky Derby contender over the weekend. Though he finished sixth in the Louisiana Derby, Mandaloun is still headed to Churchill Downs, where he will have the chance to prove that this performance was just a bad race. But don't expect the odds-makers to cut him any slack.

In the history of the points system era, this has been enough points to qualify each year except 2019. So even though the son of Tapit holds three consecutive top-four finishes in a Kentucky Derby points race, it is still uncertain at this point whether he has earned enough to make it in without considering the Lexington Stakes (G3). At this stage and looking ahead to the remaining points races and leaderboard, Proxy has an excellent chance to make it in.

Unlike Proxy, the son of Orb is on the back end of the bubble because the Louisiana Derby was only his second points race and he didn't finish better than third. Only a win or runner-up finish would guarantee him entry into the Kentucky Derby, so his connections will have to wait to see whether 25 points can keep him in the top 20.

In other news outside of the Louisiana Derby, Life Is Good no longer will compete in the Kentucky Derby. Following a workout at Santa Anita in preparation for his final prep, it was announced by WinStar Farm that the Into Mischief colt would be "out for a few months" and taken off the Kentucky Derby trail.

Next weekend the road to the Kentucky Derby resumes with two stops; the Jeff Ruby Stakes (G3) at Turfway Park and the Florida Derby (G1) at Gulfstream Park. The UAE Derby at Meydan also is a Derby prep. All three races will award points on the same scale as the Louisiana Derby, so expect new contenders to qualify for the Kentucky Derby. Click here to look at the remaining races on the points series schedule and the points awarded for each contest.

Division Rankings: Sprinters the focus on both coasts
The spotlight this weekend will shine brightest on...