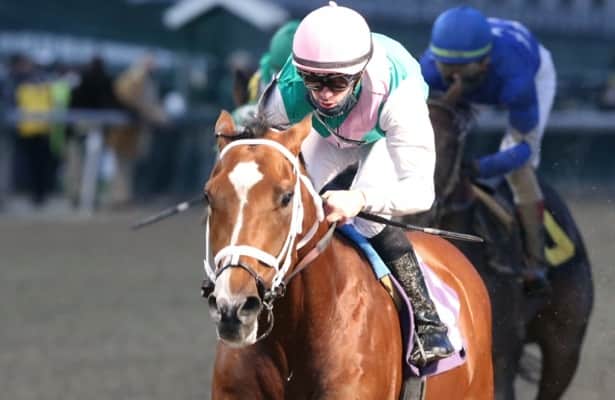 No win, or combination of wins, has earned a contender a ticket to the 2021 Kentucky Derby until now. The pursuit of qualifying began in September, but the points payout is never enough to put you over the top until we've reached the Risen Star (G2).

Let's jump in and start analyzing the leaderboard by looking at who's in, out, and on the 2021 Kentucky Derby points bubble. We begin by running down the changes prompted by Saturday's results.

After stalking the leaders from third, the son of Into Mischief delivered a decisive stretch run to win the Risen Star. He now sits atop the Kentucky Derby leaderboard. For the second consecutive year, his trainer, Brad Cox, is also on top of the leaderboard following this prep race. Last year, Cox's Mr. Monomoy followed up a third-place finish in the Lecomte Stakes with an impressive victory in the Risen Star.

In some years, this would be enough to qualify for the Kentucky Derby. But it took as many as 40 points in 2019, so the son Tiznow will remain on the bubble for now. Though he has fared better in his other Kentucky Derby prep races before his third-place finish in the Risen Star, the Steve Asmussen trainee has never finished outside the top three.

Back-to-back runner-up finishes in the Lecomte and Risen Star has the son of Tapit on the verge of qualifying for the Kentucky Derby. He will likely need to add one more top-three finish to do it, but this 3-year-old owned by Godolphin appears ready to follow up Saturday's effort with another reliable performance in his next Kentucky Derby points race.

Twirling Candy's son scored his first graded stakes win in his first start as a 3-year-old in Saturday's El Camino Real over Golden Gate's synthetic main track. After starting his career on the grass, the Kentucky Derby has now become a real possibility for Rombauer.

The son of 2013 Kentucky Derby winner Orb earned five points in his first graded stakes race. There's plenty of work left to do for O Besos to qualify, but his connections should have at least two more spins remaining if they intend to keep the Kentucky Derby in play.

Though fillies can race in Kentucky Derby points races and qualify for the big event, they still must be nominated for the Triple Crown. The daughter of Medaglia d'Oro is not, so while she will hold onto the points, she earned with a runner-up finish in the El Camino Real, a legitimate pursuit of qualifying for the Kentucky Derby may not occur.

The son of Govenor Charlie finished third in the El Camino Real Derby on Saturday. It was his first career start in a graded stakes race.

After breaking his maiden in January, the son of Anthony's Cross returned to Golden Gate Fields for his first graded stakes race. He earned a blip on the Kentucky Derby radar by finishing fourth in the El Camino Real.

The Road to the Kentucky Derby resumes this weekend with the $750,000 Southwest (G3) at Oaklawn. Click here to look at the remaining races on the points series schedule and the points awarded for each contest.

And finally, below is the complete updated leaderboard following the Risen Star and El Camino Real Derby.