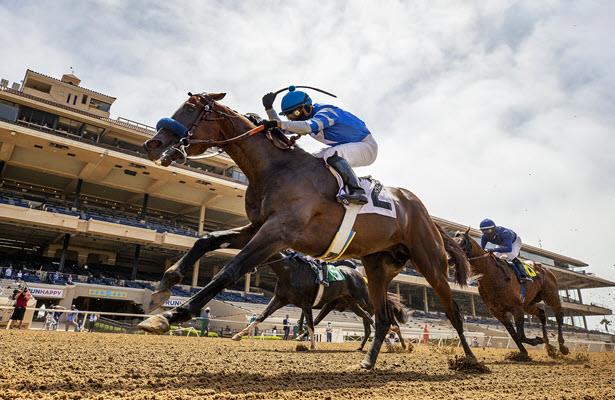 The final push for Kentucky Derby points began on Saturday with the Shared Belief, the first of four remaining qualification races scheduled in August.

The top four finishers in this contest were awarded points on a scale of 50-20-10-5, yet there wasn't a lot of movement on the leaderboard. At its conclusion, an upset winner has come off of the bubble and a top contender took a step back in his final Kentucky Derby prep. Here is an updated look at the points picture ahead of the Kentucky Derby on Sept. 5.

Heading into the San Felipe Stakes, Thousand Words was an early Kentucky Derby contender after he remained perfect in three career starts, including the Los Alamitos Futurity (G2) and the Robert B. Lewis (G3). Since finishing fourth in the San Felipe, and the postponement of the Kentucky Derby, the son of Pioneerof the Nile still needed more points to crack the top 20.

He re-emerged with a runner-up finish in the Los Alamitos Derby, which set him up with an easier way to qualify next time out. In Saturday's Shared Belief, third place was all he needed to make it off of the bubble, but the Bob Baffert trainee was ready for more. His return to winning form catapults him into the top 10 on the leaderboard.

We saw his best in the Santa Anita Derby, but the son of Honor Code didn’t have the same drive on Saturday in the Shared Belief. It was a hard-fought pursuit down the stretch, but Thousand Words was much the best. Despite the loss and the momentum he had leading into the Kentucky Derby, Honor A. P. still will have his chance to settle the score under the Twin Spires at Churchill Downs.

After the Shared Belief, 25 points still holds last place in the top 20 on the Kentucky Derby leaderboard. That position is held by Finnick the Fierce, who is scheduled to run in next Sunday's Ellis Park Derby. Behind him in 21st is Pneumatic, also with 25 points, but less stakes earnings than Finnick The Fierce.

In the Shared Belief, his graded stakes debut, the son of Cairo Prince performed well enough to be considered for Triple Crown races, but that is no longer an option worth considering. Kiss Today Goodbye has not been nominated for the Triple Crown, so don’t expect to see him in the Preakness Stakes after he just missed out on an opportunity for the Kentucky Derby.

The son of Curlin is Triple Crown nominated, so his connections would have been in the hunt had he been able to finish first or second in the Shared Belief. Despite the valiant effort, Cezanne was not able to cash in on a last-ditch effort to qualify for the Kentucky Derby.

There were two scratches in the Shared Belief, but both horses likely will race next weekend instead. Anneau d’Or, currently ranked in the top 20 with 32 points, is probable for the Ellis Park Derby. Uncle Chuck, still outside the top 20, will need to finish in the top four in the Travers Stakes before we begin considering his chances of winning the Kentucky Derby.