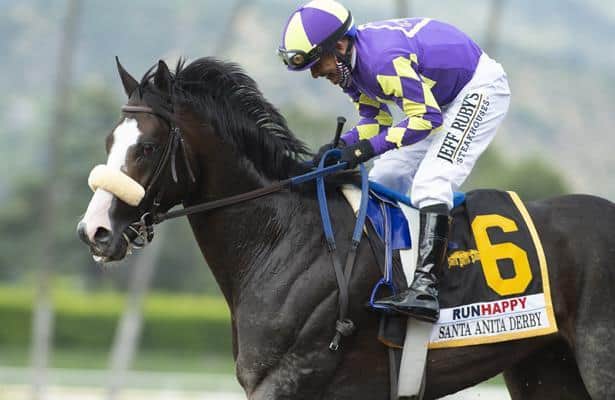 While the Santa Anita Derby (G1) was pushed back due to the COVID-19 pandemic, much of what happened Saturday was in sync with what we're accustomed to seeing from one of the top annual Kentucky Derby preps.

Not one, but at least two legitimate contenders emerged to run 1-2 with the top-four earning qualifying points toward the Sept. 5 race at Churchill Downs on the 100-40-20-10 scale.

Given that, here's an updated look at the points picture.

The son of Honor Code earned this victory with a commanding move around the final turn. It was there that he drew even with Authentic before he powered by his San Felipe (G2) foe and claimed revenge by getting the best of him this time. Honor A. P. is bound for the derby as a legitimate contender that looks like he will be ready for the added distance. Trainer John Shirreffs may look for one other spot to run in the meantime.

For the first time in his four-race career, the Into Mischief colt did not report to the winner’s circle after the race. For the first time, he also didn't get the chance to control the field as the pace setter. An outward break and slower-than-usual start may have cost him in the end. No longer unbeaten, Authentic still moved forward points-wise, and scenarios exist in which he's a strong Derby contender.

This total's enough to round out the top 20 for the moment, but that's not likely to be the case once entries are taken later this year. His return to California fell short of what we saw in the 2-year-old season when he finished a narrow second in the Breeders’ Cup Juvenile at Santa Anita Park along with the Los Alamitos Futurity (G2) after breaking his maiden over the Golden Gate Fields turf. The son of Medaglia d’Oro hasn’t finished better than fourth during his 3-year-old season as connections continue seeking improvement in the preps.

The son of Liam’s Map, third in the Santa Anita Derby, made a good showing behind the top two. But the Michael McCarthy trainee isn't Triple Crown-nominated, and the deadline passed to do so this week. Should he jump up and run bigger this summer, there's always a chance connections pay a six-figure supplementary fee. But Rushie looks more like a horse for major 3-year-old races outside of the classics.

Tough news arrived twice in the last 10 days for unbeaten colts trained by Bob Baffert. A condylar fracture exiting a recent work forced Nadal into an early retirement, while a less severe physical setback will have Charlatan sidelined long enough to miss the Belmont Stakes and Kentucky Derby. Nadal and Charlatan were last seen sweeping divisions of the Arkansas Derby (G1) to earn the bulk of their points.

Via Churchill Downs, here's a full look at the current leaderboard: