Sham Stakes: Baffert and O'Neill Face Off With Multiple Entries 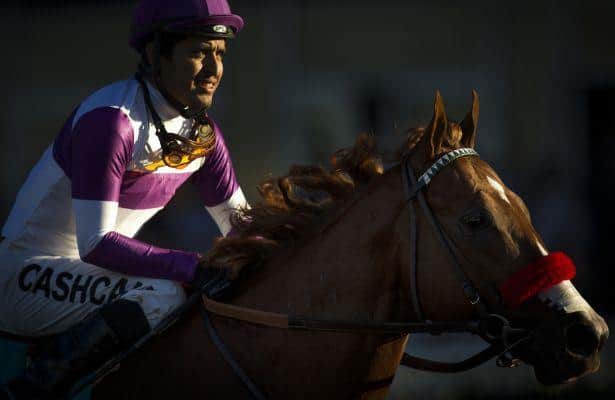 Bob Baffert and Doug O’Neill were responsible for over half of the starters in the 2015 Los Alamitos Futurity. After it was over, Baffert extended his record number of wins in this graded stakes race to eight. To make it even sweeter, Baffert knew at the top of the stretch that his only competition was himself. Mor Spirit charged ahead of Toews on Ice in the final furlong and the pair finished 1-2 en route to an impressive start on the 2016 Kentucky Derby trail.

Meanwhile, Frank Conversation and Sorryaboutnothing finished 5th and 7th in the seven horse field. So, Doug O’Neill would have to wait for another day before he could introduce another potential Kentucky Derby contender alongside his top candidate, and soon to be Eclipse Award winner, Nyquist.

This Saturday in the Sham Stakes, O’Neill will have his chance when he sends out three starters compared to only two for Baffert. Your eyes did not deceive you when you just read that last line. Four starters between the two trainers were not enough in the last Kentucky Derby prep out West, so we will see five in the Sham. And, since there are only 9 horses that will be entering the starting gate, they will once again be accountable for over half of the field.

Both of Baffert’s entries are similar, in that they began their racing careers in October at Santa Anita. They are also alike in that they both won over a distance of 1 mile last time out. The difference is that one proved that they were ready for the next step much sooner than the other.

Collected, by City Zip – Helena Bay (GB), kicked things off with a win in his maiden debut. From there the disparity widened when he finished runner-up in the Cecil B. DeMille Stakes – G3. Let’s Meet in Rio, by Flatter – Rio Carnival, has taken a more demanding path towards the Sham. After finishing 5th in his first start he would try again in November. Since the outcome was not much better at Del Mar, 6th, Los Alamitos would be the setting of his first career win in his third career start, a maiden special weight over 1 mile on the dirt.

Clearly, the advantage for the Sham Stakes lies with Collected. That advantage holds true over the entire field in fact as he will be listed as your morning line favorite with odds of 3-1. Let’s Meet in Rio is bunched up in the middle of the field on the morning line at 6-1.

At first look, your leading contenders for defeating the early favorite would be any of Doug O’Neill’s three starters. From that trio, it is the familiar silks and rider that stand out. Found Money, owned by Reddam Racing - ridden by Mario Gutierrez, returns to Santa Anita for the first time since beginning his racing career here with back to back victories.

As the racing distance lengthened the California bred by Square Eddie – Chanel My Belle, was not able to score after those two wins. But, you cannot discredit the effort and the types of races or class of horses he was racing against. However, the year is not over until your final race.

In his last start of the Juvenile season Found Money ended his layoff from the winners circle when he went on to win his third career race in the 1 mile King Glorious at Los Alamitos. In sum over his Juvenile season, Found Money started in six stakes races, two that were graded; Best Pal – G2, Delta Downs Jackpot – 3. He may have missed the top three in both of his previous graded stakes starts but I think we can put that aside when you consider his chances of doing so in the Sham. If you like him, you may find him at a nice price. He is currently listed at 6-1 on the morning line.

Sorryaboutnothing (15-1) returns for Doug O’Neill after a last place effort in the Los Al Futurity. Despite the quick turnaround being a factor there are a few other things about this 3-year-old that make it difficult for me to rank his chances any higher than the majority of the field. Semper Fortis (8-1) is the last of his trio and in many ways he reminds me of so many aspiring sophomores early in the Kentucky Derby prep season, including Let’s Meet in Rio; maiden racers that are entered because there is promise we haven’t seen yet or it is just a play to advantage a different horse in the field by the same trainer.

Technically, the FrontRunner Stakes at Santa Anita was round 1. There Doug O’Neill clearly won with Nyquist and Bob Baffert was beaten handedly when Mt. Veeder finished 6th in the eight horse field. Then, the roles were reversed in round 2 when both trainers doubled their entries for the Los Al. Now, round 3 gives us another exciting chance to see which trainer will head back to their corner with an early lead in California after the Sham Stakes.

While there is so much in play for these two heavyweights, we should keep in my mind that I have failed to mention any of the other four starters and their trainers. Was that a mistake, because the winner of this year’s Sham is amongst them? If so, and since I'm intrigued with the potential talent in this field, I’ll be sure to get my story straight before we see him next time out.