Sanford Stakes: The Juvenile Season is About to Heat Up 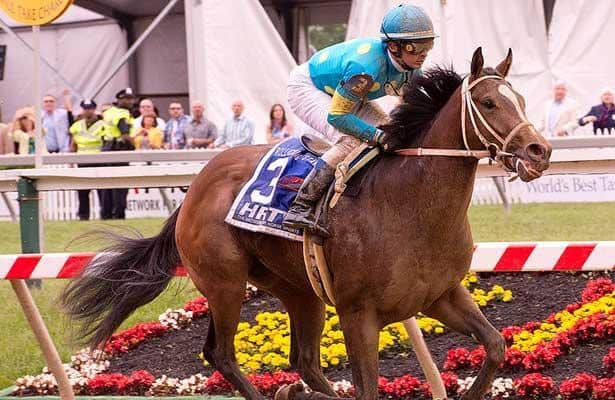 The horse racing industry is sizzling in July but the temperature always seems to rise once the gates open up at the Spa. Heating up as well is the Juvenile season.

Besides the G2 Best Pal Stakes at Del Mar, Saratoga features the most exciting Juvenile stakes races for males that contribute to the list of early Breeders’ Cup Juvenile contenders. Among the most recognized Juvenile stakes raced at the spa this summer are the G2 Saratoga Special (Aug 11), G2 With Anticipation (Aug 29) and the G1 Three Chimneys Hopeful.

The only one not mentioned is the one that kicks things off this weekend, the G2 Sanford Stakes. The journey towards the Breeders’ Cup Juvenile and Kentucky Derby has to begin somewhere and for 7 youthful dreamers, that battle begins on Sunday.

Leading the field as the morning line favorite is All in Blue, trained by Todd Pletcher and owned by Starlight Racing. The son of More than Ready and Cloud Rise enters the Sanford with only one win in one career start but it was probably how he won that got the odds makers attention. His debut on the 4th of July at Belmont Park ended quickly when All in Blue got on the lead at the 3/8 pole and drew away to win by 6 ¼ lengths. His impressive opening act over 5 furlongs was clocked in 57.51 on the dirt track listed as fast.

Todd Pletcher, being Todd Pletcher, has two horses scheduled to start in the Sanford. Although Yes Liz is listed at 6-1 on the morning line, the son of Yes It’s True is very similar to All in Blue. Or, so far at least. Before All in Blue broke his maiden in his first appearance, Yes Liz accomplished his on the previous day. Yes Liz dueled a bit more over 5 furlongs but was still game enough to pull away in the stretch and win by 3 ¾ lengths. The final time was 57.99 over a dirt track surface listed as Good.

One thing that defines Yes Liz as a very strong contender is by the jockey that will be in the saddle. John Velazquez, the rider with the most Sanford Stakes wins, will be going for his 7th and first since 2011. Todd Pletcher was the trainer in 5 of these 6 wins so as we’ve seen so often, the tag team will hook up on Sunday in attempt to do it again.

Speaking of Todd Pletcher, another interesting twist to the Sanford Stakes is who he will be facing. In July of 1999 TP scored his very first Sanford win with More Than Ready. In order to get his first he had to overcome the dominance of another Trainer he was also very familiar with, the 1998 Sanford winner D. Wayne Lukas.

That year D. Wayne Lukas scored his fifth career Sanford with Time Bandit and he was back the following year in search of his sixth. The reason Todd was so aware of who Lukas is because between 1991 through 1995 he was Lukas’ assistant trainer. Even though the student faced the teacher on many occasions prior to the '99 Sanford Stakes, Pletcher had to stop Lukas from winning his 6th in order to get his first.

So, why is this so interesting? Mainly it’s because Pletcher now finds himself in this same exact scenario but this time he is the teacher. Introducing Michael Dilger, former assistant trainer to Pletcher that decided it was time to go at it alone in January of this year. Prior, Dilger was most often found overseeing Pletcher’s barn and operations at Delaware Park. Because Dilger was also a rising star, you may have also spotted him at the track on the big racing days. But, now those big days are his alone. So, in order to win his first Sanford Stakes he has stop Pletcher from winning his 6th (sound familiar?).

Dilger’s Juvenile is Wired Bryan, a NY Bred colt by Stormy Atlantic and Red Melody that performed very well in his career debut. Based on that performance alone, I’m a little surprised with his morning line odds of 5-1. He was able to break clean, get on the lead early and break away to win in convincing fashion. The 7 ¼ length victory over 5 furlongs was timed in 56.64 over a Belmont Park track listed as fast. Wired Bryan should be returning ready to go after a one month layoff but this time he will be without Johnny V in the saddle. Up instead will be Shaun Bridgmohan. Regardless of the rider change I think Dilger has a very good chance of repeating Pletcher's feat in '99 because Wired Bryan could very easily win this one.

Finally, the horse that has raced the most and is on a roll is Debt Ceiling (above). Trained by John Robb and owned by Tim O’Donohue, the KY Bred by Discreet Cat - Top Marks enters a perfect 3 for 3. Debt Ceiling had a very early start to his racing career when he scored in his debut, a 4 ½ furlong at Laurel, on March 30. Following that performance was a nice 5f win in the Rollicking Stakes at Pimlico on Preakness Day. The win proved that he was ready for Graded Stakes class and on June 29 Debt Ceiling proved he was also ready to win one. His exciting triumph in the 6 furlong, G3 Bashford Manor Stakes at Churchill Downs was timed in 1:10.66 over a dirt course that was listed as sloppy (sealed). Hollywood Talent, who finished 2nd, will also be making the move from the Bashford to the Sanford.

The resume of Debt Ceiling is pretty solid but it still was not enough for him to get the nod as the morning line favorite. However, don’t be surprised at post time if Debt Ceiling goes off as the obvious first choice.

My pick: Isn’t Bryan just an awesome name, especially when someone is smart enough to spell it with Y? I agree, so Let’s go Wired Bryan!

Works: Gamine, Rock Your World among 21 notables on track
Working toward possible starts next month at Del M...

CCA Oaks runner-up Malathaat has Grade 1 target next
Malathaat garnered a career-best 96 Beyer for her...