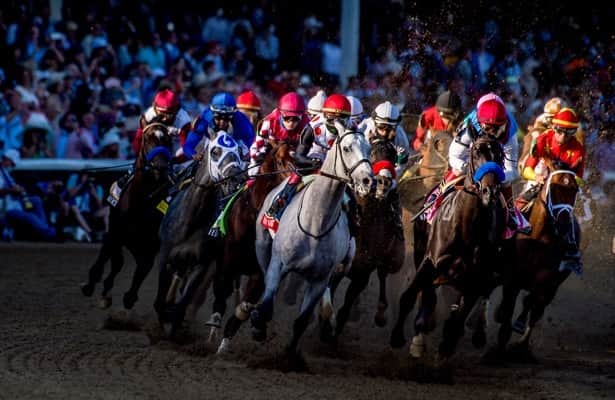 In 2002, War Emblem stormed out of the starting gate and took the Kentucky Derby field into the first turn.

From there, he controlled the pace under the direction of his Jockey, Victor Espinoza, before leading the field onto the backstretch at Churchill Downs. As it unfolded, he established a legitimate pace but possibly too modest for a horse attempting to win without ever giving up the lead. But that was the plan, and War Emblem was in control at the first turn.

[RELATED – What we learned: Medina Spirit excels on lead in Derby victory]

In many people's opinion, a runner's position leading into the first turn of the Kentucky Derby is more critical than in any other race of their careers, and an important indicator of their chances in the remainder of the race. Partly it is because it is the largest field of any major stakes race. And secondly, there is too much to overcome for runners that attempt to win from well off the pace. So, it is essential to be in position early on, and for some Kentucky Derby starters, their only chance relies on them being in front at this essential point in the race.

Bob Baffert had only one strategy to pull off the upset in the 2002 Kentucky Derby with this unknown colt, and it was executed to perfection. The wire-to-wire win was quite surprising and much different than Baffert's first two Kentucky Derby wins. In 1997, Silver Charm was positioned comfortably in fifth as the field made its way into the first turn. The following year, Real Quiet hugged the rail and sat as far back as eighth place as he rounded the first turn and began to make his way to the front. While both jockeys, Gary Stevens and Kent Desormeaux, did their job and avoided a great deal of traffic, there were still horses running directly in front of them that they had to pass.

After 2002, Baffert won the Kentucky Derby four more times, and each time, none of his horses were caught racing worse than third by the time they entered the first turn. In 2015, American Pharoah was running in third at this juncture, but the Kentucky Derby winner was placed three wide and didn't have a single horse directly in front of him. In 2018, Justify was set just outside Promises Fulfilled in second and had a clear path in front of him as well. So when Mike Smith took the lead on the backstretch, it was a routine pass without any horses to maneuver around.

Both races and performances by the jockeys that Baffert assigned played out exceptionally well and highly complementary to the idea that the Kentucky Derby is won between the starting gate and the first turn.

Last year, it appeared that Baffert would fall victim to an unforced error when Authentic bobbled slightly as he exited the starting gate. Though it was an awkward start from the far outside, John Velazquez quickly proved why he is among the best in the business. Velazquez needed to stick to the plan and steer Authentic to the front of the pack no matter how difficult it was, because tucking him in toward the middle of the pack might not have given him the best chance to win. So Velazquez forged ahead and took over before any other horse reached the first turn. Once he took the lead, his horse never gave way, and just like War Emblem, Authentic completed the wire-to-wire victory.

Fast forward to Saturday, and the 2021 Kentucky Derby was almost a replay of what we saw in 2002. Like War Emblem, Medina Spirit broke cleanly from the gate and was hurried to the front before Velazquez sat him down on the lead and controlled the pace as he ushered the field onto the backstretch. Though his fractions were slightly faster than War Emblem's and marginally slower than Authentic's, the play to win from out front was already in motion, so all Velazquez and Medina Spirit had to do was hang on.

As they turned for home, the picture became crystal clear: Baffert was about to break the Kentucky Derby wins records for a trainer by leading start to finish once again.

The strategy and front-running style is not unique to Baffert, as many other Kentucky Derby winners in recent years had captured the roses by being in or near the lead by the time they reached the first turn. But what might be more surprising is that the other riders didn't press to challenge a Hall of Fame rider like Johnny V, who had just wired the field in this race last year. Or maybe the damage already was done because there could be no stopping Medina Spirit and Velazquez after they grabbed the lead despite any efforts to prevent it from happening.

Regardless, it was a flawless execution of a game plan that has paid dividends to so many, including Baffert, who has now won seven Kentucky Derbies and three of the last four. A runner's position through the first turn is key in the Kentucky Derby, and this year's edition was another textbook example of how winners play their hand on the first Saturday in May.