Kentucky Derby 2022: Who's in, out and on the points bubble? 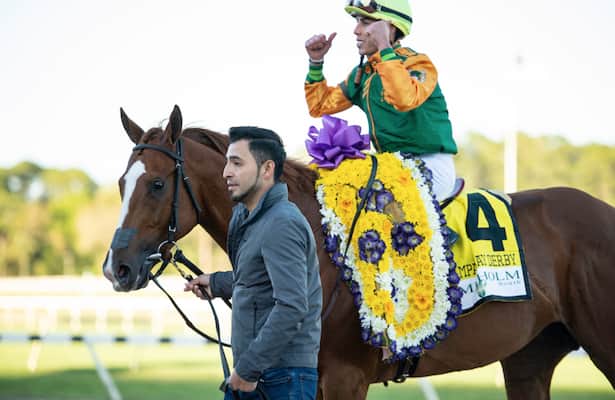 The road to the 2022 Kentucky Derby resumed over the weekend with the Tampa Bay Derby (G2). The points breakdown was enough to guarantee one starter a spot in the Kentucky Derby, but the rest of the field has more points left to score before they can have their ticket punched.

Let's jump in and analyze who's in, out, and on the bubble by running down the changes prompted by Saturday's results.

The son of Giant's Causeway returned to Tampa Bay Downs for another impressive win. After winning the Sam F. Davis (G3), his score in the Tampa Bay Derby makes him the new Kentucky Derby points leader.

Trained by Brian Lynch and ridden by Irad Ortiz Jr., Classic Causeway looks to become the first Kentucky Derby winner since Super Saver in 2010 to use the Tampa Bay Derby and second since Street Sense in 2007. The connections for both champions opted for a different race in their final start before entering the Kentucky Derby, but it is still too early to tell if  Classic Causeway will follow either of them because it has not been announced where he will race next. In the meantime, it was another outstanding performance on Saturday for this Kentucky Derby contender.

A surprising finish vaults the son of Declaration of War onto the Kentucky Derby radar. By finishing fourth in the Withers (G3), Grantham was on the leaderboard before this weekend but not deserving of much attention. That might have changed significantly with his runner-up finish in the Tampa Bay Derby since this year's total points to qualify may be lower than average. So with the big score on Saturday, Grantham is on the bubble and eligible to lock in a spot next time out with another top four finish.

His effort in the Tampa Bay Derby was a step below his performance in the Sam F. Davis, but the son of Midshipman is still scoring and heading in the right direction. This third-place finish makes this is his second consecutive top three finish in a Kentucky Derby points race, but the New York-bred colt will need one more before he can make it into the top 20. Until then, it's been a solid 3-year-old campaign for Shipsational, and his connections as they look forward to learning more about this Kentucky Derby qualification chances after his next race.

After closing his juvenile season with a win in the Iroquois (G3), Major General opened flat in his 3-year-old debut. Stumbling out of the gate and layoffs are hard to overcome, but there's still one more chance to qualify for Major General and his connections, trainer Todd Pletcher and owners Win Star Farm.

The son of Ghostzapper improved his Kentucky Derby qualification potential in his return to Tampa Bay Downs, but there is still a long way to go. Golden Glider did not score any points by finishing fifth in the Sam F. Davis, but he did when he surged to the wire from as far back as seventh to secure the back end of the Kentucky Derby points payout in the Tampa Bay Derby. Certainly a nice race, but unlikely to qualify for the Kentucky Derby as his next attempt will be against a tougher class.

Another son of Giant's Causeway on this year's road to the Kentucky Derby has not been so impressive. His third-place finish in the Breeder's Cup Juvenile raised high hopes for Giant Game, but he has failed to score again in his second two attempts. A pair of eighth-place finishes in the Holy Bull (G3) and Tampa Bay Derby don't look good at the moment, but if connections try again, his chances of qualifying are still open.

The road to the Kentucky Derby will be on a short break until racing resumes with the UAE Derby (G2) and Louisiana Derby (G2) on March 27. The scoring will increase with these races to a scale of 100-40-20-10.

Click here to see the remaining races on the points series schedule and the points awarded for each contest. And finally, below is the updated leaderboard.