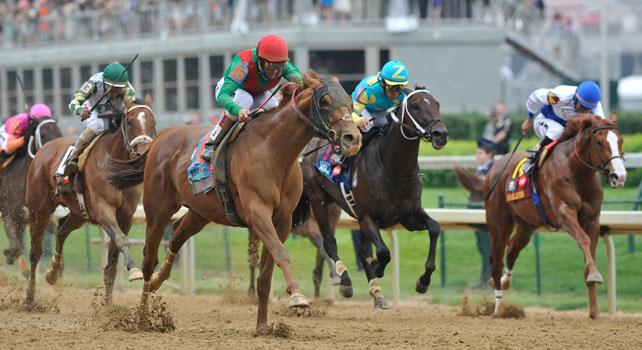 Photo: Eclipse Sportswire
Over the years and through the decades of Kentucky Derby history some trends have been talked about much more than others. Some have held their ground but others have also ended. Some fans disregard them while others pay close attention.  Regardless, these fads can be fun to watch and always add excitement to the Kentucky Derby.
In recent years we have seen some long standing trends finally come to end after being tested time and time again. The first that comes to mind was the curse of Needles: The 5 / 6 Week Layoff. In 1956 Needles won the Kentucky Derby after a 6 week layoff. It wasn’t until 50 years later that Barbaro became the first 3-yr-old to score after resting for five weeks.
This of course only changed the name of the trend as the curse of Needles then became: The 6 week layoff. But, once again it wouldn’t be long before another champion raced onto the scene and ended it. What made this winner even more impressive is that he stopped not one but two trends on the very same day. In 2011, Animal Kingdom closed the door on the six-week layoff and also became the first ever horse to win the Kentucky Derby after never racing on dirt.
Others that have recently ended include: The 20 Hole. In 2008, Big Brown became the first ever to win from Post Position 20. How about the Improbable Double. In 2007 Street Sense became the first to win the Kentucky Derby after scoring the Breeders’ Cup Juvenile as a 2-yr-old.
Or, what about this one: The Favorite Never Wins. This one crumbled in 2000 when Fusaichi Pegasus became the first post time favorite to win the Kentucky Derby since Spectacular Bid in 1979. But, that was just a fad because even though it was rare it became normal by 2008. By then it happened 3 more times over the next eight years – Smarty Jones’ 05, Street Sense ’07, Big Brown ’08.
Does anyone remember that: Geldings Can’t Win. In 2003, Funny Cide became the first Gelding to win the Kentucky Derby since Clyde Van Dusen in 1929. The odd achievement would surface again with Mine That Bird in 2009.
Finally, it was just last year when we witnessed I’ll Have Another put two trends to bed. He became the first Santa Anita Derby winner to claim the roses since Sunday Silence in 1989 and the first to ever score from the most dreadful position in the starting gate; post 19.
So, that was a look at some the trends that officially dissolved as of late. If the examples prove anything its that it may be wise to be careful when taking these so called trends into account before making your picks. Recent history shows that even though a trend can be supported, it’s only a matter of time before another horse will end it. If your gut tells to bet that horse, I suggest that you go for it. I stand by that because ending a trend has now become a trend itself.
This brings me to a trend that has only recently begun to develop. Because it doesn’t have a lot legs I can understand if you dismiss it immediately. But, 6 years in a row is still worth mentioning so here goes. Since 2006, when Barbaro won the G3 Tropical Park Derby on New Years Day, no Kentucky Derby winner has raced in January. Big Brown, Mine that Bird and I’ll Have Another all waited until February before they began their 3-yr-old racing season while Street Sense, Super Saver and Animal Kingdom waited until March.
Can you conclude whether or not the fad of not racing in January will stay alive in 2013? To help you out here’s a look at our Kentucky Derby 2013 Contenders and where they stand alongside of this trend. We first begin with the crop of horses that will be racing to end the trend.
The two that jump out at you right away are Shanghai Bobby and Itsmyluckyday. Others that may be gaining steam are Verrazano, Oxbow or possibly Dynamic Sky and Goldencents.
My analysis on this trend is that it's not worth much and it's something that I will not consider. I think that a few of the horses that have raced in January are on the right path. If they continue to ride smoothly then they can also be considered legitimate contenders on Derby day.
However, I can also see why this fad may continue. The reason behind that is because the list of horses that raced on the first Saturday in February or have yet to race this year look just as nice if not better than your January starters.
A big thing that helps this trend is how reluctant top trainers have become with racing their horses too much. The result of that strategy is that most derby contenders won't begin their 3-yr-old campaign this early. The strategy seems to be working but I can't be certain that will continue for too long. Another reason I find this trend as a temporary fad is because not long ago racing in January was a recipe for success. Between 1998 and 2004 each of the seven Kentucky Derby winners raced in the first and coldest month of the year.
In conclusion, while I think this trend is interesting it doesn't play much of a role with me. I won’t predict it this year until we get further down the road but I’m pretty confident this trend will get tossed out over the course of the next two Kentucky Derby seasons. It’s curious for now but it will soon be an afterthought once a January starter goes on to win the roses and becomes the first since Barbaro.
Violence Revolutionary Flashback Itsmyluckyday Dynamic Sky Shanghai Bobby Will Take Charge Barbaro Oxbow Uncaptured Normandy Invasion Santa Anita Park Churchill Downs Kentucky Derby Santa Anita Derby Santa Anita Derby (2013) Kentucky Derby (2013)