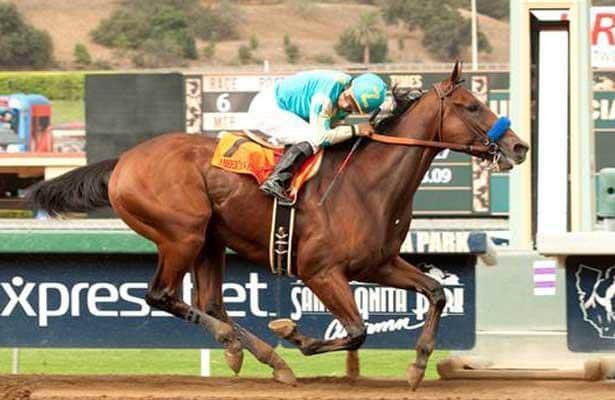 Less than fourteen days until the 2014 Breeders’ Cup at Santa Anita Park in Arcadia, California. With an event so large comes a lot of movement, logistics, training, handicapping, planning, media coverage and ongoing preparations until the gates open for day one on October 31st.

For everything that is trending however, something else is sometimes descending. So, let’s play a little give and take as it relates to what’s hot in the 2014 Breeders’ Cup Juvenile division.

8 years later the series has expanded to 72 races and 13 countries. Now that's a global sporting event.

Descending: Europeans chances in the BC Juvenile

Though it has happened, the stats prove whose boss in this division. A European horse has won the Breeders’ Cup Juvenile in four of the last 30 years. Among them, only Vale of York (IRE) was bred outside of the U.S. Arazi, Johannesburg and Wilko were all bred in Kentucky before moving across the Atlantic to begin their racing careers.

There are certainly other top trainers around the world.  As for the Breeders’ Cup Juvenile only three have won this division more than once. When Shanghai Bobby won at Santa Anita in 2012 it became Todd Pletcher’s second along with Unlce Mo 2010. Last year Bob Baffert did him one better when New Year’s Day scored the upset, joining Midshipman 2008 and Vindication 2002.

They still have work to do if they plan on catching D. Wayne Lukas, the all-time Breeders’ Cup Juvenile leading trainer has won with Capote ’86, Success Express ’87, Is It True ’88, Timber Country ’94, and Boston Harbor ’96.

Descending: Odds of Another Repeat in 2014

It will happen again, but this may not be the year that another trainer wins his second Juvenile.

Todd Pletcher is red hot after scoring a win in the final two of four Breeders’ Cup Challenge series races for this division. First, was Carpe Diem who blitzed the field by 6 lengths on the dirt at Keeneland in the G1 Breeders’ Futurity. The WinStar Farm colt by Giant’s Causeway has 2 wins in as many starts and gives Pletcher a great shot at winning his third.

Just as impressive in the G1 Champagne Stakes is Daredevil. By another Pletcher horse, More Than Ready, Daredevil could easily be the one that completes the trifecta for Todd.

As for Baffert, he has the FrontRunner Stakes winner American Pharoah as well as Punctuate, a probable long shot should he be entered. Then there is D. Wayne Lukas and Mr. Z, a fine young talent that has done everything but win a graded stakes race; runner-up in three graded stakes races.

Steve Asmussen has yet to win the Juvenile so if his talented colt Lucky Player wins he will join this conversation next year. For anyone that is a fan of I Spent It or Upstart, Anthony Dutrow and Richard Violette are in the same category. Of the remaining contenders with a trainer that has at least one win there is only one that stands out to me as a probable winner – International Star, Michael Maker.

A win in the G3 Grey Stakes at Woodbine last time out was his breakthrough performance. Prior, the son of 2000 Kentucky Derby winner Fusaichi Pegasus, came up just short; Runner-up in the Rockville Centre Stakes at Belmont and the G2 With Anticipation Stakes.

Still unsure if he’ll be entered but if so Mike Maker will look for him to join Hansen, 2011 winner at Churchill Downs.

Who doesn’t like handicapping without looking at these figures? Regardless of which you prefer, or how much weight they account for with your bets, they are worth consideration or at least entertaining.

It’s not to say that the Brisnet Speed Ratings were by any means too low but for a race of this caliber, and class, a rating in the triple digits tends to be more common. In the last two Breeders’ Cup Juvenile races, Shanghai Bobby and New Year’s Day landed on 92.

New Year’s Day won in 1:43.52 which was a full second faster than Shanghai Bobby, 1:44.58. Still, those times were below average when compared to other years when the race was run on dirt. Furthermore, these times were also somewhat puzzling because the track condition both times at Santa Anita were listed as fast.

This point isn’t to compare one speed figure versus the other but to simply state the obvious. The past two years have been slower than expected. Will the Juveniles pick up the pace in 2014?

We end without much competition versus this trend. Since the inaugural Breeders' Cup in 1984 the Eclipse Award for Two-Year Old Male has almost always gone to a Breeders' Cup Juvenile starter.

Last year was the fourth time it did not, but who wants to argue against a horse named Shared Belief. Prior, Declan's Moon took the honors in part because Wilko's only win in the U.S. was the Breeders' Cup Juvenile.

Before that, Maria's Mon got the nod over the lightly raced Unbridled's Song in 1995. Similar to last year, Forty Niner won over Success Express in 1987 because the Breeders' Cup Juvenile win was all that that he had versus a horse with more graded stakes starts and wins.

The years where a Breeders' Cup participant won the Eclipse without winning the Juvenile, include Lookin' At Lucky 2009, Dehere 1993, and Easy Goer 1988.