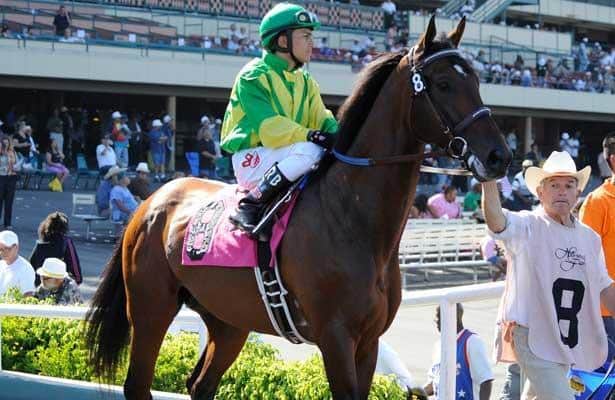 We have a big weekend coming up at Arlington Park, but I would first like to thank those who have been awaiting a new HHH article for putting up with my 31-60 day layoff.  Perhaps I will have a good record after the hiatus, much like Dark Cove's trainer Mike Maker (26%), ideally with a better ROI.

As for Dark Cove (pictured above), he is on top of his game, coming into the race off of two wins, his first two tries at 12 furlongs on turf.  I will leave it to others to extoll his virtues, because there is one statistic that makes it absolutely necessary to poke holes in Dark Cove's form: the 1-1 morning line. Dark Cove is simply unbettable. The following gives me hope going against him, but it is admittedly weak: he is drawn inside, whereas he has been outside in his last four; he is carrying seven more pounds than the field; and he is a horse - he may just have an off day.

While I grasped for straws to find fault with the favorite, I will now overlook numerous faults and tell you that in all likelihood I will bet Ioya Bigtime a bit.  Yes, his form has been bad lately and he lost his last two races to Dark Cove.  He looked uncomfortable in the Elkhorn, carrying his head very low and fading badly to arguably his worst finish.  He never made it near the front in the Louisville Handicap and was likely done in quite quickly there.  He also has a mediocre record at Arlington.  However: he can control the race, he did win last year (for whatever that's worth), and he is the only other entrant who has won at the distance.  Unfortunately, we will not see the 41-1 odds available last year, but he will hopefully drift upwards from 4-1, as The Pizza Man and Suntracer should take some money.  They can show me.

As for Doctor Trotter, he looks overmatched, but Live In Joy is going to be my choice here.  He is bred for distance despite being untested and has run respectably in his last five.  He comes from a capable barn that can pick spots and that brings in well-priced winners on turf and seems to like the Arlington turf.  If he stays in double digits, I will be happy.

In the Modesty, La Tia is a nice Illinois-bred: toss the Raven Run on synthetics and she is on a 6-race streak with an affinity for Arlington Park.  I would leave her off of my tickets at my own peril.  Artemus Kitten offers nice value for Maker/Leparoux, but I wonder if she wants the extra distance.  Strathnaver certainly will not mind it, but she is a bit low at 3-1.  Perhaps her odds will go up based on her poor finish last out over the soft Belmont turf.  Colonial Flag should not have a problem with the distance, and she is a deserving favorite coming off six consecutive graded stakes.  At the moment I like them in the order they are listed here, but as always, things change.  With these three horses quite close in odds, I will really need to watch the toteboard before I bet.  However, I will likely use all four named above in the pick-4.

In the American Derby, Admiral Kitten may finally get the extra distance he seems to have been wanting for some time now.  General Election - who has put together the best career of any of these thus far - should not mind the stretch-out either.  Both horses like to run very late, but while the former has started 4 times on turf, General Election makes only his second turf start.  However, he was very good in his turf debut, made right here at Arlington last time out.  Both of these horses will take plenty of action, though, so I may look to Dorsett for some value.  He has taken to the Arlington turf and will certainly get the jump on the aforementioned deep closers.  For a goofy longshot, I would use Formidable Heart, who is very well-bred for distance.  Perhaps the addition of Florent Geroux signals that the Darrin Miller barn is primed for this one.  If one of these four did not win, I would be a bit surprised.

As for the Arlington Handicap, I will once again not be betting Dullahan, who has just run a really strange campaign.  Why the connections are so bent on keeping him off his best surface (Meydan Tapeta not included) is completely beyond me.  Fortunately, I quite like Keep Up here.  He has run against and beaten some quality horses and has excuses for his two most recent losses.  While the barn does not win at a high percentage, the turf route statistics are quite good.  I expect a good run.  I have always liked old Rahystrada, still going strong at nine.  He is a deserving favorite and I will not toss him.  Clearly Coalport is a must-use if the turf is yielding based on his last two wins over wet Arlington turf, but with clear skies, highs of 81, and a 5-10 mph East breeze, I don't see that happening.  As such, I will likely use only these two to close the pick-4, maybe with a bit of Suntracer thrown in as well.

I will be at the track Saturday - paddock and apron as per usual - so follow my Twitter feed @HeadHeartHooves for any updates.  I will post the final pick-4 ticket and any other pertinent information.  I love all-stakes, all-turf, all-route pick-4's! 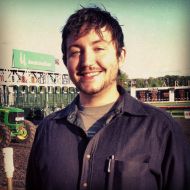