Ponies of the Track - Road to Slew: From Racehorse to Pony 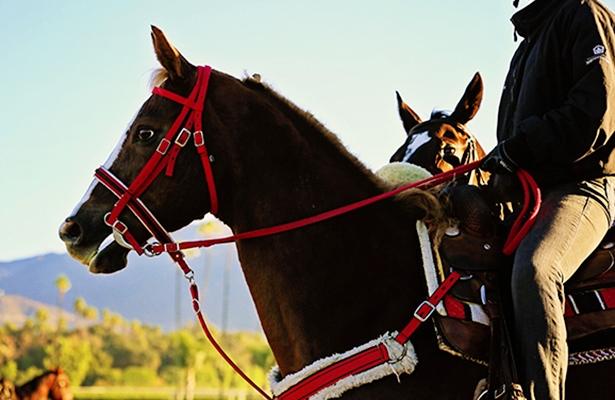 There are many forgotten heroes at the racetrack of the human variety: grooms, hotwalkers, EMTs, veterinarians, and jockey valets among them. But there are also equine heroes outside of the obvious racehorses: the outrider horses and lead ponies. They are kicked, they are bit, they are slammed into, and they are pushed around. They tolerate the immature two-year-old, the testy mare, and the lazy gelding. Their riders often endure the same difficulties. But these horses also provide guidance and comfort for many racehorses, as well as a best friend for many young children and loyal racetrackers that visit the track.

For racing enthusiasts that frequently watch racing on television or visit the track regularly, a pony horse may become familiar in appearance, but it is rather unusual for a pony horse’s name to be known. The name of the racehorse alongside the pony is in the program, on the television monitor, and in pedigree databases, but the pony is largely anonymous. But for hours upon hours – whether it be in the morning or afternoon – the pony works tirelessly, often encountering unruly racehorses and unpredictable weather. It is time to shine a light upon these hard workers.

Please enjoy my third installment of a new series featuring these horses, called “Ponies of the Track.”

Road to Slew: From Racehorse to Pony

Road to Slew has been a fixture at Santa Anita Park since 1998. A California-bred son of Slewpy, the gelding made eighteen of his twenty-five lifetime starts at the Great Race Place, earning his biggest victories with the San Gabriel Mountains behind him. Now, the easily recognizable flaxen chestnut – lovingly called “Roady” – can be seen most mornings at Santa Anita, ponying young Thoroughbreds as the sun begins its ascent into the sky.

Over the span of four and one-half years, Road to Slew raced twenty-five times, winning the Frank E. Kilroe Mile Handicap when it was contested at the grade two level and accumulating earnings of more than $875,000. Road to Slew is the only horse to ever capture Santa Anita’s Crystal Water Handicap on three occasions and when he accomplished this feat in his final career start in 2003, he became just the second horse in the track’s storied history to win three editions of the same stakes race.

When his racing career ended, Roady adjusted to life as a track pony for trainer Oscar Garcia. Like any Thoroughbred that makes the transition from racehorse to lead pony, Roady first had to become accustomed to Western tack and neck reining before he could begin escorting racehorses.

Nearly ten years after Roady began his new career as a pony, into his life stepped Taylor Houser.

“I first started ponying in October of 2012,” Houser, an experienced rider who learned the ropes of ponying through the help of various workers in Doug O’Neill’s barn, said. “A friend had told me that Oscar Garcia had a pony that he hardly used, so I went and talked to Oscar and he hired me.”

Since then, Houser and Roady have become a fantastic team, ponying Garcia’s trainees in the mornings at various Southern California tracks, chiefly Santa Anita and Del Mar. Roady has become an expert when it comes to ponying and is a dependable partner for Houser, using the skill and wisdom he has accumulated in his many years as a pony.

“Roady is a horse who never puts himself into danger,” Houser stated. “If he feels like he is going to get hurt, he lets me know. He knows exactly where the poles are on the track. I can drop my reins on his neck while loping and when we reach the three-eighths pole, I can tell him ‘whoa’ and he stops. He has been ponying for so long that he knows automatically [to do that]. I never have any problems on getting him to go. He is voice-trained, responds to leg cues, and is pretty light on his mouth, which makes it easy for me to work with the racehorse when I need to.”

Roady is typically a trustworthy horse to be aboard in any situation while ponying, but Houser has found that he excels in ponying two-year-olds.

“Roady is very good for the babies,” Houser said. “Since he is almost nineteen, he has the experience. Any time a baby goes to pass him or act up, he will warn them by turning his head quickly at them. He never kicks or bites. He tolerates quite a bit.”

Despite being such a trustworthy and well-trained pony, Roady still yearns for his racing days that ended nearly ten years ago.

“He has his good days where he behaves well and he has those days where he gets pumped up,” Houser stated. “I’ve almost been dropped a few times and he tries to bolt at times. The hardest part is breaking a horse off for a work, because I really have to hold him back. He knows what the gate is and knows exactly when to switch leads, too. Some days, he will switch leads just from experience and with no command. He will always have the heart for racing.”

Roady’s personality has captured Houser’s heart and, combined with the gelding’s reliability and skill, Roady has become a very special part of her life.

“Roady is a sweetheart. Horses know who their owners are and, man, does he get very talkative with me around,” Houser said with a laugh. “Whenever I have a bad day, I go and hug him; he always hugs back.”

“Roady is really good with kids,” Houser stated. “He is very gentle and when we give the kids rides [on him], he walks really slow.”

Roady also has quite the appetite – and not just for food denoted for horses.

“He is very curious,” Houser said. “Any time I eat or drink something [near him], he has to smell it and if he wants it, he takes it. He loves fruit: bananas, strawberries, mangos. [He loves] lettuce also; he chows it down.”

The more time Houser has spent with Roady, the more special the gelding has become to her. The same can be said for Roady. Just as Houser has become attached to the racehorse-turned-pony, Roady has become very fond of “his human.”

“Roady and I have a connection,” Houser stated. “He is an older horse, so I have a lot of respect for him and what he has to do in his job. He always greets me every morning with a nicker and when I’m not there, my boss always says how depressed he gets. I’ve had a lot of horses of my own in the past, but I’ve had the closest bond with him.” 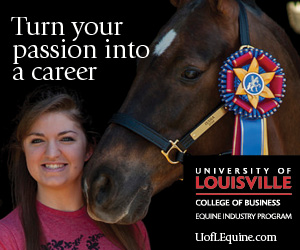