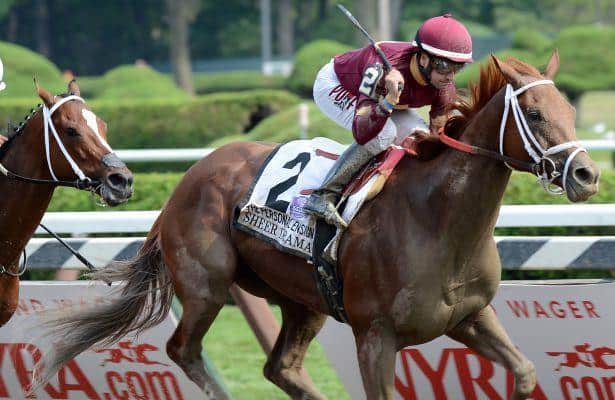 I would be lying if I said I didn’t have a special admiration for mares that can win going a mile and a quarter. With only two Grade 1 events restricted to fillies and mares at the classic distance of 10 furlongs, I always look forward to the Delaware Handicap for older horses and the Alabama Stakes at Saratoga for three year olds. This year at Delaware, it was a very talented horse, but one I didn’t think had the pedigree for the grueling distance. A half sister to champion sprinter Big Drama, Sheer Drama had shown she could handle two turns, but the step up to a mile and a quarter is a question of capability we ponder of every horse who attempts it.

Sheer Drama entered the Delaware Handicap as the second choice at 5/2 over a very talented Rosalind. Tracking the first ¾ of a mile behind the Fleur de Lis winning Frivolous, Sheer Drama overtook her rival confidently and was ridden out to win by a widening 2 lengths. The question of distance was answered, and at the highest level of the sport. The Delaware Handicap was her first Grade 1 victory and was only a prelude of what she was capable of.

The 5-year-old daughter of Burning Roma has compiled a season record of 3 wins and 4 seconds in her 7 starts, and has proven that she belongs in the elite company that will assemble for the 2015 Breeders' Cup Distaff. A look into her career will show progression from a successful, yet quiet youth, into one of the superstars of the toughest division in racing.

Starting off in January of this year, Sheer Drama entered the gates of the Florida Sunshine Millions Distaff with nothing more than 3 wins in 12 starts to her credit. Her lack of consistency landed her at 37-1 in the field of Florida breds. Being bumped at the start, she fell way back in the early going, but closed to a trifecta busting second place that turned out to be a prelude of what was to come.

Trainer David Fawkes was impressed with what he saw in the Sunshine Millions Distaff and decided to give his mare a shot at graded stakes competition in the Grade 3 Rampart also run at Gulfstream Park. Breaking better than the Sunshine Millions Distaff, but still being bumped, Sheer Drama tracked the leaders and engaged with Wedding Toast at the top of the stretch. Showing us grit and determination that had yet to be seen at the stakes level, Sheer Drama continued to wear down Wedding Toast only to be checked at the 1/16 pole by Joe Bravo as House Rules swerved into her path. Despite the check, Sheer Drama recovered and lunged to get a nose in front of Wedding Toast at the line for second. House Rules survived the inquiry and remained the winner, but this race revealed to the world that Sheer Drama is a serious runner and ready to continue her progression into stakes company.

Next up would be the Grade 2 Royal Delta. Set off as the second favorite behind House Rules, Sheer Drama got something she hadn’t in her previous 2 starts, a clean break. Stalking the leader through the first half mile, she then shifted a gear and started pulling away from the field at the half mile pole. Struggling to stage a pursuit was House Rules who crossed the wire in second place 6 ½ lengths behind Sheer Drama. It was a dominance that had not yet been seen out of the Fawkes trainee, and this was still just a springboard of what was to come over the summer.

Tougher competition was primed for the La Troienne on Kentucky Oaks day, and also the first Grade 1 start for Sheer Drama. Breaking smoothly, she settled nicely into stride stalking the leaders. Being swung 4 wide around the final turn she dug deep to get past Gold Medal Dancer, but couldn’t reign in Molly Morgan who made an impressive move past the field on the rail entering the stretch. It was a tough loss, but she would be given another shot under the Twin Spires of Churchill Downs in the Fleur de Lis. Finally earning the respect of bettors, she was set off as the 9/5 favorite, but again would disappoint as she finished a tough second to Frivolous. This concluded her spring campaign with a frustrating 1-4-0 record through 5 starts.

Glory was soon to come in the Delaware Handicap, and then would be outdone with the finest performance of her season. The Personal Ensign Invitational is considered top race for older mares at Saratoga’s famed meet and drew a small but championship worthy field. Untapable, Stopchargingmaria, Got Lucky, America, and Tiz Windy could all win this race on their best day. But August 29th wasn’t their best day. Set off as the 7/2 third choice, Sheer Drama calmly settled into tempo 2 lengths behind Untapable and Stopchargingmaria. As the two top class fillies jostled for position on the front end, a horse molded by the experience of her campaign sat poised, waiting for the moment to pounce. Just before the quarter pole, Joe Bravo gave his mount her cue, and she responded in stride. Surging up to the leading pair, she floated past the leading pair 3 wide entering the stretch. Untapable stubbornly refused to yield, and after a gritty run toward the line, she ran out of gas with Sheer Drama pulling away to win by a length and half.

This was not just another win to her record. The Personal Ensign showed a maturity that all horsemen wish to see headed into the fall championship races. Sheer Drama had again faced the adversity of her competition and demonstrated that she has the class and talent to win the Breeders’ Cup Distaff. She has been training steadily at Gulfstream Park putting in a series of solid works. Fawkes is currently planning to ship his star mare to Keeneland the Friday before the race to allow a week of acclimation and adjustment to the surroundings. In racing, we thirst for the anticipation of witnessing something great. The build up, the exhilaration, and the excitement of the starting bell and the clash of gate doors slamming open. The tension of the frozen moment while we wait in silence for the maelstrom to come. With a good horse, this anticipation begins before they enter the gate. With a great horse, you clammer with excitement to learn when they may run again. Sheer Drama’s season has been building with anticipation. With each race, the bar has been raised, and she has rose to the occasion. Her 2015 campaign is exactly what the Breeders’ Cup strives for. It is culmination of a season that has been built on an ever increasing foundation of endurance and class. Sheer Drama is ready to take on the best in the Distaff, and she may very well come out as a Breeders’ Cup Champion. 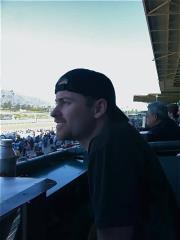