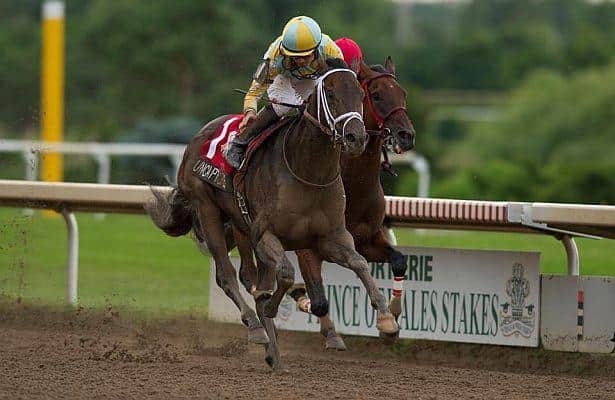 For the fourth consecutive year, the Queen's Plate winner will not pursue the Prince Of Wales Stakes. LEXIE LOU, the filly that powerfully strutted her best stuff against the opposite sex 3 weeks ago at Woodbine will bypass Canada's second leg of the Triple Crown series. Trainer Mark Casse indicated two key reasons that contributed to the decision not to run her in Fort Erie's marquee event of the season. First, the $500,000 affair would be a third major race for his star filly in a short time (six-week span), and secondly, she has never competed over a dirt surface.

The last Queen's Plate winner to contest the second leg was BIG RED MIKE, who finished third in the race in 2010. Since then, INGLORIOUS (2011), STRAIT OF DOVER (2012) and last year's winner, MIDNIGHT ARIA, have all skipped the Prince Of Wales for various reasons.

Despite the absence of the Plate winner, Casse will still have representation in this year's race with Matador, seventh in the Queen's Plate and East Side. The Sovereign Award winning trainer seeks his second consecutive win in the Prince of Wales after having won last year's edition with 2012 Canadian Horse of the Year, Uncaptured.

A quartet of horses who ran in the Queen’s Plate are entered in the Prince of Wales, headlined by the runner-up, Ami’s Holiday. Along with previously mentioned Matador, the two other horses from the Plate that showed up at the border oval include sixth-place finisher, Lions Bay, and ninth-place finisher, Coltimus Prime.

The second jewel of the illustrious Canadian horse racing Triple Crown has been held at this track since 1959, and up until 2012 the event was held on its customary Sunday afternoon. However, tradition was broken last year as track officials and event organizers attempting to boost attendance and wagering while trying to minimize competition with bigger markets, moved the race to a Tuesday. Another determining factor for the move was the scheduling of jockeys competing in the race, that ride at Woodbine. Tuesdays are dark at the Toronto track, so running the Prince Of Wales on Tuesday is very convenient for riders. The very innovative idea proved a financial success for Fort Erie Racetrack.

On July 29th, bettors across the country will be focused on my home track for the 79th edition of the Prince Of Wales Stakes, run at a distance of 1 3/16-miles. Don't miss this one-of-a-kind race, now run on a Tuesday night.

Let's preview the field of 10 Canadian-bred three year olds from the rail out.

1-EAST SIDE/Stein/Casse--Following two sprints over the Woodbine poly, this English Channel runner was slated for a one mile turf start, but the race was taken off the grass and run at 8.5 furlongs over the main track surface. The initial attempt at two turns in mid-June resulted in a winning maiden effort. He has been away since then, but he has worked swiftly during the interim. Like several of his opponents, he will try dirt racing for the first time.

2-AMI'S HOLIDAY/Contreras/Carroll--The colt was my QP selection and he turned in a dynamite race from post 15 in a runner-up performance. After getting away slowly from the gate, he closed from far back before encountering some traffic at the top of the lane. He was guided to the inside and gamely tried to get to the eventual winner through the final furlong. He draws a far better post position in here, and with a smaller field to navigate through, plus the absence of the Plate winner, it all should add up to victory. However, the cause for concern is no dirt racing experience. Maybe the class advantage he holds will be enough for him to prevail.

3-ASCOT MARTIN/Campbell/Keogh--This colt's only dirt attempt came last fall at Fairgrounds, after a scheduled turf start was moved to the dirt. He came from far back with a wide sweeping move to record a very good second place effort. Despite the runner-up showing, he's still a maiden though, and that's the level where this one belongs.

4-MATADOR/Husbands/Casse--He spent the winter and spring racing on dirt during the U.S. Triple Crown trail, but was overmatched. Matador returned to Canada to get ready for a shot at glory in the Queen's Plate. Although he received support at the windows for the big race, the colt turned in a disappointing showing, racing toward the rear of the field and never getting untracked, resulting in his seventh-place finish. Not quite sure what surface he prefers, but his dirt experience could come in handy here.

5-MONEY TALKS/Olguin/Tharrenos--This horse is strictly a synthetic runner having done all his training and racing over the Woodbine plastic. He spent his juvenile season racing strictly against Ontario-breds, but in 2014 he's faced older runners in all four starts in optional claiming company. After losing his opening three races to kick off the year, he was given a two month freshening before returning a sharp winner by nearly five lengths July 18th. His latest has certainly signaled he's regained his form and that may be the spark he needs, but this will be his initial dirt try, so it's an iffy proposition on how well he'll take to the surface.

6-COLTIMUS PRIME/Da Silva/Nixon--This colt has two wins to his credit with one of them coming when he closed from off the pace. However, he appears to do his best racing on or near the lead. He employed a close-up stalking style in the Plate and held his own until fading back on the far turn. Off the board in his lone dirt try, but that race was a G2 Kentucky Derby prep event. Probably will be the pace setter and since the overall quality of this field isn't as deep as it was three weeks ago, he should go further this time and be part of the exotics.

7-SMART SPREE/Wilson/Frostad--His trainer has won this event on two previous occasions, but after a half-dozen starts, this colt by Smart Strike is still looking to break his maiden .

8-LYNX/Pennington/Lynch--Shipper has divided his eight starts equally between Woodbine and the States. Blanked in four starts as a juvenile on the poly, this three year-old son of Curlin finally found the winner's circle at Parx two back with a big winning effort. He saw action in the G3 Pegasus at Monmouth last month, but it was a miniscule five horse field and he finished a distant third.

9-RHYTHM BLUES/Kruse/Gonzalez--He was fourth in the Plate Trial and his connections flirted with the idea of running this colt in the Plate, but opted to race him on the Plate undercard where he finished third in an allowance event. Still eligible for NW1 conditions, but he's had success on the dirt with a win at Parx and a third-place effort at Gulfstream. The fact that he's prepared by a trainer that has plied his trade at this track for several seasons with plenty of success, could prove beneficial for this horse. A win by this barn would be sweet and have special meaning for the locals.

10-LION'S BAY/Moran/Attard--He stumbled coming out of the gate in the Queen's Plate, before settling in mid-pack. Made a closing move into the far turn, but couldn't persevere in the stretch run. He still managed to finish in front of the half of the field. Off just three lifetime races going in, this colt gave a remarkable performance. I believe he garnered a lot of experience from the outing. Just how he transfers that huge showing to the F.E. surface is unknown.

If you’re searching for horses other than the favorite, Matador is a good choice as his dirt form is better than suggests having faced top graded horses when racing in the States. Coltimus Prime deserves consideration as he is always close to the front and could be extremely dangerous on the lead if things go his way. Rhythm Blues also deserves a look because of the trainer factor. However, AMI'S HOLIDAY is the strongest horse in the field and the Plate runner-up should prove best at the wire.

Good luck and as always, enjoy the race.