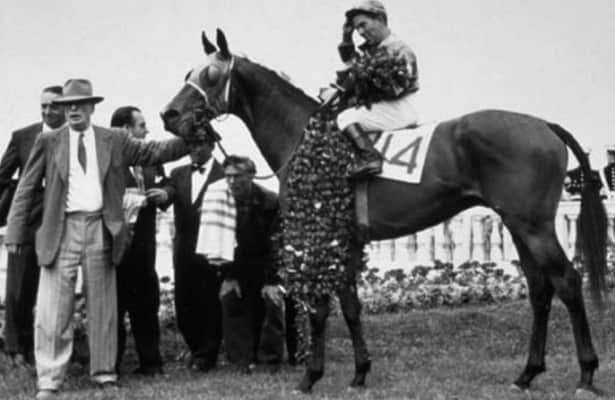 In 1944, jockey Conn McCreary was on top of the world. He had won the Kentucky Derby on Pensive, riding for the powerful Calumet Farms. His book was filled every day. He was in great demand as a rider. Money was easy.

But by 1950, all that had changed, when a succession of losses caused him to hang up his tack. An attempted comeback in 1951 seemed equally futile. Trainers chased away his agent. No one wanted any part of McCreary. Through the early portion of the year, he had recorded only four winners, an abysmal record for a jockey of McCreary’s caliber. The diminutive jockey had been regarded as a dazzling stretch rider, but it appeared he had forgotten how to time pace. The late rushes that he was famous for fizzled out in mid-stretch; he lost on horses that were supposed to win.

When McCreary arrived at the track every day, kibitzing with fellow riders in the jocks room, there was work for everyone but him. The 30-year-old veteran couldn’t even be trusted with a 99-1 shot in a claiming race. Around the track it was commonly assumed that he was washed up. The only way McCreary could get a ride is if he took the bus. He was a jock with a broken whip. Money was difficult. Just to keep himself and his family going, McCreary had taken a variety of jobs.

Unknown to McCreary at the time, owner Jack Amiel had a Derby long shot, Count Turf, who was being regarded with the same lack of respect. Count Turf, a none-too-promising son of 1943 Triple Crown winner Count Fleet, had won only one race in 10 starts during the year.

A restaurateur from New York, Amiel bought the bay colt for $3,700 at the 1949 Saratoga yearling sale, and after observing his horse in various races, he liked what he saw. When Amiel watched Count Turf run in the Wood Memorial, where the colt was stopped cold in the stretch after another horse came over on him and he still made another run to finish fast and strong, he became convinced his horse could win the Derby. Amiel just needed to find the right jockey. One who would have the cool, heart, nerves and experience.

Count Turf, named in honor of his sire and a hamburger joint owned by Amiel on Broadway, was lazy out of the gate but came on in the stretch. The horse’s approach to racing perfectly fitted McCreary’s notable riding style. Amiel remembered, and he insisted that McCreary was the only jock that could handle Count Turf.

Down and almost out, McCreary was approached by Jack Amiel, and upon being asked for his riding services, McCreary hesitated and reminded the owner about all the negative talk swirling around about him. Amiel acknowledged to the jockey that he had heard the chatter but didn’t believe any of it, He said he would only send Count Turf to the Derby if McCreary rode him. McCreary accepted the offer.

When trainer Sol Rutchick heard that McCreary would be the rider on Count Turf for the big race, he protested and dropped out. Amiel, who was an experienced horseman but wasn’t a licensed trainer, found a substitute, George "Slim” Sulley, a part-time employee of the stable who had training experience, and together they trained the horse for the Derby.

Except for his breeding, Count Turf had little to recommend him for a Derby triumph. Regarded so lightly among the 20 horses who ran for the roses that he was placed in the “mutuel field,” a coupling of the five entrants with the least chance of victory in the secretary’s opinion. Of the 76 sportswriters polled by the Associated Press, not one had picked Count Turf to win, place or show.

The 1951 Kentucky Derby, with a record purse value of $126,100, of which $98,050 went to the winner, was considered “wide open” by racing pundits. What was deemed as “probably the largest crowd that ever saw a horse race in America,” settled on Battle Morn as the 5-2 favorite, noting that he had shown class and consistency. In addition, the favorite would be ridden by Eddie Arcaro seeking his fifth Derby triumph.

With a fantastic roar from the crowd, the largest array of Derby horses in 14 years were on their way. Fellow field horse Phil D. did most of the early running. He was first past the stands and still on top after three quarters of a mile before Hall of Fame put up a challenge and ran the fight out of the leader. At that point, Repetoire began to steal the show as the unbeaten colt came on to nail the lead at the mile marker. However, Repetoire’s glory was fleeting. For around the final bend and moving very quickly was Count Turf — and the voice of the track’s loud-speaker system hailed him as "Timely Reward" (a horse who ended up finishing tenth) until the last furlong.

As they turned for home, McCreary took his mount to the rail and went to his whip for the first time, and Count Turf responded with a burst of speed that soon left the rest of the field far behind.

And neither Count Turf nor McCreary was in a stopping mood. Now in the clear, McCreary aimed the colt's nose for the wire, a quarter mile away. They were one, pulling away with speed to burn, and halfway down the stretch the astonished crowd of more than 100,000 saw the big No. 14 on the saddlecloth and knew the long shot couldn't miss.

Unleashing the race of his life despite losing a hind shoe, Count Turf sailed under the wire clear by four lengths to win the then richest Kentucky Derby in history in 2:02 3/5. The unsung son of the immortal Count Fleet, unnoticed in the mass confusion of the public, was now the most famous horse in the world.

It had been 26 years since a field horse won (Flying Ebony in 1925), and the winning time clocked by Count Turf for the mile and a quarter was nearly two seconds faster than his daddy registered in 1943.

As for Sol Rutchick, he changed his mind at the urging of Amiel and planned to take a flight to Louisville the morning of the race. But family matters detained him in New York, he missed his flight and didn’t get to see his charge romp to victory. Instead, the trainer had to root Count Turf home by listening to the broadcast.

Even though Sulley and Amiel had performed the day-to-day training duties for Count Turf, Rutchick, whose name is listed on the program as trainer, “had been calling substitute trainer Sulley every day, telling him what to do,” Amiel mentioned to journalists covering the race. It didn’t matter, there was enough honor to share around for all. Amiel also revealed to the press that he “bought the young colt simply because it couldn’t be too bad with that kind of breeding” and entering his horse in the Derby was "just a hunch.”

Conn McCreary was also high on Count Turf’s chances. He told newspapermen he “thought his horse would win” but admitted he “didn’t make a wager on him.”

The triumph of the beautiful bay colt, whose royal lineage had been sorely overlooked by experts and the multitudes alike, set another mark in a day filled with record turnouts and betting. Reigh Count won the Derby in 1928, then sent back the wonderous Count Fleet to win it in 1943. And the line became the first in Derby history to produce a grandfather-father-son winning combination.

It was more than a vindication of superb racing blood. It meant the comeback of Conn McCreary, who proved he still had the old fire and was not “washed up.” He had found what he had lost.

In the winner’s circle for the presentation of the blanket of roses, a beaming Conn McCreary sat atop Count Turf, both winners of the ride of their lives — powered, really, by one man’s belief in both.