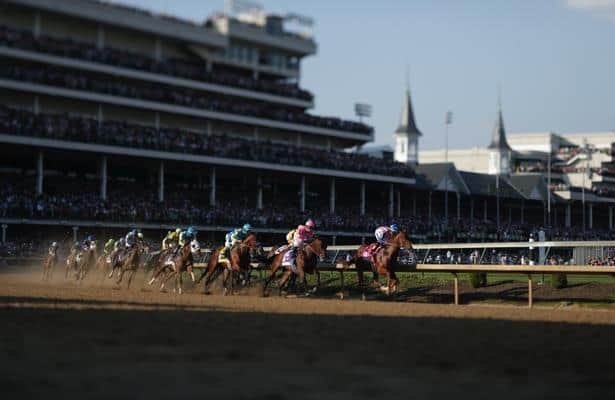 Like father, like son, we say, because of similarities in how fathers and sons look and how they behave. Applying the saying to horses, it’s all about bloodlines. Fathers and sons resemble each other, and from generation to generation, sons tend to do what their fathers did before them.

Of the past 145 Kentucky Derby winners, 12 have gone on to sire a Derby winner (or winners). But this year, there is zero chance that number will increase by one, as not a single horse in the 2020 Kentucky Derby projected lineup can boast of a Derby-winning sire.

In fact, it has been nearly a quarter century since we last saw a Derby winner, Grindstone, emulate his Derby-winning father, Unbridled.

That interval pales in comparison to the 37 years the United States awaited their next Triple Crown winner when American Pharoah pulled racing fans out of the abyss in 2015.

Until a couple of months ago, it appeared American Pharoah — winner of Derby 141 and U.S. Champion Freshman Sire in 2019 — would have an opportunity to become the 13th Derby winner to sire another winner as a pair of his sons sought a spot in the Kentucky Derby in September.

Café Pharoah, winner of the Hyacinth Stakes (February) and Unicorn Stakes (June), and Danon Pharoah, who proved best in the Japan Dirt Derby (July), were the top two point earners on the Japan Road to the Kentucky Derby.

The Japanese series of races is intended to provide a place in the Derby starting gate to the top finisher in the series. If the connections of that horse decline the invitation, the place is offered to the second-place finisher and so on through the top four finishers.

But on July 12, connections of Café Pharoah indicated the horse would not come to the Kentucky Derby. Four days earlier, in the Japan Dirt Derby, Cafe Pharoah finished seventh of 13, and that performance affected the connection’s decision not to ship over.

As early as last fall, another former Kentucky Derby winner, Street Sense (2007), appeared to be in good position to sire a Derby winner in 2020 when Maxfield strolled home a 5 1/2-length winner in the Breeders’ Futurity at Keeneland, catapulting the Godolphin-owned horse into the vanguard of leading candidates to wear roses in the spring.

Maxfield then was shipped to Santa Anita for his next scheduled start in the Breeders’ Cup Juvenile, but he came up lame, missed the race and then underwent surgery to remove an ankle chip.

After showing no negative signs from the surgery, the talented colt began breezing in mid-February and continued to impress in his morning works into March. Then the onset of Covid hit the U.S., postponing the Kentucky Derby until September, which allowed trainer Brandon Walsh more time to make sure Maxfield was ready.

Walsh revised Maxfield’s schedule, and the dark bay/brown colt made his 2020 debut on May 23 in the Matt Winn Stakes. It wasn’t an easy spot, but he managed to rally from eighth place at the three-quarter marker and surge to the front in the late stages to win by one length and remain unbeaten in three starts.

Connections of Maxfield decided to bypass the Belmont Stakes in early June and target the Blue Grass Stakes the following month for his final Derby tune-up, but a few days after that decision was made, a condylar fracture was discovered after a workout at Keeneland, forcing Maxfield out of the Derby picture.

That five-year time frame for a Kentucky Derby winning father/son combination is tied for the shortest span with Pensive/Ponder.

The first Derby winner to sire one of his own was Halma. The 1895 winner was represented by Alan-A-Dale, winner of the 1902 running.

The 1943 Triple Crown winner, Count Fleet, and 1949 Kentucky Derby winner, Ponder, hold the distinction as the only sons of Derby winners to win the race themselves and then go on to sire a Derby winner of their own.

Bold Venture, who took the 1936 edition, stands atop the list with two sons to match him in Kentucky Derby glory. His first son to win the coveted prize, Assault, would go on to become the 1946 Triple Crown champion. Four years later, his second Derby-winning son, Middleground, came shining through on the first Saturday in May.

In addition to winning the Triple Crown, Assault’s winning of the Derby by eight lengths is the largest margin of victory in the race’s history. He is one of four horses to accomplish that feat, and also the last.

I will digress at this point, for it is important to recognize four stallions. Two of them raced in the Derby but did not win. The other pair did not even participate in the event. The notable quartet are part of Kentucky Derby lore, with each having sired three Derby champions.

Falsetto raced in the Derby’s fifth running in 1879, losing by one length. The Derby was his only loss in five starts during the year, and he went on to be named American Champion 3-Year Old Colt. His stud duties in Kentucky produced Derby winners Chant (1894), His Eminence (1901) and Sir Huon (1906).

Bull Lea, the foundation sire of Calumet Farm, one of most successful and powerful stables in U.S. racing history and owners of the most Kentucky Derby winners (eight), finished in eighth place and 17-lengths in arrears in the 1938 running of the Derby, but as a stallion during the heyday of Calumet, he contributed three winners: Citation (1948 Triple Crown), Hill Gail (1952) and Iron Leige (1957).

Finally, there is Sir Gallahad. The French-bred colt, sired in 1920, raced in his home country and in England before being retired after his 4-year old season. In 1926, he was bought by an American syndicate and was registered in the United States as Sir Gallahad III. He is responsible for Triple Crown winner Gallant Fox (1930), Gallahadion (1940) and Hoop, Jr. (1945).

As for this year’s Derby, time will tell whether the eventual winner will be represented by a future son wearing the roses.