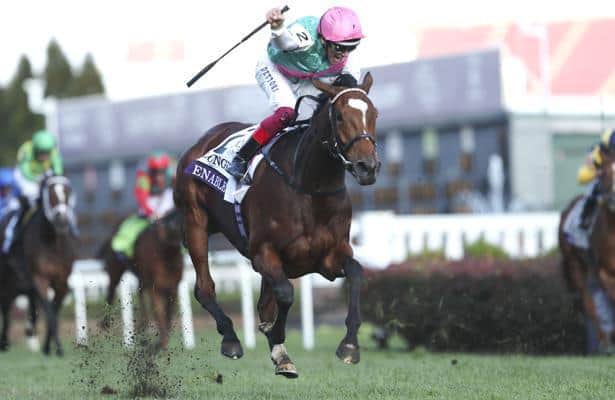 For a record 10th time, the Breeders’ Cup will be held next weekend at Santa Anita Park, in Arcadia, Calif. The year-end championships, which began in 1984 as a one-day spectacle featuring seven championship races, expanded in 2007 to feature the world’s best thoroughbreds in a two-day format.

Decades have passed since that first running at Hollywood Park, leaving a considerable and sufficient number of races to choose a personal preference from each of the 13 divisions.

Listed below are my choices, presented in the scheduled running order of this year’s races. And note: The Juvenile Turf Sprint, which will begin the festivities on Friday, only made its debut last year.

Forget sitting in assigned seats. Attendees opted to stay dry and warm while watching the first ever two-day Breeders’ Cup inside huddled around monitors.

Steady rain, cold, fog and yielding turf did not hamper Nownownow from winning the inaugural running of this event. The 2-year old trailed the field for the first five furlongs while saving ground along the inside behind a wall of horses before swinging out with a quarter-mile left to race. He flew six-wide into the stretch and began closing fast under steady left-handed urging to get up to win by a half length.

Despite two broken bones in her right foreleg -- when or where it happened in the race is uncertain -- Flanders showed great heart, willingness and determination in her victory.

Following a terrific duel with her own stablemate, Serena’s Song, that lasted the entire stretch in which the pair never seemed to be more than a head apart, Flanders got her nose out in front right at the wire to win.

From the beginning, she had all the makings of becoming a special filly, and Lady Eli, a graded stakes winner in her second lifetime start, dominated this million-dollar turf stakes to keep her record perfect. Her final time remains the fastest ever in the Juvenile Fillies Turf.

Receiving a perfect trip behind a three-horse speed duel, Lady Eli secured a nice spot in fourth down inside until the top of the lane when a large opening occurred. Displaying her patented late kick, Lady Eli exploded through and won going away by nearly three lengths.

This performance was jaw-dropping, and it captured the adoration of the public on both sides of the Atlantic.

Born in Kentucky, Arazi raced in France, where all his contests were on grass with right hand turns. Poorly drawn on the extreme outside in a 14-horse field, Arazi started slowly before unleashing an explosive and breathtaking burst of speed to run away effortlessly from his rivals. The colt’s five-length victory was so easy that his jockey, Patrick Valenzuela, eased him up about 70 yards from the finish.

I had followed Ventura since she won at Keeneland early that spring. One race prior to her Breeders' Cup win, I witnessed the filly finish second at Woodbine, and I was big fan of jockey Garrett Gomez, who I had met that day, so there was big-time rooting interest here.

After not breaking sharply away from the gate as she usually did, Ventura found herself racing in 10th place down the backside. Around the turn, she circled the field with a devastating five-wide run, then blasted down the stretch, passing the leader inside the eighth pole while powering to an easy four-length victory in the end.

It was satisfying to see California Flag get it done following a 10th-place finish the year before, when dueling into the stretch and fading to 10th.

Horses with experience on the tricky Santa Anita downhill course usually leverage that over horses that lack familiarity. Case in point: California Flag. The locally-based horse, with a pair of wins over the peculiar layout, secured the early lead and proceeded to set all the pace before kicking away late.

I was assigned to cover this race for Horse Racing Nation, so in hindsight, it was a pretty easy choice. This was quite the performance.

Off to a slow beginning, Liam’s Map, who preferred to race on the lead, found himself stuck in behind horses with no place to go down the backstretch. Showing versatility and displaying his class, the heavily favored 4-year old gray colt found an opening and rallied from off the pace to win in track record time in his career finale.

A storybook ending for Lady Eli, who had returned to the races that summer after being away for 13 months following a battle with laminitis, was what racing fans were hoping for. She gave a courageous effort but came up a heart-breaking nose short. The sting of her loss still hurts.

A heroic bid for a second Breeders' Cup title by Lady Eli was thwarted right at the finish line by Queen's Trust. Lady Eli burst to the lead in mid-stretch, but Queen's Trust came after her with a furious rally on the outside and just got up by a nose over the race favorite.

This was the first Breeders' Cup I attended, held at Woodbine, about an hour’s drive from my home. The weather was perfect for late October.

Guided over to the inside and saving ground over the speed-favoring track, Lit de Justice, under a superb ride from jockey Corey Nakatani, overcame not only the track bias, but 12 rivals, when he rallied from last place to first. His victory made trainer Jenine Sahadi the first woman to win a Breeders' Cup race.

Being a huge Goldikova fan, I loved that I had the opportunity to witness history when I walked into Churchill Downs that fall day. She did not disappoint.

With a scintillating turn of foot, Goldikova exploded down the stretch and became the first horse to win three Breeders’ Cup races.

Of all Breeders’ Cup races, this one gets my top billing.

Matching up two of the best fillies ever, it was an epic battle right to the wire. Unbeaten Personal Ensign delivered an electrifying rally from a seemingly hopeless deficit to nail Kentucky Derby winner, Winning Colors, on the finish line to win by a scant nose.

The entire racing world was waiting for a Prix de l'Arc de Triomphe winner to win the Turf in the same year. I was confident that this time, one would. Once again, being in attendance with a chance to witness history was thrilling, and a memory that will forever be etched in my mind.

After out-dueling Magical -- it was a ways back to third -- she roared home over some testing ground at Churchill Downs.

I loved all the crazy things about this race and its bizarre payoff. As race caller Tom Durkin exclaimed, "An impossible victory."

The tote board read 99-1, but 133-1 were the actual odds on the obscure longshot from France who had never run on dirt or in this country. The 5-year old horse was ridden by Jerry Bailey, who couldn’t so much as understand the instructions given to him by trainer Andre Fabre in the paddock. However, Arcangues and Bailey communicated perfectly with each other as they surged to the lead in deep stretch to shock the racing world.