2015 Prince Of Wales Stakes: Is There A Ghost Buster? 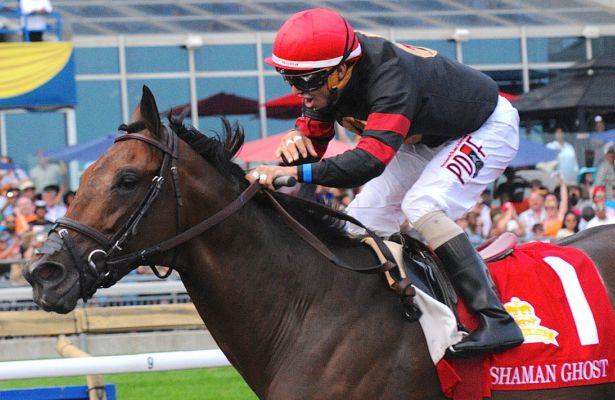 Queen's Plate winner Shaman's Ghost appears to have scared off the competition for Tuesday night's $500,000 Prince of Wales at Fort Erie Race Track, and was installed as the 7-5 morning line favorite in a field of seven.

In addition to Shaman's Ghost, three returning rivals from the Plate, plus three newcomers, make up the 80th edition of the Prince of Wales and the second leg of the Canadian Triple Crown. The Canadian-bred 3-year-olds will run a distance of 1 3/16 miles over the dirt course.

If Shaman's Ghost can defeat the competition again, he'll be one win shy of completing the Triple Crown--an honor that only 7 horses have accomplished since the series was established in 1959, the last being Wando (2003).

The appearance by Shaman's Ghost marks the first time in five years that a Queen's Plate winner will participate in the Prince of Wales Stakes. Incidentally, the aforementioned Wando was the last Plate winner to score victory in the second jewel.

Will Shaman's Ghost continue his journey toward Triple Crown achievement? Will his main rival Danish Dynaformer turn the tables?  Or will someone else spoil the party altogether? To answer those questions, let's go horse by horse in post position order.

1-Scorch/Emma Wilson/Mark Frostad--This maiden colt was considered for the Plate, however, connections decided against running him in stakes company. He did compete on the Plate undercard against his own kind, finishing fourth. He raced mid-pack until the final turn then began to close on the leaders along the rail. Once into the straightaway, he made his bid, but a rival to his outside made a narrow gap even more narrow and prevented this colt from getting through or angling out. Ultimately, this horse got squeezed back and lost his momentum. He's winless after five starts and belongs in maiden company.

2-Conquest Boogaloo/Shaun Bridgmohan/Mark Casse--Whether it's been self induced or the conditions of the race itself that he's encountered, trouble has hindered this runner every time he's raced. The same old woes continued in the Plate. He got shut off coming out of the gate and found himself in last place, forced to race wide for a good portion of the race. Began his advance as the field headed into the far turn. He continued on, going widest of all as the leaders rounded the turn. He responded positively, closing resolutely to finish third, beaten just two lengths. Faces a much smaller field here, but switches to dirt for the first time. If he takes kindly to the new surface, this late runner, to have any chance, must race trouble free, something he hasn't done in his career up to this point.

3-Field Of Courage/Eurico DaSilva/Mark Casse--After an opening debut loss in the Simcoe Stakes last summer, this Marchfield colt delivered three wins in a row, including two this year. Was last seen in the Plate Trial six weeks ago where he moved from ninth-place at the half-mile mark into second place with a four wide run and challenged for the lead, but in the late stages of the race he was empty and faded to fifth. He finished in front of half the field and his margin of loss was only four lengths. That was a solid effort against seasoned stakes horses. Morning works since then seem to have him refreshed and ready. If he can transfer his form to the dirt, he should continue to improve. Trainer has won this race twice with horses that have skipped the Plate.

4-Shaman's Ghost/Rafael Hernandez/Brian Lynch--Ghostzapper colt is on a four-race winning streak after capturing Canada's most prestigious event. Behind quick fractions, he raced mid-pack for much of the 10-furlong classic before rallying strongly under jockey Hernandez through the stretch to run down Danish Dynaformer inside the final sixteenth to top off an thrilling finish. As mentioned earlier, it's been awhile since a Plate winner has raced in the Prince Of Wales, but normally, three-week old form from the first leg of the series usually holds well in this event, and this runner with a fast closing kick is in very good form. Surface shouldn't pose any problems, as he has won twice over dirt. Of course, the one to beat.

5-Danish Dynaformer/Patrick Husbands/Roger Attfield--His runner-up showing in the Plate last out and a third-place finish in the Marine Stakes two back, have both come at the expense of Shaman's Ghost. Three weeks ago at Woodbine, he raced well off the pace, before beginning to move up on the backstretch. Was in full flight circling the field on the far turn, getting to the lead in the stretch and looked poised to give his trainer a record breaking ninth-Plate victory, but couldn't fend off the determined late rally by the winner. Even though this is his first start over dirt, he still looms the main danger to the Plate winner, but his rider must avoid moving prematurely.

6-Breaking Lucky/Jim McAleney/Reade Baker--In the Plate, this Lookin' At Lucky colt was bumped at the start, then settled along the inside. Went wide around the far turn while moving rapidly, finding himself in second place with a quarter-mile left. Couldn't stay with the big guns as they passed him in the stretch, but his fifth-place finish found him far ahead of the remainder of the field. His only dirt try was his debut at Gulfstream Park in March. Shorter distance here should help him, but he really appears to be overmatched again.

7-Cut To The Chase/Luis Contreras/Nick Nosowenko--Surprise supplemental entrant is the most experienced runner in the field with a dozen starts. After breaking his maiden in his third start last September, he then spent the majority of his time racing against non-winners 2 lifetime, finally breaking through (albeit narrowly) in his seventh attempt at that class level. Gelding's latest outing saw him finish third versus optional claiming company. As a measuring barometer, he was defeated three races back by horses that were also-rans in the Queen's Plate. With the exception of a lone turf start, all of his races have come over the Woodbine polytrack. This will be the furthest distance he's attempted and he's given up the lead in shorter contests. Has plenty of speed. but is outclassed. Expect him to be the pace setter, then give way.

ANALYSIS: The top two finishers from the Plate have a distinct class advantage & sport the top speed numbers, and one of the them should prove victorious. Both are nicely drawn and are late running types that always manage to gain striking position by the second call, a huge benefit for that style of running. The two horses should provide another exciting finish.

Shaman's Ghost has won four in a row and his late kick makes him tough no matter how fast or slow it is up front. If he can work out a similar trip to his journey at Woodbine, he should again be tough to deny. Danish Dynaformer can turn it on late too, and if his rider can avoid moving too soon, such was the case in the Plate, he may prove best in the end. Third-place Plate finisher, Conquest Boogaloo, is also a late runner that has demonstrated he can compete at the class level. However, he doesn't always secure a prominent position before the real running begins. He's void of early speed and appears to be a horse that's more dependent on a quick pace than the top two and probably won't receive such a benefit. In addition, there's no guarantee that trouble won't curse this horse again, but if he somehow manages a good-clean trip, his two Plate rivals will most likely get first jump at the leaders and the duo will prove extremely difficult to catch.

PLAY: I strongly feel it's a two-horse race and the superfecta is the way I'll go here. I'll key Shaman's Ghost and Danish Dynaformer in the first two slots and hit the ALL button to fill the third and fourth spots.

Good luck, and as always, enjoy the race!!