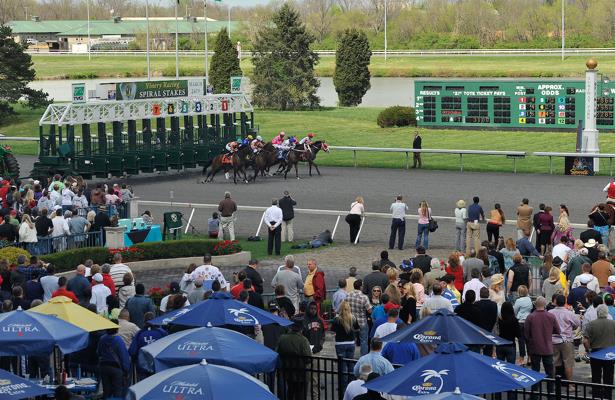 The John Battaglia Memorial Stakes, a precursor to Turfway Park's Jeff Ruby Stakes (G3) on the Kentucky Derby trail, this Friday night features a number of horses gunning for their first stakes wins. That's not to say they haven't tried with a classy field of 12 lined up.

#7 Somelikeithotbrown, the 8-5 morning line favorite, is making his first start since the Breeders’ Cup Juvenile Turf at Churchill Downs. The Mike Maker-trained colt broke his maiden at Saratoga in his second start before heading straight into graded stakes company. He was second in both the With Anticipation  (G3) and the Pilgrim Stakes (G3) before nearly taking the Breeders’ Cup Juvenile Turf in a blanket finish, just behind winner Line of Duty and Uncle Benny. While Somelikeithotbrown has never run on an all-weather surface, I believe his pedigree suggests he'll handle it.

#12 The Mackem Bullet, trainer Wesley Ward's contender, is a 3-year-old filly. She has never won a stakes race but was competitive last season in Europe, placing in multiple stakes, including one at Royal Ascot. She finished sixth in the Breeders’ Cup Juvenile Fillies Turf, then ended her season Dec. 31 when winning a local allowance optional claiming race. She could very well win this race, too, in preparation for some bigger spots in the spring, likely back on turf.

#9 Naughty Joker was second in the Spendthrift Juvenile Stallion Stakes at Churchill Downs in his second start. He has never been worse than second in his three-race career over both turf and dirt. In his final start of 2018, he broke his maiden on Churchill Downs' main track. Pedigree suggests this 1 1/16-mile distance suits him, and that he should improve at 3. Ward also trains for Ken and Sarah Ramsey, all top Turfway connections.

#2 Wallace is a 12-1 morning line shot to watch. He enters after a third-place finish in the Atlantic Beach Stakes at Aqueduct that was taken off the turf. Previously, however, he won over synthetic in a Woodbine stakes, leading every step of the way. The gelding is bred to be just fine at the 8.5-furlong distance and could hold on for a piece.