Back to the Front for Smiling Tiger in Triple Bend (Video) 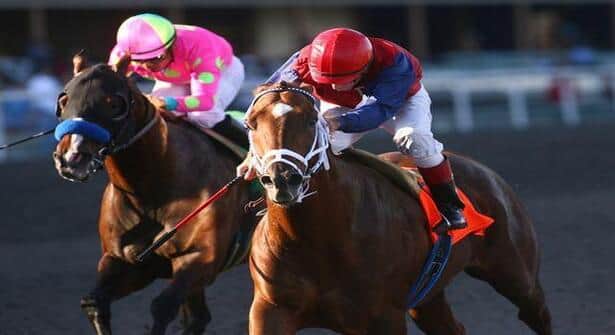 After coming from off the pace to win graded stakes races the first two times Joel Rosario was aboard, Smiling Tiger reverted to the front-running tactics he employed prior to Rosario taking over, blowing away a solid field of sprinters by over three lengths as the 8-to-5 second choice in the seven furlong $250,000 Triple Bend Handicap (Grade I) at Hollywood Park.

“The first time I rode him he stumbled a little bit and the second time he didn’t break that good,” said Rosario of Smiling Tiger’s wins in the San Carlos (Grade II) at Santa Anita and Count Fleet (Grade III) at Oaklawn Park. “He can go close to the pace. He can go to the lead. He can come from behind. He showed me he’s a really good horse.”

By winning his eighth race from 16 career starts while capturing his third Grade I victory, the four-year-old son of Hold That Tiger pushed his career earnings over $1 million.

After making his last six starts on dirt, including a troubled trip in the Churchill Downs (Grade II) in his last when he broke on top with Rosario and was wrangeld off the lead before finishing sixth, Smiling Tiger returned to a synthetic surface and made it a perfect 3-for-3 over Hollywood's Cushion track.

Trainer Jeff Bonde and company indicated after the race that his campaign for champion sprinter of 2011 is likely to make its next stop at Del Mar on July 31 for the Bing Crosby Stakes (Grade I).

Continuing his remarkable run since being claimed for $40,000 by Mike Mitchell four starts back, Camp Victory battled to earn the place at 9-to-1 over 3-to-2 favorite Amazombie.

Despite both favorites being in the mix, the $1 superfecta returned over $592 because 45-to-1 shot Uh Oh Bango ran on for fourth.

Make sure to follow me on Twitter @mdoche for much more and visit www.pick4blog.com for daily selections and analysis!

As a life long horse racing fan and handicapper, it’s an honor to be joining
Horseracingnation.com to share my knowledge and expertise on a daily basis to horse racing fans.
Since the early 1980’s when I visited Santa Anita with my grandfather as a young boy, the track has been in my blood. As soon as I turned 16, I was driving out to the track as much as possible, and with the advent of the self-service machines, was able to wager hassle free.
After graduating from UCLA in 2000, I began my career in sports media as a site manager for Athletesdirect.com and a couple of years later became the Media Relations Coordinator for the Los Angeles Avengers of the Arena Football League.
In the past few years, I have moved my focus to covering the Sport of Kings and have worked in the early hours to better understand morning workouts and putting the pieces of the handicapping puzzle together.
I have also used my journalistic talents to produce video coverage of stakes races in Southern California, as well as interviews with jockeys, trainers, owners and more. I look forward to providing their in-depth insight to you.