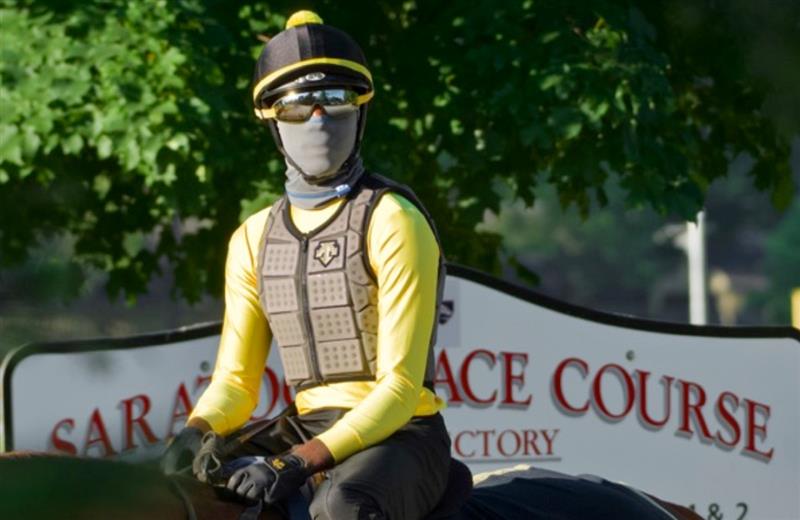 This year’s COVID-19 pandemic has turned operations at racing tracks across the country upside down. With New York State being one of the hardest hit states early in the year and New York City a hot spot in March and April, NYRA had to take extra precautions for its tracks. Belmont opened for racing without public on June 3. Saratoga’s training track, the Oklahoma track, opened about two months later than in prior years, on June 4, for its summer training, also without public access. And the Saratoga meet is slated for its opening day on July 16, again without public access as of now.

While all these restrictions feel hard on the fanbase, they provide a lifeline to horses, riders and trainers. In this photo blog, I’ll try to show that it provides a welcome return to some sort of normalcy.

The new face of the track is masks on all riders and staff:

Social distancing has become the norm, as this pair of Christophe Clement riders demonstrates riding past the gate: 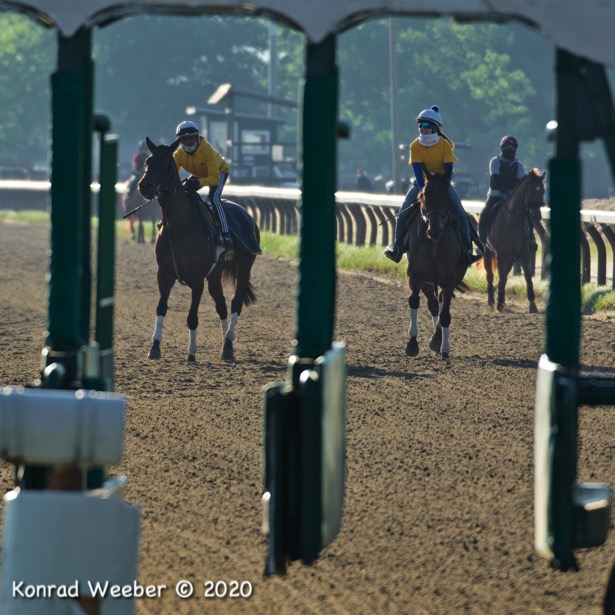 Lorna Chavez, an exercise rider who has ridden at tracks up and down the East Coast for several decades by now, still enjoys her daily work with the horses -- heading toward the track from the barn of trainer Jeremiah Englehart with a smile, enjoying the jog on the track with a colleague, and returning to the barn, mask in place: 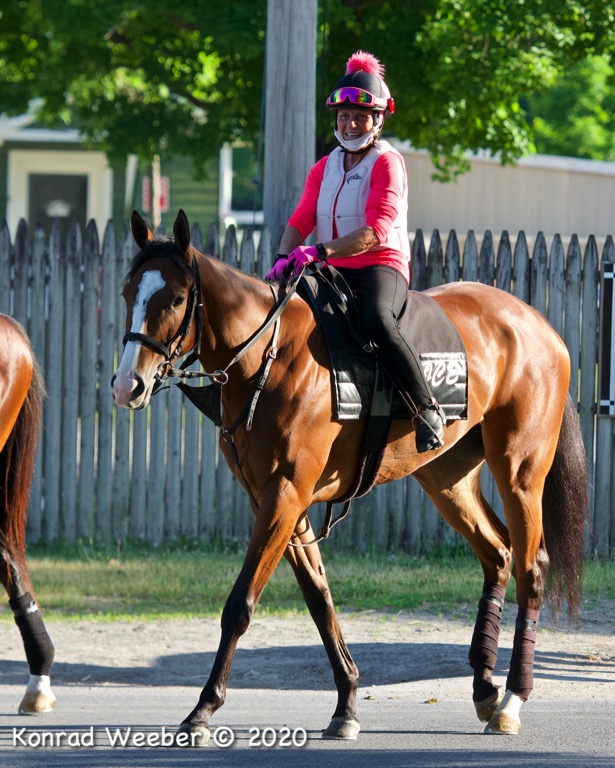 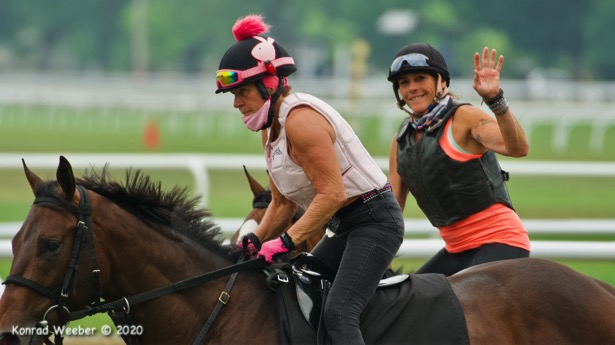 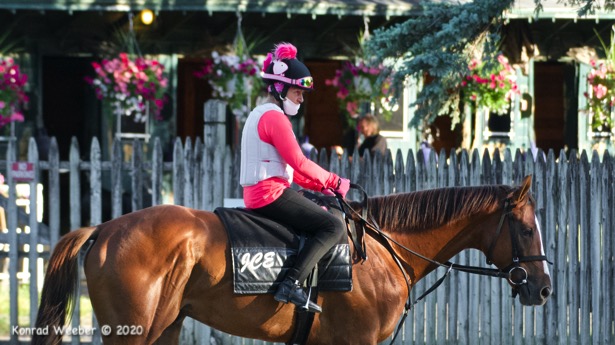 Compared with previous years, the stables in Saratoga are still sparsely filled, but trainer Bill Mott is here with a noticeable contingent of his trainees: 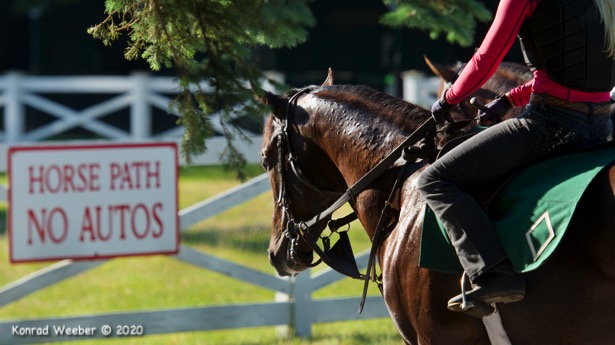 As is the team of Chad Brown. Here, Gian Cueva, one of Chad’s exercise riders, gives me the morning salute before breezing Shelter Island, a 4-year-old filly, on the outside of the turf track: 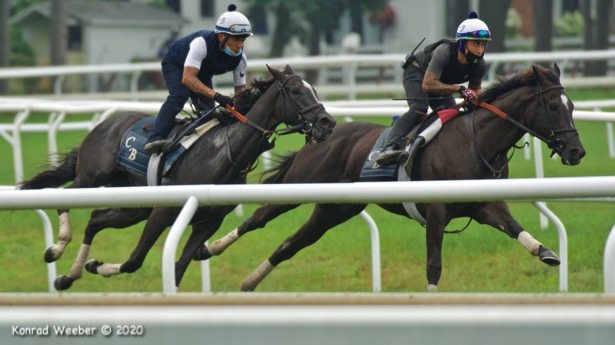 Saratoga residents are adjusting to the Oklahoma track being closed to the public by watching morning workouts through the fences and providing treats to their favorite horses. One special example is Carolyn Karlson, board chair of the Retired Racehorse Project, who provides daily treats to her Noblesque, a 3-year-old unraced filly. Karlson bought Noblesque 2 years ago at the Saratoga yearling sale and sees her every day through the fence at the barn of trainer Jeremiah Englehart:

Noblesque had her first turf breeze this weekend:

I followed her back to the barn to capture her during cooldown and the shower: 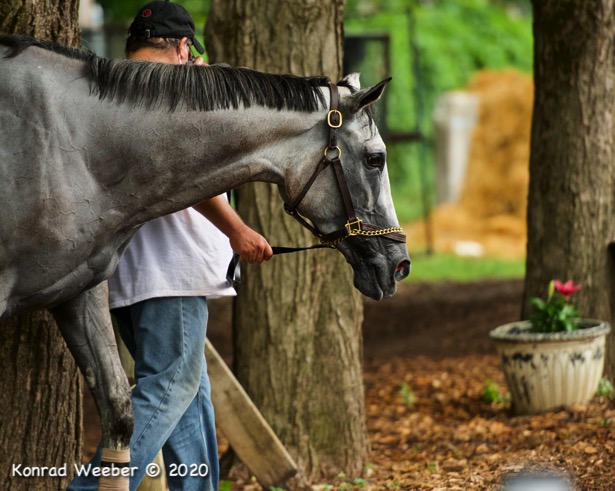 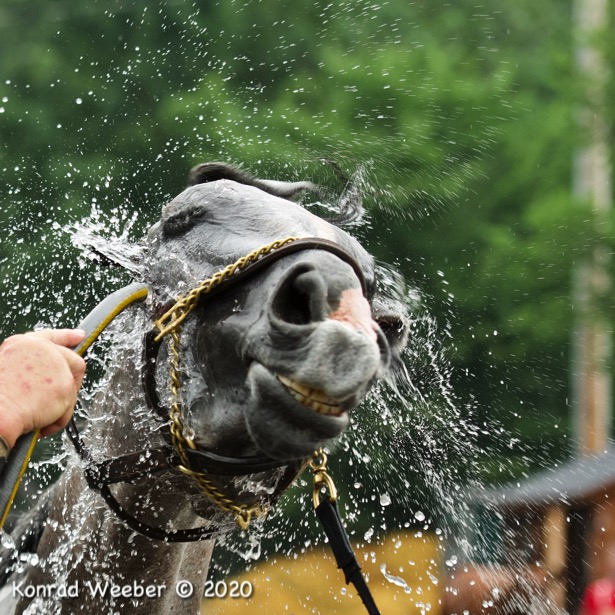 After morning workouts, some horses are true characters when calling for their morning feed:

At the Englehart barn, another unraced filly, 2-year-old Summer Brew, caught my attention during the morning bath. She kept watching me on the outside of the fence throughout the morning bath: 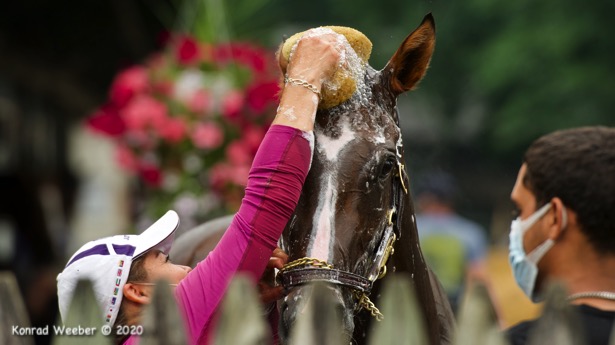 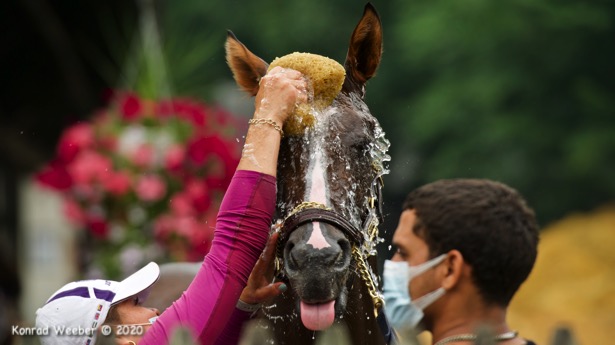 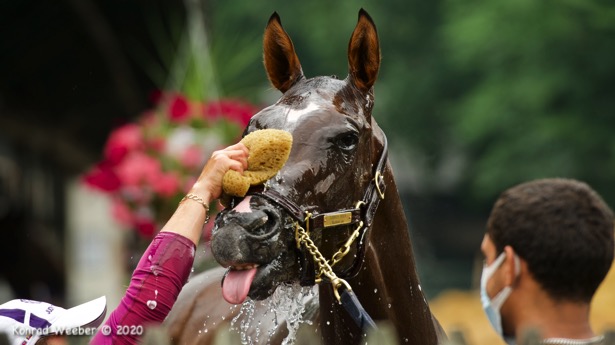 At the moment, the only opportunity to see race horses close up is at barns outside of the NYRA track, such as these James Bond riders returning to their barn after a morning workout:

So, while track operations have slowly started for summer training at Saratoga, we remain hopeful that later this summer the track may reopen to the public as well, in one form or the other.

Meet Konrad Weeber
In his photography, Konrad captures the beauty of equine sports. His photos take the viewers behind the scenes of horse racing and allow them to experience the daily passion at backstretches, training tracks and horse barns. Horse people are motivated by their seemingly limitless dedication to the animals. Konrad aims to capture this in his photos that often explore the changing light between dawn and sunrise. His goal is to photograph the poetry in motion of horses in flight, the intersection of sunlight and athleticism, and the caring passion of riders and caretakers for the equines in their charge.

Konrad is a lifelong photographer who started with black and white photography of modern dance performances for a journal in his hometown of Vienna, Austria. He has followed his passion for photography as he travelled the world and transitioned to travel, outdoors and sports photography. After settling in Saratoga Springs, N.Y., in 2015, he started to explore horse racing photography and picked up horseback riding himself to develop a better appreciation for and connection with horses. He now specializes in equine photography as a freelance photographer.
"  Follow on Instagram for more!