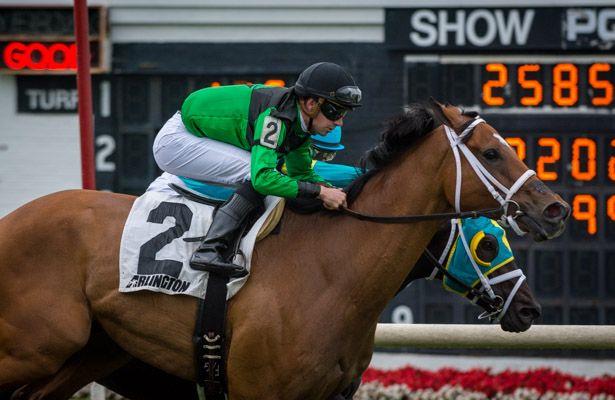 On Saturday, steps from the temporary backside home of 2014 Horse of the Year California Chrome, who returned to America this past Tuesday after a months-long stay in the UK, Arlington Park hosted Million Preview Day. Mother Nature paid no mind to the presence of such a horse on such a day, and rain clouds threatened.

Horses are hosed down after race 3.

Preparations for the National Anthem after race 3.

The first stakes of the day, the Gr. III American Derby, a 1-1/8 mile turf race for three-year-olds, went off just as the first few drops of rain fell. Nun the Less, Florent Geroux up, set a slow early pace, with favored World Approval and Jose Lezcano stalking in third. In the stretch, World Approval took the lead to finish first by a neck over Crittenden, Flavien Prat up, with Nun the Less third. According to Mark Casse, trainer of World Approval, the gelding will be back for the Secretariat Stakes (Gr. I) on August 15. By Northern Afleet and out of Win Approval, World Approval is a half-brother to three millionaires: Za Approval, Miesque's Approval, and Revved Up.

Crittenden receives a pat from his groom in the paddock prior to the American Derby (Gr. III).

(Above & below two) World Approval wins the American Derby.

The connections of the field for the Arlington Handicap (Gr. III), a 1-1/16 mile turf race for three-year-olds and up, likely exhaled with relief upon learning that The Pizza Man, cross-entered in the Stars and Stripes Stakes (Gr. III), scratched from the Arlington H. in favor of the latter stakes. As the rain fell heavily, Julien Leparoux guided the Dynaformer son Quiet Force into a stalking position behind pacesetter Dramedy. Quiet Force took the lead in the stretch and won over Middleburg and James Graham, with favored Up With the Birds (Drayden Dan Dyke up) in third.

Up With the Birds and Drayden Van Dyke in the post parade for the Arlington Handicap (Gr. III).

(Above & below) Quiet Force wins the Arlington Handicap.

Up With the Birds is hosed down after finishing 3rd in the Arlington Handicap.

The rain continued falling heavily for the Modesty Handicap (Gr. III), a 1-3/16 mile turf race--and Beverly D. (Gr. I) prep-- for fillies and mares aged three and up. The favored Gaga A, a With Approval paternal granddaughter bred in Uruguay (and foaled on this writer’s birthday, August 22), is a worldly traveler. She raced in France and South America before moving to the United States for her previous start, the ungraded Possibly Perfect Handicap at Santa Anita, which she won.

Over the soft turf, that worldly mare couldn’t travel quick enough to catch the winner, Walk Close. With James Graham in the irons, Walk Close finished a half length ahead of Mango Diva (Florent Geroux up), with Gaga A in third (Flavien Prat up).

“Had a beautiful trip and followed the pace around there, picked up the spread to home and did it well. The ground is a little soft but she did it the right way. She’s a really nice filly,” said James Graham of his filly’s win.

Riposte in the paddock prior to the Modesty Handicap (Gr. III).

The jockeys arrive to the paddock for the Modesty Handicap.

James Graham receives instructions aboard Walk Close prior to the Modesty Handicap.

(Above & below two) Walk Close wins the Modesty Handicap in a downpour.

The rain finally stopped as the horses walked the paddock for the Stars and Stripes Stakes (Gr. III), a 1-½ mile turf route for three-year-olds and up. Favored The Pizza Man, a six-year-old homebred for Midwest Thoroughbreds, was seeking to repeat a win in the race. The English Channel gelding won the race last year en route to capturing the American St. Leger Stakes on Arlington Million Day.

Tracking a glacial pace set by Roman Approval--whose second dam is Win Approval--and Julien Leparoux, The Pizza Man benefited from a confident ride by regular rider Florent Geroux and moved up from mid-pack to third at the top of the stretch before squeaking out a victory by a short neck over Roman Approval, with Calvados and Jose Lezcano third. The Illinois-bred The Pizza Man now has 14 wins in 22 starts and earnings of just over $900,000.

The Pizza Man in the paddock prior to the Stars and Stripes Stakes (Gr. III). 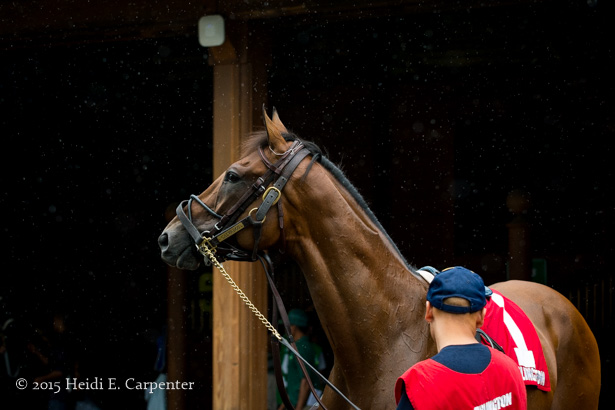 Calvados in the paddock prior to the Stars and Stripes Stakes.

Xtra Luck in the paddock prior to the Stars and Stripes Stakes.

Drayden Van Dyke awaits his mount, lone mare entrant Three Hearts, in the paddock prior to the Stars and Stripes Stakes.

A confident Florent Geroux and The Pizza Man in the paddock prior to the Stars and Stripes Stakes.

Roman Approval sets the pace in the Stars and Stripes Stakes.

(Above & below two) The Pizza Man and Florent Geroux repeat in the Stars and Stripes Stakes. 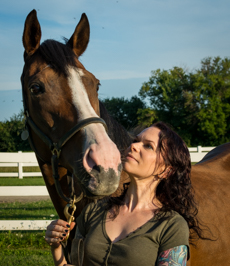