The 2017 Kentucky Derby Trail Begins with the Jerome 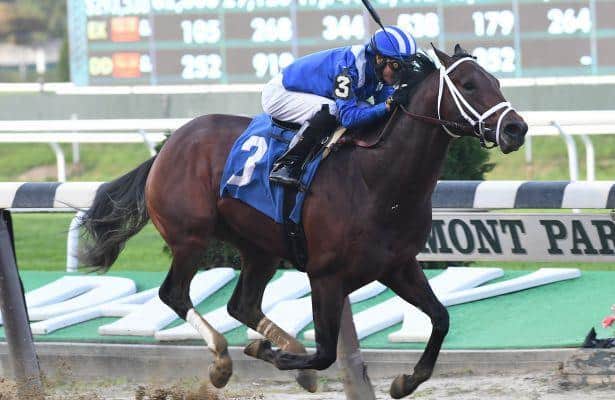 The newly turned three-year-olds will celebrate their birthdays with the first stop on 2017 Kentucky Derby Trail in the $150,000 Jerome (G3). Shadwell Stable’s Takaful is the even money morning line favorite as a field of seven will vie for the 17 Derby qualifying points in this mile and 70 yard contest on the Aqueduct inner track.

The Jerome will be run for the 147th time, which places it as New York’s second most run stakes race behind only the Travers. Contested at four different tracks in its history, in 2011 the Jerome moved to its current January location to kick off the four Derby prep races that are all run at Aqueduct. Since then, the only Jerome winner to make the Run for the Roses was the 2013 victor, Vyjack, who finished 18th in the Derby and is currently having a career upswing while racing in California.

Bonus Points [ML 15-1, Franco, T. Pletcher, 5: 1-1-2, $86,650] This Maryland-bred son of Majestic Warrior is the first of two runners for trainer Todd Pletcher. Bonus Points has had two successful starts on the grass including a third place finish in the Awad at Belmont Park in October. Since then, he rallied to finish second in a state-bred stake at Laurel going seven furlongs on the dirt on December 10. Four top three finishes in five career starts speak to this one’s consistency. Chance for a Check.

Everybodyluvsrudy [ML 8-1, Arroyo, Rodriguez, 5: 1-3-0, $88,500] It took five tries for this son of Union Rags to break his maiden for namesake trainer, Rudy Rodriguez. The good news is that he faced some talented horses in his early races. A promising debut second place finish at Belmont in July prompted the connections to try him in the Hopeful (G1) at Saratoga. That was a lot to ask, but in his next start he ran second to the Mo Town, who would go on to win the Remsen (G2). Everybodyluvsrudy has shown that he can handle the distance. He should be making a late run down the stretch and if the pace is hot he has a chance to upset. Will Be Closing.

Takaful [ML 1-1, J. Ortiz, K. McLaughlin, 2: 1-0-1, $75,000] Sent off as the .85-1 favorite in the Remsen based on his rousting eight-length debut victory at Aqueduct, this Shadwell Stables runner set the fractions but faded to finish third six lengths behind the winner. He was beaten by two promising youngsters in Mo Town and No Dozing. After the Remsen, my initial reaction was that Takaful should not be dismissed. The talented son of Bernardini has a front running style, which is well-suited to the Aqueduct inner track, which has been kind to horses on the lead recently. He will have to deal with the speed of El Areeb, but is inside that one and should be able to get position on the rail. The One to Beat.

True Timber [ML 12-1, Carmouche, McLaughlin, 2: 1-0-0, $37,800] The second runner for trainer Kiaran McLaughlin is a recent maiden winner on the inner track at Aqueduct. The $170,000 yearling purchase for Calumet was a lukewarm favorite when he ran from off the pace to win the six-furlongs in 1:13.12. This son of Mineshaft will need to handle a significant step-up in class if he is going to be a contender. In a Tough Spot.

The Walk [ML 20-1, D. Davis, T. Albertrani, 5: 1-1-1, $80,332] This son of Hansen has run well in three different stakes races at three different tracks since breaking his maiden at Belmont in September. In the Futurity (G3), a bad break and a stumble comprised his chances, but he recorded a second in the Elser Memorial at Parx in his next start. Most recently he was a determined third in the Kings Swan at Aqueduct. All of his starts have been sprinting, so there are distance questions for the West Point Thoroughbreds runner. Distance a Question.

El Areeb [ML 3-1, T. McCarthy, C. Lynch, 4: 2-1-0, $94,200] This Laurel shipper is the leading money winner in the race based on two open length victories while sprinting at that Maryland track. This Cathal Lynch runner is fast and is going to make it very difficult for Takaful on the front end. Most recently he blitzed a decent field of ten in the $100,000 James F. Lewis. The second place horse from that race, Two Charley’s, is running in the contentious Marylander on Saturday. This gray son of Exchange Rate first sold for $100,000 as a yearling at Keeneland and then brought $340,000 as a two-year-old at Ocala in March. He’s a threat to win in New York if he can handle the additional distance. A Threat to Win.

Win With Pride [ML 6-1, I. Ortiz, T. Pletcher, 3: 1-0-1, $52,500] This son of Distorted Humor sold for $450,000 at the Keeneland September Yearling Sale and runs in partnership for the Repole and St. Elias Stables. He broke his maiden at Parx in impressive fashion running the same distance as this race. Most recently he finished only a head behind Takaful in the Remsen at odds of 40-1. Although he finished fourth in the Remsen, he was never really in contention. This Pletcher trainee will have to show more here. Improvement Needed.