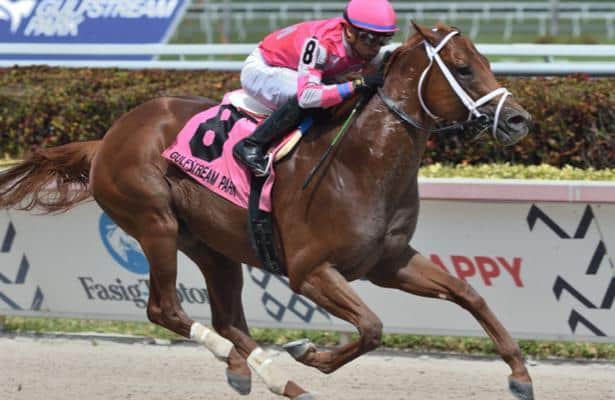 It was a weekend of upsets as three of the highly ranked horses in last week’s polls were beaten. As a result, Vekoma is now in the No. 1 spot in the Aug. 3 NTRA Top Thoroughbred poll. Vekoma, who is perfect in three starts this year, including the Grade 1 Carter Handicap and Met Mile, received 13 No. 1 votes out of 40.

The upsets began at Saratoga, when Midnight Bisou, who had been in the top spot since the second week of March, was beaten in the Personal Ensign (G1) by Vexatious. The two battled down the stretch, but on Saturday, Midnight Bisou was just not good enough. Vexatious was at the top of her game as the winning time was just .17 seconds slower than the time of the Whitney (G1), four races later in the Saratoga card.

As a result, the 5-year-old mare Midnight Bisou dropped from No. 1 with 22 first-place votes to the 5 position while still retaining a single vote for the top spot. Vexatious appeared in the poll for the first time at No. 16.

Last week’s No. 2-ranked Tom’s d’Etat was upset in the Whitney (G1) by Bob Baffert’s Improbable when he stumbled badly at the start and finished third. Improbable won his second Grade 1 of the year to go with his 10-furlong victory in the Gold Cup at Santa Anita.

Interestingly, many voters were willing to accept the poor start as a valid excuse for Tom’s d’Etat as he held steady at No. 2 in the poll while losing four of his No. 2 votes and ending up with six. Improbable made the biggest jump in the rankings, moving from position 15 to the three spot with six No. 1 votes.

The biggest upset of Saturday was probably the second-place finish by Honor A. P. in the Shared Belief at Del Mar. The John Shirreffs trainee was on most Kentucky Derby contenders lists as the second most likely winner of the Run for the Roses. Accordingly, he was sent off as the .20-1 favorite but never looked like a threat to win behind the winner Thousand Words.

In the 3-year-old poll, Honor A. P. lost his single first-place vote from last week, but kept his No. 2 position in that list, although the gap between him and Tiz the Law widened significantly. On the other hand, the Baffert runner Thousand Words moved from No. 18 to No. 6.

The upsets and the changes in this week’s Top Thoroughbred Poll did not weaken my position that Tiz the Law is the top Thoroughbred in the country. I was joined in that view by two other voters, so the top 3-year-old now received three No. 1 votes. Tiz the Law will run in the Travers (G1) this Saturday, and a victory in the Mid-Summer Derby might earn him more votes in the overall poll.

Improbable got his due on my ballot, and I moved him up to No. 2 based on that pair of Grade 1 victories in which one came at the classic distance of a mile and a quarter on the West Coast and then the other against a stacked field at Saratoga in the East.

Vekoma stayed in my No. 3 spot on the strength of his two Grade 1 wins, but with his connections pointing him to the Forego, that will make it hard for him to be a serious candidate for the Horse of the Year title.

I wasn’t willing to completely dismiss the fact that Tom’s d’Etat finished third in the Whitney because, ultimately, it’s what happens on the track that matters the most. Therefore, I dropped him down to No. 4.

Maximum Security needs to do more in his post-Jason Servis campaign before I can move him any higher than his current No. 5 ranking. His comeback win in the San Diego Handicap (G2) was certainly impressive. However, through no fault of his own, Maximum Security still carries that air of uncertainty with him. More victories would certainly clear that up for me.