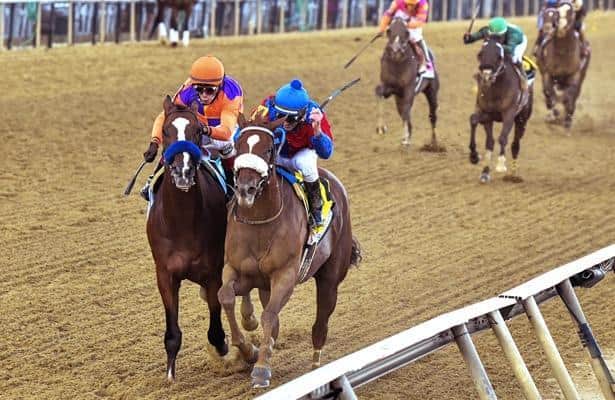 The top trio of 3-year-olds in the most recent NTRA Top 3-Year-Old Poll are the winners of this year’s unique Triple Crown races. When the filly Swiss Skydiver beat the boys in the Preakness on Saturday, she joined Kentucky Derby winner Authentic and Belmont Stakes victor Tiz the Law in the top three.

The three different winners in the pandemic-modified Triple Crown series each received plenty of support from the 43 media members who cast ballots. Authentic got 378 points in the poll on the strength of his Kentucky Derby win and the second in the Preakness. Only nine points behind was Tiz the Law, who won the shortened Belmont Stakes and then placed in the Derby. When Swiss Skydiver became the sixth filly ever to take the Preakness, she jumped up in the poll just another 10 points back, with 359 points.

All three of these sophomores got their fair share of first-place votes, and interestingly they held the top three positions on every ballot except for one, which had Honor A. P. in third and Swiss Skydiver in fourth.

My top three of Authentic, Tiz the Law and Swiss Skydiver agreed with the consensus. Both Authentic and Tiz the Law had a first and a second in the Triple Crown, but the Bob Baffert runner got my top vote based his victory over Barclay Tagg’s horse at Churchill Downs. The filly did knock off Authentic, but decisions had to be made, and since she ran in only the Preakness, she was ranked No. 3 this week.

I won’t argue with the 11 voters who put Kenny McPeek’s filly in the No. 1 position. Her 2020 campaign is worthy of praise with nine starts at nine racetracks and includes five wins while gathering earnings of $1,741,820. There is no doubt that the Preakness victory wrapped up the Eclipse Award for the top 3-Year-Old Filly for Swiss Skydiver.

At this point, the Championship for the 3-Year-Olds is a toss-up between Authentic and Tiz the Law.

So, what’s next for these three? If they run again, it likely will be for the first time against older horses in the Breeders Cup.

Tiz the Law is training for the Breeders’ Cup Classic. The connections of Swiss Skydiver will decide between the Distaff and the Classic. It seems unlikely that Authentic will go in the Classic since Baffert already has Improbable and Maximum Security headed there. However, the Dirt Mile, which will be contested around two turns at Keeneland, might be worth considering for Authentic.

A look at the best Beyer Speed Figures run in 2020 on the main track at a mile or more by horses of all ages shows that the 3-year-olds fit well with the older runners. Tiz the Law and Tom’s d’Etat are on the top with 109. Improbable's 108 and Maximum Security’s 107 are just above the 105 that both Swiss Skydiver and Authentic received in the Preakness.