The Sights and Sounds of the 2012 Belmont Stakes 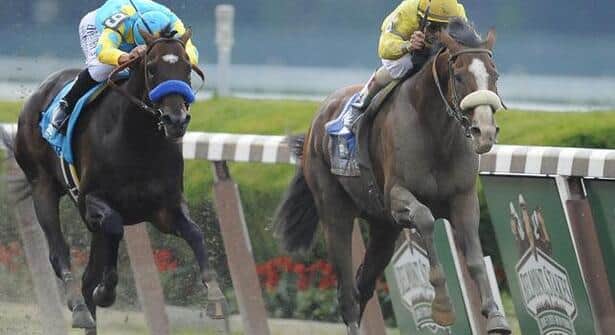 Photo: Eclipse Sportswire
Let’s go back and enjoy the sights sounds of the three weeks between the Preakness and the 2012 Belmont Stakes.  It was quite an important period for horse racing.  Horse racing needed a boost.
On Sunday, May 20, just a day after winning the Preakness I'll Have Another arrived at Belmont Park.  Quietly the media coverage of the Triple Crown contender began and Horse Racing Nation was there to cover the arrival and the first of many Doug O'Neill press conferences.
On Saturday, June 2, I posted a blog, Does Anyone Remember Union Rags?, that generated 29 comments. Our discussion turned out to be right on the mark.

The most common pre-Belmont sight was a mob of reporters surrounding O’Neill. He handled the interviews with poise and a great sense of humor, whether they were scheduled events or impromptu gatherings. The excitement was building for what most felt was going to be a historic race. 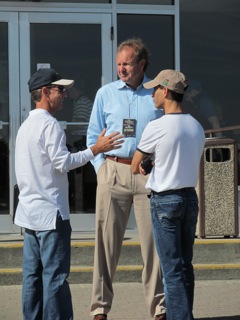 The media poured into Belmont Park.  There were television crews everywhere with many coming from media markets that rarely covered horse racing.  When the spotlight came on the stars came out.  Here Hall of Fame rider Jerry Bailey, NBC’s Bob Neumeier, and Johnny V. hung out on the clubhouse apron as the horses went through their morning workouts.
Union Rags arrived on Wednesday, June 6, just before the 12 noon 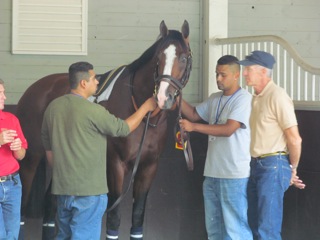 deadline that had been set by the New York State Racing and Wagering Board. The NYSRWB had set up the controversial Belmont Stakes barn. On Thursday Union Rags schooled in the paddock before race 3. After skipping the Preakness, trainer Michael Matz had his horse looking beautiful and he trained just as well the rest of the week.
The excitement of a possible Triple Crown winner was building with each passing day. Beyond the two Belmont turf courses is a display to remind us just how difficult it has been to win the Crown. The signs show the silks of the 11 previous horses that had successfully swept the three classic races. 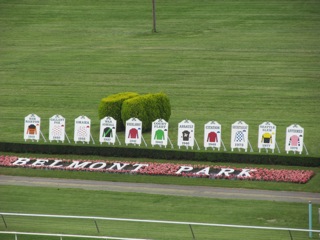 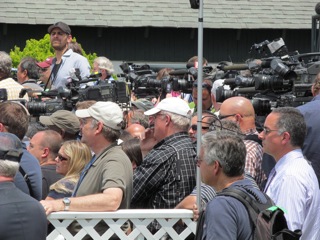 Friday morning was relatively calm. I heard that I’ll Have Another had gone out to train at 5:30am. This immediately raised some questions in my mind. He had gone to the track at the same time every other day and O’Neill had strongly insisted that the horse’s routine would not change.  Then the rumors began and the press box was buzzing about the imminent scratching of the quest for the Triple Crown. The 1:00pm press conference was a media frenzy.

The mood at Belmont had suddenly changed. There would be no Triple Crown winner.  All of the story lines had been altered. Owner Paul Reddam was the first to speak and he announced that I’ll Have Another was going to be retired.  For the first time Doug O’Neill looked drained and he had trouble coming up with words, but there was still going to be a classic horse race the next day. 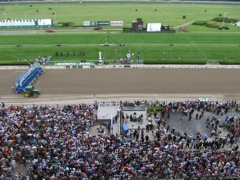 85,811 people came out on Saturday which was the sixth highest in Belmont history. It was the largest non-Triple Crown crowd ever by over 12,000 people and more than 30,000 more than last year’s attendance on Belmont Stakes day. The on-track handle of $13,777, 290 was the second largest in Belmont history for a non-Triple Crown Day. These big numbers clearly showed that I’ll Have Another had generated a great deal of interest in racing. 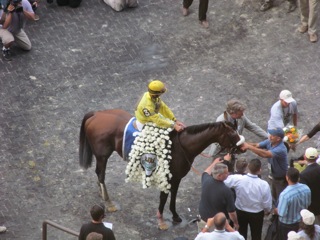 The Belmont turned out to be a day of redemption for the Union Rags team. It turned out to be a day when dreams would come true for owner Phyllis Wyeth.  She said, “I knew. I had a dream. I knew he would make it. And I knew Michael could do it with him. It was my dream and he made it come true today. He and Johnny. I knew he could do it. And nobody would have gotten through on the rail other than Johnny today, I can tell you that. That was unbelievable. He just said ‘Move over, I’m coming.’ He believed in the horse.”
John Velasquez guided Union Rags along the rail and had to wait for an opening as he battled Paynter down the stretch. All it took was one left-handed whip by Mike Smith and Paynter jumped away from the rail allowing Union Rags to get through and rally to the neck victory. Enjoy the NBC video of the race. NBC reported a 13% increase in their audience from last year, which also represented a 74% jump from ABC’s 2010 ratings.