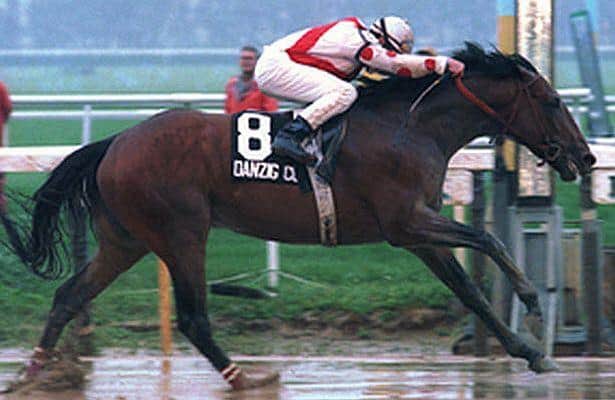 Photo: NYRA / Bob Coglianese
The Triple Crown, racing’s most coveted prize, can only be won at Belmont Park early in June. Eleven times that magical moment has happened and California Chrome hopes to become the 12th.
So much has been written about the colt from California and the Crown, with so much more to come, but there have been other great racing achievements in the Belmont Stakes that did not involve a bid for the Triple Crown.
Let us go back to 1982, 1983, 1984, 1985, and 1986; back to Conquistador Cielo, Caveat, Swale, Creme Fraiche, and Danzig Connection, and back to the Hall of Fame trainer, Woody Stephens. Those are the five consecutive Belmont Stakes victories that Stephens strung together.
It has been 36 years since the last Triple Crown and it has been 28 years since Woody’s Belmont Stakes win streak. There is no doubt in my mind that we will get another Triple Crown winner, maybe in a matter of days, but I don’t think any trainer will ever duplicate what Stephens did in the mid-1980’s.
The win streak began on a very sloppy track in 1982, with a horse owned by Henry deKwiatkowski.  Conquistador Cielo would beat a field of 11 in the Belmont by 14 lengths. Most amazing, by today’s standards, is that the horse had won the Metropolitan Mile a mere five days earlier, on Memorial Day, by over seven lengths in 1:33. Without missing a beat Conquistador Cielo would continue to win in the Dwyer and the Jim Dandy and be named Horse of the Year.
Next, it was Caveat in 1983, for August Belmont IV, another one of racing’s illustrious owners. Caveat won the Derby Trial, six days later finished third in the Kentucky Derby, and then beat a field of 15 in the Belmont.
In 1984, the owner was Claiborne Farm with its solid yellow silks and its trademark one-syllable horse names. Swale won the Florida Derby, Kentucky Derby, and the Belmont. The colt tragically and mysteriously died eight days after the Belmont. Swale would later be named the Champion Three-Year-Old Male.
Creme Fraiche would be Woody’s fourth Belmont in a row, this time for Brushwood Stables. Creme Fraiche would become the first gelding to win the Belmont Stakes. In his career, he would end up winning 17 races and over $4,000,000.
Stephens’ fifth Belmont victory came the way it all began, with a horse owned by deKwiatkowski, Danzig Connection in 1985. Danzig Connection was a home-bred by deKwiatkowski’s prized stallion, Danzig.  In this Belmont he defeated a field, which included future champion, Ferdinand.

Stephens could get his horses to do things that today’s thoroughbreds no longer even attempt. His Hall of Fame career included two victories in the Kentucky Derby, one Preakness, and he trained nine champions. Woody Stephens did not win the Triple Crown, however he did win the Belmont Stakes five years in a row, something that no other trainer has ever done.

Horses to Watch: 9 horses that are worthy of added attention
In this biweekly series, racing analyst Keeler Joh...