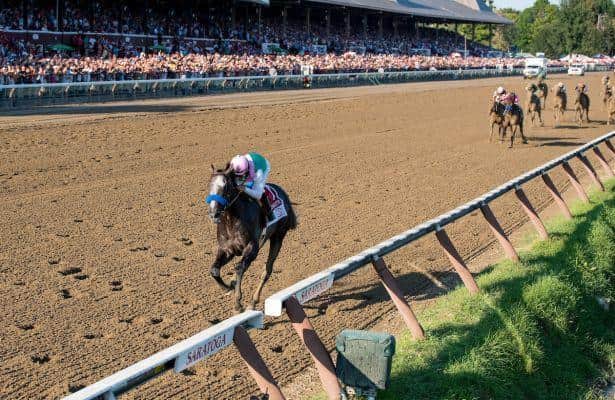 Here are the winners of the fourth annual AndyScoggin Awards, which

are given to recognize the best performances and performers in graded stakes races at Aqueduct, Belmont Park, and Saratoga. The Scoggys are New York racing’s equivalent to the Eclipse Awards. To be considered for an AndyScoggin Award a horse has to have won at least one graded stakes race at a NYRA track in 2016. Thus, superstars like Tepin and California Chrome are not eligible for an AndyScoggin Award. They will have to settle for a chance to bring home an Eclipse Award.

The AndyScoggin Awards Committee carefully studied all 109 (37 grade one's, 32 grade two's, and 40 grade three's) of the graded stakes that were run in New York. So without further ado, the winners of the Scoggys are …

Practical Joke had a very impressive two-year-old campaign that included wins in the two most important grade ones in this division in New York, the Hopeful and the Champagne. In the Hopeful the early Kentucky Derby favorite, Classic Empire, wheeled out of the gate and tried to take rider Irad Ortiz back to the Casse barn on the Saratoga backstretch. In the Breeders’ Cup Juvenile, Practical Joke finished third after being jostled out of the gate and was beaten by the two most highly regarded two-year-olds in Classic Empire and Not This Time, neither of whom qualify for this award.

Nationally, there is no real standout in this division and the same holds true in New York. The Breeders’ Cup winner, Champagne Room, is west coast based and several other dirt horses won the important stakes in New York. Of them, Sweet Loretta won her first three races including the thrilling dead heat finish in the Spinaway, but in the Breeders’ Cup she was a disappointing eleventh. Thus, the Scoggy will go to New Money Honey, who went from a victory in the Miss Grillo at Belmont Park to win the BC Juvenile Fillies Turf. A turf horse winning a juvenile award is not unprecedented for these awards as Lady Eli did the same thing in 2014. Thus, trainer Chad Brown has swept both of the Scoggys for the two-year-olds.

For the first time in the history of the AndyScoggin Awards, the Belmont Stakes winner is not going to take home the Scoggy. Creator won the third jewel of the Triple Crown series, but finished third in the voting in this division, which was lead by two late developing horses that did not run in those three Classics. On the power of his record setting Travers performance alone, the top sophomore is Arrogate. His win in the Breeders’ Cup Classic was just icing on the cake. Connect, who won the Cigar Mile against older horses, was a distinguished second in the voting.

What a treat it was to have the great Songbird spend the summer at Saratoga. There just are not enough superlative adjectives to describe this daughter of Medaglia d’Oro. New York racing fans got to see her register decisive victories in the Coaching Club American Oaks and the Alabama at the Spa. Those counted as wins number nine and ten in her phenomenal career starting unbeaten streak.

Frosted’s devasting performance in the Met Mile earned a 123 Beyer Speed Figure, which was the highest number of the year in not just New York, but the entire country. The 14¼ length margin of victory went hand in hand with the speed figure. The son of Tapit followed up the Met Mile with a win in the Whitney at Saratoga, giving him victories in two of the most important races in the division.

What a year this Stonestreet runner had with consecutive wins in the Ruffian, Ogden Phipps, and Personal Ensign. It was too bad that she was not able to run in the star-studded Breeders’ Cup Distaff with the talented west coast members of this division. With a win as a top Older Dirt horse, Cavorting joins her Kiaran McLaughlin stablemate, Frosted, as an AndyScoggin Award winner.

This was an easy decision for the committee as Flintshire dominated the division with impressive victories in the Manhattan, Bowling Green, and the Sword Dancer. New York racing fans came to expect this Chad Brown runner to weave through traffic and employ an explosive turn of foot to find the winner’s circle. A soft turf course in the Turf Classic and Highland Reel in the Breeders’ Cup Turf led to a couple of second place finishes to end the year.

Tepin and Miss Temple City both spent the summer at Saratoga, but neither of them won a race on the New York tracks, thus the feel good comeback story of the year will allow Lady Eli to become the first horse to win three AndyScoggin Awards. Her victory over laminitis was made complete with her win in the Flower Bowl at Belmont Park. Lady Eli lost the Breeders’ Cup Filly and Mare Turf by the narrowest of margins. Trainer Chad Brown also swept both of the AndyScoggin Turf Awards.

Drefong followed in the footsteps of his Bob Baffert stablemate, Arrogate, when he followed a big win at Saratoga with a victory in the Breeders’ Cup. For Drefong it was a 3¼ length win in the King’s Bishop that prepped him for his title in the Breeders’ Cup Sprint. For 2016 this son of Gio Ponti ended the year with a perfect 4 for 4 record.

Haveyougoneaway had a splendid year in 2016 with five wins in eight starts, but it was her victories in the Honorable Miss and the Ballerina at Saratoga that gave trainer Tom Morley his very first graded stakes wins. This division was wide open around the country for most of the year and this New York-bred has earned the Scoggy regardless of her seventh place finish in the Breeders’ Cup Sprint.

Horse of the Year – Arrogate

Arrogate’s win in the Travers may have been enough to give him the Horse of the Year Scoggy, but his convincing victory in the Breeders’ Cup Classic over California Chrome left little doubt that this son of Unbridled’s Song was the best horse to run in New York in 2016.

Chad Brown is the winner of his second Scoggy as Top Trainer to go with his award from 2014. Brown trained horses won four of the ten AndySsoggin Awards in 2016. For the first time this year Brown was able to wrestle the prestigious Saratoga trainer title from Todd Pletcher for the first time with a record setting total of 39 victories. With just a couple of weeks left in the year, Brown leads all trainers in North America with over $23 million in earnings.

Jose Ortiz bested Javier Castellano to win his first AndyScoggin Award as the Top Jockey in New York. It has been a fantastic year for the 23-year-old rider who won his first Saratoga Jockey title with 65 wins, which followed his title in the Belmont Park Spring/Summer meeting. This year Ortiz won 19 graded stakes on the NYRA tracks including the grade one Mother Goose, Hopeful, and Turf Classic. He got his career first Breeders’ Cup victory in the Juvenile Turf and appears to be on his way to winning the most races in North America.