Texas Red is a Winner in the Jim Dandy (G2) 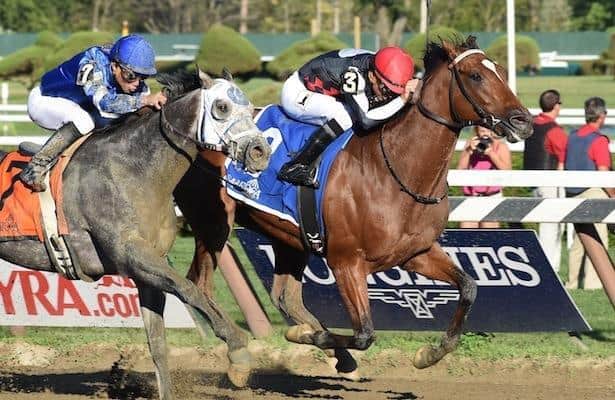 A small but select field of four gathered for the $600,000 Jim Dandy (G2) at Saratoga. With his victory, Texas Red made claim to be the second best three-year-old in the country behind the Triple Crown winner, American Pharoah.

With four major stakes for the three-year-olds in the Northeast this weekend, the Jim Dandy could only attract the Belmont Stakes runner-up Frosted, last year’s Breeders’ Cup Juvenile winner Texas Red, Easy Goer victor Japan, and Frammento from the barn of Nick Zito.

Trained by Keith Desormeaux and ridden by his brother Kent Desormeaux, Texas Red completed his comeback after two second place finishes in 2015. Following the San Vicente (G2) at Santa Anita in Febrauary, Texas Red developed a foot abscess and lost all chance to qualify for the Kentucky Derby. In July at Belmont he was defeated in the Dwyer (G3) by the very speedy undefeated colt Speightster.

However in the Jim Dandy, the son of Afleet Alex who was a bargain yearling purchase for $17,000, established himself as a favorite for the August 29th Travers Stakes (G1), the Midsummer Derby at Saratoga.

As the Jim Dandy began, Japan became the pacesetter jumping out to a quick two-length lead over Texas Red and Frosted. Japan was able to maintain that margin over the first six furlongs through early fractions of 24.37, 48.15, and 1:11.92.

Heading to the clubhouse turn, Kent Desormeaux was able to get the jump on Joel Rosario and Frosted as they sprinted after Japan. Coming out of the turn Texas Red’s momentum pushed him a bit wide as he drew even with the leader. After the mile went in 1:36.15, Frosted began to make up ground down the middle of the stretch, but Texas Red had enough left to hold off Frosted and record a half-length victory at the wire.

Kent described the ride on Texas Red, "He just galloped along to the quarter pole. I had so much left that I got to the [front] quicker than I thought I would. He kind of idled on the lead a little bit that last three sixteenths of a mile, but when challenged he had tons left. The most encouraging thing about the entire ride was the energy left galloping out. I think I'm sucking more wind than he is from the race."

Frosted's trainer Kiaran McLaughlin talked Travers, "We got beat. Frosted ran very well, a nice horse won it. We gave the winner four pounds. We came to win the race but we couldn't get by. Four-horse races are always tricky, but it will be a different race in four weeks. You just don't know what's going to happen, he ran well, but hopefully he will be better in four weeks [Grade 1, $1.25 million Travers, August 29]."

In the end Japan finished third and Frammento was never in contention, running in fourth and last position through the entire mile and an eighth.

Kent D. feels Texas Red is also well-suited to the Travers, "I think he can only improve. He's a huge-striding, real-estate loving kind of horse. He loves two turns and the further they get to do something like that I think the more of him. His true superior athletic ability to get a mile and a half and a mile and a quarter is what he is best at."