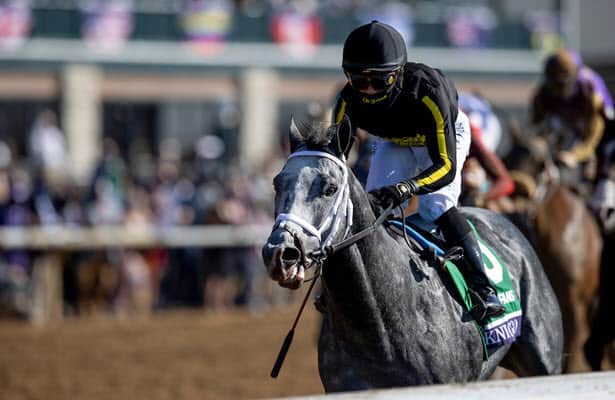 The weekly NTRA Top Thoroughbred Poll made its 2021 debut with the 5-year-old Knicks Go in the top spot after receiving 27 of the 35 No.1 votes.

The first poll leader of the year typically is the winner of the Pegasus World Cup (G1) and this year is no different. Knicks Go dominated the race at Gulfstream Park, which to date is the only Grade 1 race to be run on a dirt surface in 2021, with a 2 ¾ length front-end victory.

The gray son of Paynter picked up where he left off last year extending his winning streak to four starts, all which have come since joining the barn of Eclipse Award winning trainer Brad Cox.

In the consensus top 10, voters showed preference for champions from last year that have not made their first start of 2021 but are expected back on the track in the coming months.

The champion older dirt female Monomoy Girl, who sold for $9.5 million following her Breeders’ Cup Distaff win, is expected to debut for Cox during the Oaklawn Park meeting. Her stellar career record of 13 wins in 15 starts got the daughter of Tapizar three No. 1 votes in the poll identifying her as a serious contender for the Horse of the Year.

In the No. 6 position is Swiss Skydiver, the 3-year-old filly champion. The top female sprinter Gamine was voted into the eighth spot. The champion male turf horse Channel Maker is No. 9 and the top male sprinter Whitmore completed the top 10.

The upcoming Saudi Cup on Saturday looms as a race that will impact next week’s poll as five American horses, that received votes in the current poll, are likely to run in the rich race. Knicks Go and No. 2 Charlatan, who are expected to be the favorites in the $20 million race, will be joined by No. 7 Jesus’ Team who was second in the Pegasus. Tacitus, Sleepy Eyes Todd, and Max Player received votes but were outside of the top 10.