Shifman: Why Tiz the Law tops this voter's NTRA ballot 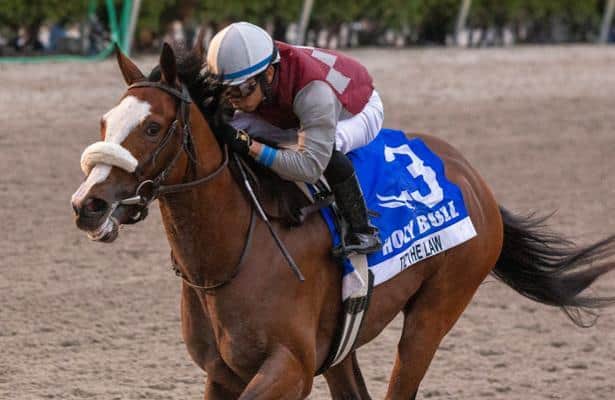 Even without an important race in the division, the sophomores stayed in the national spotlight over the last week when NTRA Top 3-Year-Old Poll leader Nadal sustained an injury that's likely to send him to retirement and a career at stud. As a result, Tiz the Law is back on top of the rankings.

Tiz the Law received 27 of the 35 first-place votes cast this week. However, the voters were unsure how to handle Nadal. Overall, he dropped down to the No. 7 spot. But while five people ranked him No. 1, others removed him from their top 10 altogether.

To me, Nadal’s 2020 campaign -- a 4-for-4 record with three graded wins -- deserves recognition. I placed him fifth given the horses that are still active ahead of him have a chance to make a significant impact on the new Kentucky Derby trail and in the Triple Crown races.

In addition to shifting Tiz the Law back to the top spot in the 3-year-old rankings, I placed him No. 1 in the NTRA Top Thoroughbred Poll as well.

Feeling that no older horse has yet to make a strong claim for first, I deferred to the winner of both the Holy Bull (G3) and Florida Derby (G1). Others are likely to follow if Tiz the Law prevails in the June 20 Belmont Stakes.

This weekend, Grade 1 racing resumes in earnest with the Santa Anita Derby (G1) and Hollywood Gold Cup (G1), along with the Santa Anita Oaks (G2). Ranked horses such as Honor A. P., Authentic and Swiss Skydiver are all expected to run in the 3-year-old events, while the Gold Cup could influence the Top Thoroughbred Poll depending upon which older horse prevails going 1 1/4 miles; last year, the race produced eventual champion Vino Rosso.

At Belmont Park, turf stars Rushing Fall and Got Stormy are set to face off on opening Wednesday in the Beaugay (G3). The first Grade 1 race of the year in New York will then run on Saturday with the Carter (G1) featuring Mind Control, Firenze Fire, Vekoma and Performer, among others, while the 4-year-old Code of Honor makes his 2020 debut in the Westchester (G3).