Shifman: Sistercharlie right back to form, among Top 10 best 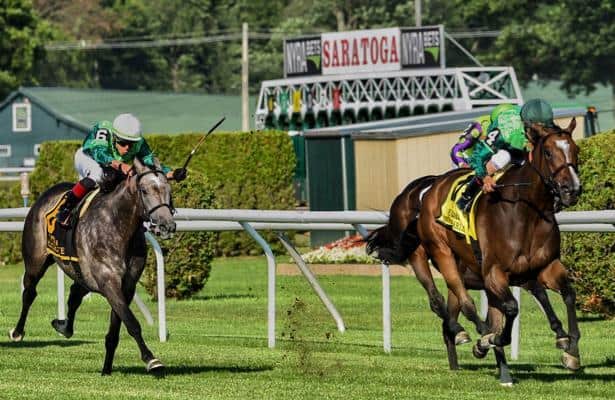 The reigning Champion Turf Female Sistercharlie unleashed her usual devastating turn of foot down the stretch in the Diana (G1) at Saratoga to make her 2019 debut a winning one, even when she had every right to come back a bit short after an eight-month layoff.

Sistercharlie’s highly rated opponents from Chad Brown’s barn -- Rushing Fall and Homerique -- had a combined record in North America of 11: 10-1-0 coming into the Diana. Those two were in top form and unbeaten having already piled up two graded stakes victories each this year.

Thais was the fourth runner from Brown’s barn who provided a fast pace along with the pressure from Mitchell Road, a filly riding a four-race winning streak for Bill Mott. When the pace collapsed, Rushing Fall was right there to take over the lead, but she was no match for the big move from Sistercharlie, who drew off to an almost two-length victory and earned a career-high Beyer Speed Figure of 105.

Off her Diana performance where Sistercharlie was victorious in her 2019 debut in a Grade 1, she moved back into the NTRA Top Thoroughbred Poll at No. 6 and on my ballot in fourth.

Let me digress for a moment to address some of the annoying pre-race chatter criticizing the Diana because of its six-horse field. To those supposed racing fans who think that the only criterion for a good race is a large field, I suggest that they just cruise around their ADW's betting menu all day long to make sure that they never have to play anything but 12-horse fields. It is clear that you only care about the gambling and that you have no real interest in the horses.

The Diana had a stellar field loaded with graded stakes winners and million-dollar earners. It didn't matter that the top three finishers came from Chad Brown's barn. And I actually consider that a positive, because on that day he had the best horses, and none of them were holding anything back.

Back to last weekend’s racing: Mr. Money continued his ascent in the 3-year-old division when he made the Indiana Derby (G3) his third graded stakes victory in a row. His winning streak and latest score, which came with a 99 Beyer Speed Figure, prompted me to put a member of sophomore division back in the Top 10 at number seven.

This weekend at Monmouth Park, the Haskell Invitational (G1) will feature the rematch between Maximum Security and King for a Day with the results likely to have an impact on next week’s rankings.

Also, in a bit of surprise, No. 3-ranked Midnight Bisou is expected to make her next start on the Haskell undercard in the Molly Pitcher (G3). Hall of Famer Steve Asmussen is using the race to prep for the Personal Ensign (G1) at Saratoga later in the summer.