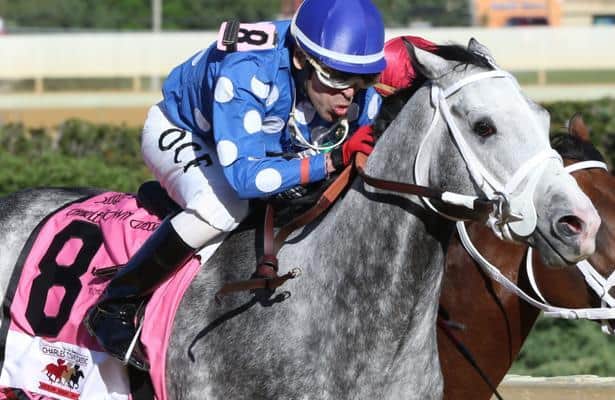 With American stakes racing in a pre-Triple Crown lull, there was little movement in the latest NTRA Top Thoroughbred Poll. And in a spot that could have led to changes -- featured over the weekend was the  Charles Town Classic (G2) -- the West Virginia-bred

The 9-1 upset victory further emphasizes the weakness of the Older Male division at this point in the year. The field that showed up to race for a $1 million purse came with a combined record of three wins in 15 starts this year, and one of those victories came from Runnin’toluvya's local stakes score. Three of the starters were making their 2019 debuts in this race.

It was the first-time that a state-bred won Charles Town's signature race. Runnin’toluvya came into it on an eight-race streak including 10 victories in his last 11 starts at distances from 6 1/2 furlongs to a mile and an eighth, all at his home track. Coming in, the gelding had never registered a Beyer Speed Figure above 89.

After the race, winning trainer Tim Grams said, “I’m just lucky to own a horse like this who steps up and seems to always do what we ask him to. We’ve put a lot of challenges on him, but he’s stepped up and really surprised us.”

Runnin’toluvya certainly did step up with this graded stakes victory and earned a 100 Beyer.

The 5-2 favorite was Rally Cry, from the barn of Todd Pletcher, who came to town having last run fourth in the Woodward (G1). His last win was way back in 2017 in the restricted Alydar at Saratoga. He finished a non-threatening fourth.

Some did not agree with my choice of Omaha Beach as the No. 1 horse in my Top 10 last week, but what happened in the Charles Town Classic only strengthens my belief that right now the best American horses running are the 3-year-olds.

Possibly, a horse like Catholic Boy will emerge and do great things as an older horse. And, yes, the sprint division has come out strong with four or five different horses running big. But that is not one of the headline divisions that will vie for Horse of the Year.

Top 10 action will heat up shortly with the opening of Churchill Downs and big names are expected to be in action: unbeaten Bulletin in the William Walker; McKinzie in the Alysheba (G2); Newspaperofrecord in the Edgewood (G3); World of Trouble in the Turf Sprint (G3); and the Turf Classic (G1) will feature Bricks and Mortar.