Shifman: Tiz the Law's my top 3-year-old, but who else belongs? 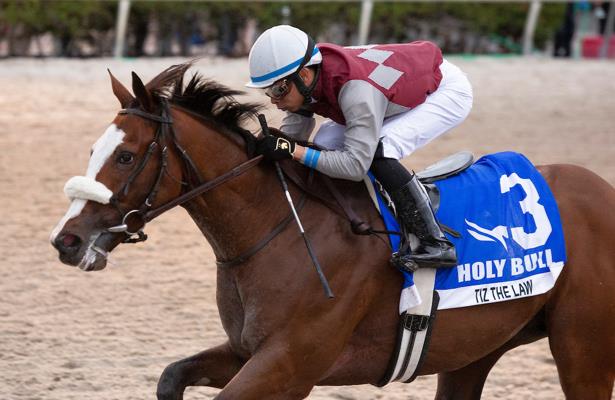 The NTRA Top Three-Year-Old Poll debuted this week with Tiz the Law leading the ranking of all sophomore horses, receiving 17 of 28 first-place votes.

Following was a trio of Bob Baffert 3-year-olds: Thousand Words, Nadal, and Authentic. Each have won a graded stakes and likewise received No. 1 votes.

Still, the poll had a wide-open feeling for this voter. Seven horses received votes for the top spot, among them Dennis’ Moment and Maxfield, neither of whom have raced yet this year.

For me, Tiz the Law received a definitive No. 1 vote. The uncertainty came after that given I slotted Dennis’ Moment and Maxfield in the next two spots and then included the Breeders' Cup Juvenile Turf winner Structor at No. 8.

Dennis’ Moment is expected to make his season debut in the Fountain of Youth (G2) on Feb. 29 along with Structor, who is 3-for-3 on the lawn but shows four strong breezes on dirt this year for trainer Chad Brown. The unbeaten Maxfield recorded his first official workout on Monday and has backers newly encouraged about his chances of getting to the Derby having been sidelined last November for bone chip surgery.

To me, Tiz the Law is clearly a horse who has the speed and stamina that is required to win the Kentucky Derby. I'll need to see more from other horses that have run since the new year. That includes the late-running Sam F. Davis Stakes (G3) winner Sole Volante, the Southwest Stakes (G3) runner-up Wells Bayou and the recent Tampa Bay Downs allowance winner Gouverneur Morris.

With a convincing three-length victory in his 2020 debut in the Holy Bull (G3), Tiz The Law rekindled the Kentucky Derby dreams of Sackatoga Stables, which won the 2003 Run for the Roses with Funny Cide. They were both purchased at the Saratoga New York preferred yearling sale; Funny Cide sold for $22,000 and Tiz the Law for $110,000.

Tiz the Law is expected to make his next start in the Florida Derby (G1) on March 28 when he can check the most important box for a Kentucky Derby winner. Since the qualifying points era began in 2013, every Derby winner (that includes Maximum Security, first across the wire in 2019) was victorious in one of the seven 100-point prep races.

In addition to topping the 3-year-old poll, Tiz the Law is the current 6-1 favorite in the William Hill U.S. Kentucky Derby futures. He was the top individual betting choice in the Kentucky Derby Future Wager Pool 1 at 11-1 and was co-favorite in Pool 2 at 8-1.

Here's a first look at my thinking with the sophomores compared to the consensus votes assembled from eligible writers and broadcasters: