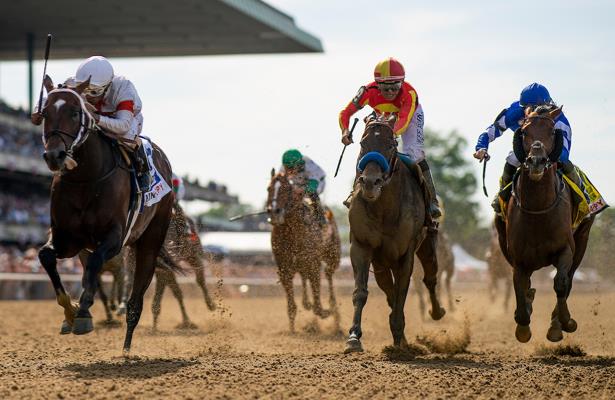 The 2019 Belmont Racing Festival turned out to be an amazing showcase for thoroughbred racing with a long list of outstanding performances. None, however, was better than Mitole’s victory in the Met Mile (G1).

The Met Mile, loaded with Grade 1 winners and millionaires, was bound to have significant impact in the NTRA Top Thoroughbred Poll. So when Mitole extended his winning streak to six races, which includes all four of his starts this season, he jumped to the top of my Top 10 and came in second in the consensus list with eight first-place votes.

Bricks and Mortar extended his run of consecutive victories to five with three of those Grade 1 wins, most recently taking Saturday's Manhattan (G1). The Chad Brown runner looked like a winner every step of the way. He had been my No. 1 horse, but when Mitole won the Met Mile, and with the NTRA rankings a snapshot of the Horse of the Year race, I had to take into account how rare it is for a turf runner to earn that over a top dirt male.

That is what pushed my vote to the Met Mile winner.

McKinzie dropped down my rankings after he notched his third second-place finish of the year. In the Met Mile, he broke to the back of the field, and jockey Mike Smith was content to take his time with the California star. However, in doing that he was committed to racing on the inside. Smith had to bide his time, probably steadied McKinzie twice, and after finally getting an opening he surged to get pass Thunder Snow for second.

Even with the less than ideal trip I don’t know if McKinzie would have beaten Mitole at the distance. The work trainer Steve Asmussen has done with Mitole is noteworthy, as he used two Grade 1 races to stretch out the son of Eskendereya from six furlongs to seven and then to the mile, seemingly with ease.

The list of amazing performances on Belmont day also included Midnight Bisou’s spectacular turn of foot to win the Ogden Phipps (G1), extending her streak to four wins. Her dominance of the Older Female division moved her to No. 3 in the poll. She also garnered two top votes.

The separate poll for 3-year-olds ended this week with the conclusion of the Triple Crown Series. Beginning next week, if voters want to recognize a 3-year-old, they have to do so in the Top Thoroughbred Poll. I have been including my top 3-year-old in the full poll all year long. In this final list for sophomores, I continued to put Maximum Security in the top spot and at No. 7 in my overall list.

This was a unique Triple Crown series that produced, you could argue, four winners. Maximum Security crossed the finish line in first in the Derby before Country House was awarded the victory. Trainer Mark Casse took the Preakness with War of Will and the Belmont Stakes with Sir Winston.

Here's how it all shakes out at the midpoint of the season: