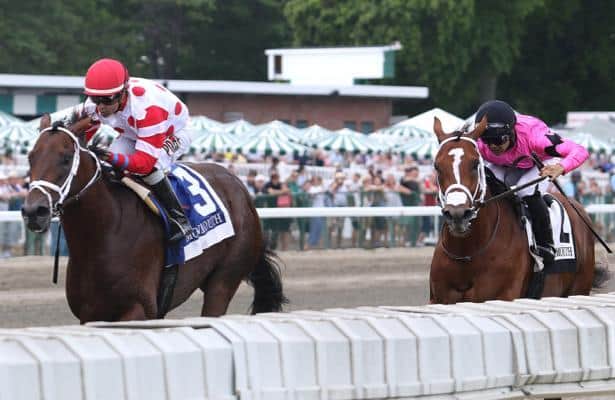 Over the weekend, the revolving door to the winner’s circle at the major races continued to turn when Maximum Security was upset in the Pegasus at Monmouth Park and Gift Box was defeated in the Stephen Foster (G2) at Churchill Downs.

It has not been easy voting in the NTRA Top 10 Thoroughbred poll this year. There has been no consistent leadership in the spotlight divisions for the older males and the 3-year-olds all year, and those are where most Horse of the Year winners run.

Maximum Security, the disqualified Kentucky Derby winner, went to the post at odds of 1-20 in his first start since the first Saturday in May. He was the clear-cut leader of the final 3-year-old poll that came as the Triple Crown series concluded.

The Jason Servis trainee stumbled a bit leaving the starting gate and then quickly faced a challenge on the front end from the eventual winner King for a Day. Rider Luis Saez was working hard around the final turn on Maximum Security, but it was the Todd Pletcher trainee that was best coming down the stretch.

“He hasn’t run for a while, so he was a little desperate in the gate. He wanted to break so he broke so fast he stumbled,” said Saez. “He was all right after that, but I sensed he was getting a little tired. I’m not disappointed. Definitely not. He will be okay. I think he needed the race. This is horse racing. Anything can happen. He’s a real good horse. That hasn’t changed. I think the next time he will be okay.”

Maximum Security was my top 3-year-old and held a spot in my overall Top 10 ballot for the NTRA rankings. But with his defeat, there is no longer an obvious division leader. For the first time this year, there is no sophomore in my Top 10.

At Churchill Downs, Gift Box was the 2-1 favorite in the Stephen Foster (G2) as he shipped from California to lead a field of 12. He was never a serious contender in the race as Seeking the Soul won a battle down the stretch with Quip and Tom’s d’Etat.

As a result, Seeking the Soul joined my Top 10 for the first time this year at the No. 6 position.