Shifman: Charlatan is No. 1 in NTRA poll after Saudi Cup 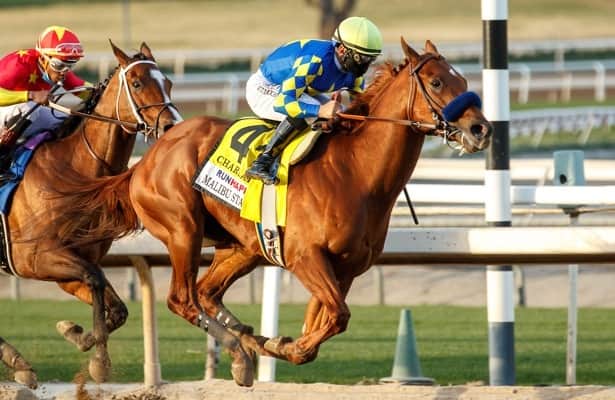 After Charlatan finished second and Knicks Go ran fourth in the $20 million Saudi Cup, those two swapped positions in weekly NTRA Top Thoroughbred Poll. Charlatan garnered 25 first-place votes, up from four last week, and Knicks Go lost all but one of the 27 votes he got in the first week of the rankings.

While the American favorites Charlatan and Knicks Go battled on the front end from the start, eventual upset winner Mishriff used a late rally down the long stretch to get the victory.

Mike Smith sent Charlatan right to the lead from his outside post position while Joel Rosario decided to position Knicks Go a bit behind the front runner. The duel continued through the long backstretch, around the one turn, and down the grueling stretch of the nine furlongs.

Charlatan was valiant to win the battle against Knicks Go, but he could not hold off Mishriff who benefitted from the long duel between the Americans.

Charlatan picked up $3.5 million for running second and earned the praise of his Hall of Fame trainer Bob Baffert.

“He ran a big race,” Baffert said on SUnday. “He put away Knicks Go, just ran him down, turned in a gallant effort and it’s too bad he got beat. That’s a demanding track. The stretch is so long, and he ran hard.”

The 37 media members who cast a vote in this week’s poll seemed to go in a few different directions when neither of the top-ranked American runners won the rich race on Saturday. I seriously considered all three options before I emailed my ballot to the NTRA on Sunday night.

As indicated by Charlatan’s move to the top spot in the latest poll, most voters felt that the Baffert runner clearly defeated Knicks Go and thus deserved to be No. 1.

But Maxfield and Monomoy Girl both picked up additional votes as the top Thoroughbred this week. Those media members seemed to be saying that it was significant that neither Charlatan nor Knicks Go won the Saudi Cup and so they went in a different direction for their choice as the best horse in America. This week my No. 1 vote went to Maxfield.

Knicks Go’s one first-place vote most likely was based on his win in the Pegasus World Cup, which still makes him the only horse with a Grade 1 victory in 2021.

It is safe to assume that both Charlatan and Knicks Go will not race again until late spring or early summer, although the only thing at this point that Bob Baffert and Brad Cox have committed to is that their horses will return to American racing and pass on the $10 million Dubai World Cup and its 1 1/4-mile distance.

Looking ahead to the weekend, Monomoy Girl is expected to make her 2021 debut this weekend if racing is able to resume at Oaklawn Park. And with three Kentucky Derby preps on tap, the NTRA Top Three-Year-old Poll will get a lot of attention.