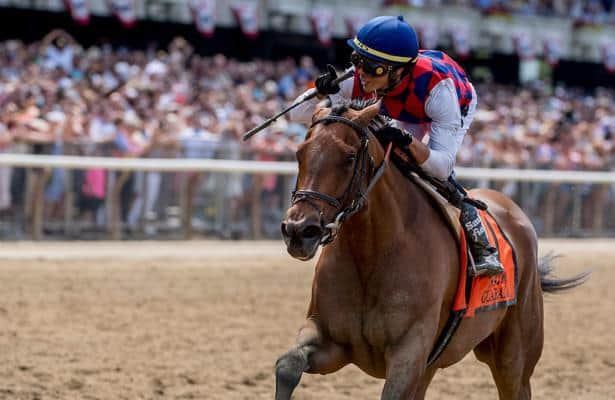 The only 3-year-old filly to ever win the Eclipse Award as Horse of the Year was Rachel Alexandra in 2009. It took her going unbeaten in eight starts that included Grade 1 victories against the boys in the Preakness Stakes, Haskell Invitational, and the Woodward.

Let me make this clear: I am not saying that a 3-year-old filly is going to be in the running for this year’s top award. However, with Dunbar Road and Guarana, Chad Brown has an outstanding pair who may soon work their way into the NTRA Top Thoroughbred Poll.

Guarana stamped herself as a breakout contender for divisional honors when she ran away to victory in the Acorn (G1), defeating the Kentucky Oaks (G1) winner Serengeti Empress by six lengths in stakes record time. The homebred daughter of Ghostzapper had previously broken her maiden on debut by more than 14 lengths at Keeneland.

“I think there was a lot of confidence that she would run extremely well, possibly win, if there wasn’t some superstar in there,” said Three Chimneys vice chairman Doug Cauthen. “But we never expected her to win by the distance that she did. She just seemed to thrive in the competition of the race.”

Then along came Dunbar Road this past weekend in the Mother Goose (G2) at Belmont Park. The daughter of Quality Road should give her stablemate some competition in the division after biding her time behind traffic, then surging for a decisive victory.

In an embarrassment of riches, Jose Ortiz rides both Guarana and Dunbar Road.

“Today was a perfect day because it was an easy race for her,” Ortiz said after Saturday's Mother Goose. “I knew with the amount of horse that I had, I was going to find something to work with. She was traveling comfortably and I felt like she was always there for me. When she got out of there, I was close to them and I just liked that she showed a good turn of foot. This will set her up for later.”

In recent history, 3-year-old fillies like Monomoy Girl last year and Songbird in 2016 have been prominent in the Top 10. Perhaps these two runners are next with Saratoga's July 20 Coaching Club American Oaks (G1) and Aug. 17 Alabama (G1) on the calendar.

In terms of this week's rankings, this was another weekend when those in the NTRA Top 10 Thoroughbred Poll were not in action. My ballot went unchanged, and there was not significant difference in the consensus -- but we head now into an influential Saturday of racing back at Belmont, where Catholic Boy is expected to lead the Suburban (G2).