Shifman: By My Standards now ranks among top older males 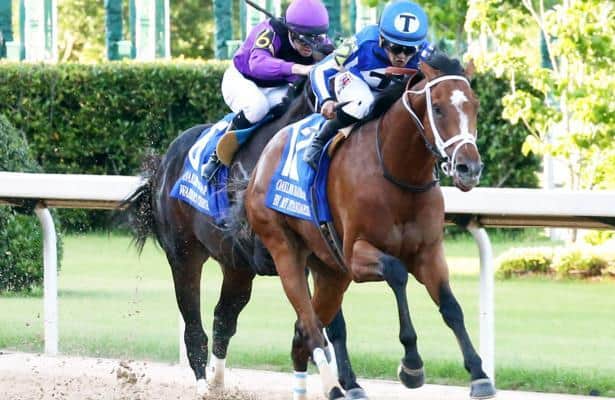 With his third victory of the year in Saturday's Oaklawn Handicap (G2), By My Standards jumped from eighth to third in the latest NTRA Top Thoroughbred Poll. His current ranking was bolstered by three first-place votes.

By My Standards returned to the races in 2020 after a nine-month layoff which followed his 11th-place finish in the Kentucky Derby. Since then, the son of Goldencents has a perfect record with victories in an allowance event at Fair Grounds before consecutive Grade 2s.

Heading up to the Oaklawn Handicap, trainer Bret Calhoun noticed that By My Standards went a bit overlooked by the betting public. He eventually headed into the starting gate at odds of 4.50-1.

All four of By My Standards' prior wins came at Fair Grounds, and he had to face a field of 13 that was loaded with graded stakes winners converging from all over the nation.

“A lot of the handicappers around the country on different shows had not given him a lot of credit or a very good chance in there,” observed Calhoun. “I definitely think he proved himself. That race and a lot of the races at Oaklawn the last month or so have been extremely deep in numbers and quality.

"Everybody will have a lot more respect for a lot of those horses coming out of those races. It was definitely a showcase race for him.”

By My Standards showed marked improvement as he made the move to graded stakes racing in the New Orleans Classic (G2), which he won by three lengths. The colt left his winter base in Louisiana to take the Oaklawn Handicap by almost two lengths. His Beyer Speed Figures have also progressed each race, from a 91 in the allowance to 98 in the Classic and now up to 102 in the Handicap.

The triple-digit figure was the highest from closing weekend at Oaklawn, where Charlatan (96) and Nadal (98) impressed when running away with split divisions of the Arkansas Derby.

By My Standards did not break his maiden until the fourth start of his career, which came in February of his 3-year-old campaign. He followed that initial victory with a 22-1 upset of the Louisiana Derby (G2) which got him a spot in the Kentucky Derby.

On the first Saturday in May in 2019, the track went sloppy due to some late afternoon rain. By My Standards didn’t get the best of trips, and Calhoun had to deal with some minor physical problems that are common with horses on the Derby trail.

“I think he could have been very, very competitive in the Derby if things had gone a little differently for sure,” Calhoun said looking back.

However, on the first Saturday in May in 2020, the 4-year-old version of By My Standards assert himself as one of the leaders on the Older Dirt Male division. In the latest NTRA poll, Saudi Cup runner-up Midnight Bisou ranked No. 1 with Mucho Gusto, a 4-year-old colt who earlier this season won the Pegasus World Cup (G1), the only other horse ahead of By My Standards.

“He probably wasn’t quite this good last year. He’s grown up and become a lot stronger horse,” Calhoun said. “But he was kind of the buzz horse going into the Derby, and he had me pretty optimistic even though we were dealing with some feet issues. Then it rained and the track and everything changed. I lost some of that optimism. Since that time, he’s progressed. He’s just a more mature, physically stronger horse.”

If By My Standards continues his development, Calhoun will be looking for a Grade 1 race this summer for his next start.

Here's an updated look at the NTRA Top Thoroughbred Poll heading into a more quiet weekend for racing. The only stakes scheduled is Gulfstream Park's Sunshine Forever, a $75,000 event on the turf that could mark Preakness Stakes winner War of Will's 2020 debut.