Shifman: It's the right kind of year for Bricks and Mortar 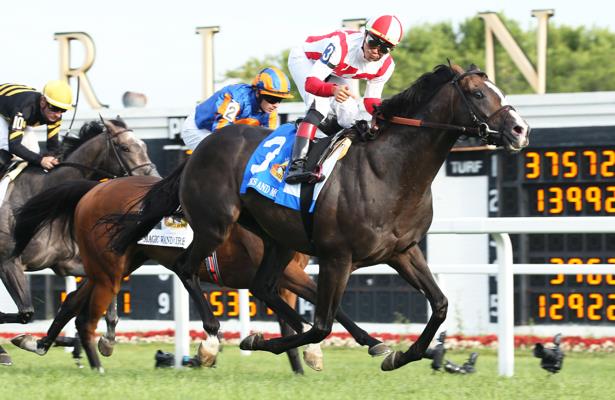 The tide turned in NTRA Top Thoroughbred Poll voting since Bricks and Mortar’s victory in the Arlington Million. The Chad Brown trainee received 36 of the 40 first-place votes that were cast when ballots were due on Monday compared to the week before when 19 top votes went to other horses.

The panel of voters was so impressed with the performance of Bricks and Mortar after his fourth Grade 1 victory of the year in Arlington Park’s signature race that McKinzie lost 12 of the 16 votes that he garnered after his big win in the Whitney (G1) at Saratoga the prior weekend.

The results of the recent poll make it clear that, right now, Bricks and Mortar has three hooves firmly gripping the Eclipse Award trophy for Horse of the Year and that it is going to be very difficult to keep the son of Giant’s Causeway from winning the honor in January.

Bricks and Mortar has now won six races in a row with his strong late kick under jockey Irad Ortiz Jr.

“The first time I got on him we won by a neck but I knew how much he had left and how special he was," the rider said. "The rest has been history. I never worry about anyone else in the race with this horse. I just concentrate on him and let him take me where he wants. When I ask for him, he’s there for me every time.”

Wise Dan was last turf horse to win the award as the country’s top Thoroughbred, and he did it back to bck in 2012 and 2013.

In the years that a male dirt horse did not win the Horse of the Year title, there was no Triple Crown winner and the Older Male dirt division had no clear-cut leader. Both of those conditions are certainly true in 2019.

In the years that Wise Dan was named Horse of the Year, he had stacked up Grade 1 victories, with four in 2013 and three in 2012. He did end both of those campaigns with a triumph in the Breeders’ Cup Turf Mile.

At this point, Bricks and Mortar has piled up enough Grade 1 scores, so history tells us that a win in the Breeders’ Cup would be enough to make him Horse of the Year.

After sweeping the Grade 1 races in Chicago this weekend, trainer Chad Brown also leads the race for the Top Trainer Award for the fourth straight year.

Sistercharlie won her second start of the season in the Beverly D. after beginning her 2019 campaign in the Diana (G1) at Saratoga. That victory was her fifth Grade 1 score in a row, and it moved her up one spot in the NTRA rankings to No. 4.

This coming weekend the $1 million Pacific Classic (G1) at Del Mar will spotlight the Older Male division as Seeking the Soul will attempt to rise up the rankings with his first Grade 1 score of the season.